Is Dick Vermeil a Hall of Fame Coach? 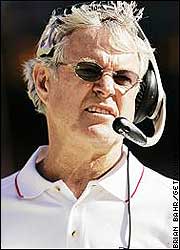 The retirement of players, the recent departure of Jacksonville receiver Jimmy Smith a perfect example, often gives rise to a debate over whether that particular individual is worthy of enshrinement into the Hall of Fame. Well, it seems we know a lot about what makes a Hall of Fame player in most sports, but what about a Hall of Fame coach? I decided to try and tackle this question by looking at the career of the recently retired Dick Vermeil and comparing his resume to the other 13 modern-era coaches in the Hall of Fame. Each coach will be listed with their regular season record, regular season winning percentage, # of division titles, # of conference titles, # of league titles (Super Bowls and NFL/AFL titles prior to the Super Bowl), playoff record, and playoff winning percentage.

Where does Vermeil stack up in each category? He actually has more total wins than Bill Walsh, John Madden, Vince Lombardi, and George Allen. However, he significantly trails each man in winning percentage. In fact, the only Hall of Fame coach who has a worse winning percentage than Vermeil is Weeb Ewbank. Of course, Ewbank did coach three championship squads (1958 and 1959 Baltimore Colts and the 1968 New York Jets). Vermeil has won the fewest division titles of any coach on this list, but those titles came with three different franchises so that has to count for something. Vermeil won more conference titles than both John Madden and George Allen, and won those titles with two different franchises. He was one league championship, giving him more than George Allen, Bud Grant, and Marv Levy. He has more playoff wins that Paul Brown, Weeb Ewbank, George Allen, and Hank Stram. It should be noted in those days that often one playoff win was all that was required for a championship since only the two best teams advanced to the postseason. Therefore, for all intents and purposes, Vermeil has more postseason wins that George Allen on this list but no one else. Vermeil's postseason winning percentage is also better than both George Allen and Paul Brown. So, let's return to the question posed in the heading: Is Dick Vermeil a Hall of Fame Coach? On the one hand, he has a Super Bowl title, but so does Barry Switzer. He has taken three teams to the postseason, including two to the Super Bowl. Hall of Famer Marv Levy was never able to get the Chiefs to the playoffs when he coached them before arriving in Buffalo., so there is something to be said for that. The Eagles and Rams were both doormats before he took over. When the Eagles made the playoffs in his thrid season (1978) it was their first postseason appearance since 1960 and their first winning season since 1966. The Rams Super Bowl triumph in his third season (1999) was their first playoff berth since 1989 and first winning season in the same span. So he does have a history of revitalizing franchises (or at least being there when they happen to revitalize). On the other hand, his career winning percentage is very low and he made only six postseason appearances in 15 seasons. Additionally, you have to factor in the slew of contemporaries he has coached against who will also be eligible for the Hall of Fame one day. Would you take him over Bill Belichick, Bill Cowher, Mike Holmgren, Bill Parcells, Tony Dungy, Jeff Fisher, Mike Shanahan, Marty Schottenheimer, Andy Reid, or Jon Gruden? In my opinion, Vermeil narrowly misses the cut for the Hall of Fame.
Posted by matt at 8:21 AM

Excellent pieces. Keep posting such kind of information on your blog. I really impressed by your blog.
Super Bowl 2012