In addition to the SDPI posts, another offseason interest of mine has been to look at how each IA conference has shaken out since 2005. I chose 2005 as the starting point because that was the year the ACC expanded to 12 teams, the Big East added 3 new members and booted Temple, Conference USA added a championship game, the Mountain West added TCU, the WAC looted the Sun Belt after several of its members joined Conference USA, and the Sun Belt added 2 independents from Florida (FAU and FIU). Since 2005, there has only been one change in any IA conference. That was the expansion of the MAC by a single team with the addition of Temple. We'll begin with a look at the ACC since 2005. And one final note, each of the statistics posted here are for conference games only (championship games excluded). Since each school plays a vastly different non-conference schedule, this offers a better standard of comparison. First here are the cummlative ACC standings since 2005. 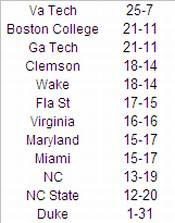 It should be no surprise that the team with 3 ACC Championship Game sppearances (2 victories) leads the pack. The ACC teams are clustered around mediocrity. The middle 8 teams (from Clemson/Wake Forest to NC State) are within 6 wins of each other. That is mostly due to the veritable bye week that has been the Duke Blue Devils who are an improbable 1-31 in conference play the past 4 seasons. 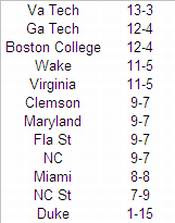 It's no surprise that the team with the best record overall (Virginia Tech) has protected its homefield exceptionally well. One of the most amazing stats is Clemson's home record. The Tigers home record and road record are identical over the past 4 seasons (9-7). Most casual observers probably would have pegged Death Valley as one of the toughest places to play in the league. Who has benefitted the most from their homefield? I would say it is either North Carolina or Virginia. North Carolina is a solid 9-7 at home over the past 4 seasons, but a poor 4-12 away from Keenan Stadium. Virginia is also a robust 11-5 at home, but only 5-11 on the road.

Now here is how homefield advantage shakes out in the ACC (in conference play only) with respect to the nation at large (with rank out of the 11 IA conferences in parentheses).

As you can see the ACC is usually in the top quartile of homefield advantage (until 2008). Overall, the home team in ACC conference games has won about 58% of the time. If we remove Duke's record, that number jumps to 62.5%.

Next up is how each ACC team stacks up offensively for each season. This is the ranking of yards per game in conference play. 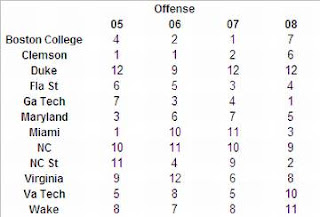 For all the flak Rob Spence has gotten for being a bubble-screen calling moron, his teams consistently fielded top-flight offense in his first 3 seasons. Suprisingly, in 2008, when he was fired about halfway through the year, the offense had its worst finish in the past 4 seasons. In 2005, Spence was hailed as a fecund coordinator, coming over from Toledo, who was poised to take the Tigers to the next level. By 2008, there were some serious grumblings that the offense bogged down against the better teams on the schedule. Is this true? Or did Spence hve an unfair reputation for choking in big games? To attempt to answer that I looked at Clemson's yardage numbers from 2005-2007 (the 3 full seasons where Spence was offensive coordinator) and calculated Clemson's yards per game numbers against 'good defenses' ranked (1-3 in the conference), 'solid defenses' (ranked 4-6 in the conference), 'below average defenses' (ranked 7-9 in the conference), and 'bad defenses' (ranked 10-12 in the conference). The results are in the table below.

These results seem to back conventional wisdom that Spence and the Tigers dominated inferior competition, yet struggled mightily moving the ball against better defenses. Some other nuggets: We see the improvement of the Boston College offense with Matty Ice, culminating with the top-ranked attack in 2007, and returning to Earth sans the first round pick in 2008. We also see the precipitous fall from grace of the Miami offense, despite the fact that Kyle Wright was the primary maestro of the offense in 2005, 2006, and 2007. After his departure, the offense again returned to prominence in 2008. 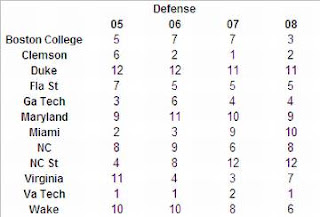 Not surprisingly, Virginia Tech rates as the best defense in the conference for 3 of the past 4 seasons. In the lone season they did not post the number 1 defense, they were runner up to Clemson. And speaking of the Tigers (once again, sorry), its clear Vic Koenning, for all his failures as a head coach, is one helluva a defensive coordinator. He became defensive coordinator at Clemson prior to the 2005 season, and after a solid start, his defenses have been consistently among the best in the league. Kansas State made a great hire in picking him up.
Posted by matt at 4:13 PM

Virginia Tech’s lack of passing attack did not affect them. If you run the ball well and defend against the run well, you have a good chance at winning the game. The Hokies do both well.

I don't know if I would say VT runs the ball well. They've averaged under 4 yards per carry the past 3 seasons. What they do well is shut down the run and pass and play great special teams.

I will be back often.

Thanks for the kind words Corey.