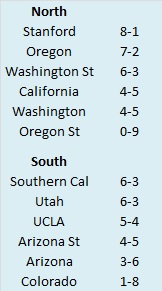 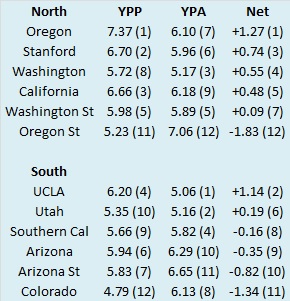 College football teams play either eight or nine conference games. Consequently, their record in such a small sample may not be indicative of their quality of play. A few fortuitous bounces here or there can be the difference between another ho-hum campaign or a special season. Randomness and other factors outside of our perception play a role in determining the standings. It would be fantastic if college football teams played 100 or even 1000 games. Then we could have a better idea about which teams were really the best. Alas, players would miss too much class time, their bodies would be battered beyond recognition, and I would never leave the couch. As it is, we have to make do with the handful of games teams do play. In those games, we can learn a lot from a team’s Yards per Play (YPP). Since 2005, I have collected YPP data for every conference. I use conference games only because teams play such divergent non-conference schedules and the teams within a conference tend to be of similar quality. By running a regression analysis between a team’s Net YPP (the difference between their Yards per Play and Yards per Play Allowed) and their conference winning percentage, we can see if Net YPP is a decent predictor of a team’s record. Spoiler alert. It is. For the statistically inclined, the correlation coefficient between a team’s Net YPP in conference play and their conference record is around .66. Since Net YPP is a solid predictor of a team’s conference record, we can use it to identify which teams had a significant disparity between their conference record as predicted by Net YPP and their actual conference record. I used a difference of .200 between predicted and actual winning percentage as the threshold for ‘significant’. Why .200? It is a little arbitrary, but .200 corresponds to a difference of 1.6 games over an eight game conference schedule and 1.8 games over a nine game one. Over or underperforming by more than a game and a half in a small sample seems significant to me. In the 2015 season, which teams in the Pac-12 met this threshold? Here are the Pac-12 teams sorted by performance over what would be expected from their Net YPP numbers. 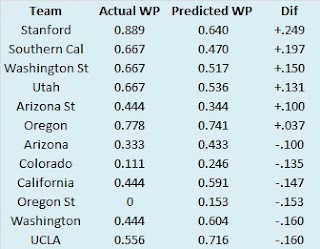 Stanford was the sole Pac-12 team to significantly over or under shoot their expected record based on YPP. How did the Cardinal manage to do this? Well, it is a bit of a mystery. The Cardinal won eight conference games, with seven coming by at least ten points, which indicates they were pretty dominant. Their lone conference loss came by just two points and they actually had a negative in-conference turnover margin. So why don’t their YPP numbers indicate a dominant team? I think the answer lies in the one game they lost. While the Cardinal fell to Oregon by just two points on a failed two point conversion, the YPP numbers in the game were much starker. Oregon averaged over nine yards per play and outgained the Cardinal by three yards per play on average. Remove that game and Stanford’s YPP numbers are +1.15 instead of their solid, but hardly elite +0.74.

Speaking of Oregon and Stanford, even casual college football observers know they have dominated the Pac-12 North since the conference split into a pair of divisions beginning in 2011. Either the Ducks or Cardinal have won the North each season and gone onto defeat the South champion. The South on the other hand, has never had a repeat champion (UCLA appeared in the title game for two consecutive years thanks to postseason ineligibility at the other Los Angeles school) and four of the division’s six schools have represented the South in the title game in five seasons of divisional play. A half-decade into the new incarnation of the Pac-12, I wanted to take a look back and see which school has been the best in the South. Pac-12 teams play nine conference games, which includes four games against teams from the North. As those games can vary from very difficult (Oregon and Stanford) to piece of cake (Oregon State in 2015), I decided to look at only intra-divisional games. In other words, I only looked at contests involving Pac-12 South teams. The year by year and overall results are listed below.

There has been a great deal of parity at the top of the Pac-12 South. Arizona State, Southern Cal, and UCLA are separated by just a single game with the Bruins ranking as the best of the Pac-12 South five years in. Arizona has been middling, while conference newbies Colorado and Utah have struggled, especially the Buffaloes. After beating Utah to end the 2011 regular season, Colorado is in the midst of a 20-game losing streak to divisional foes. Yikes! Somewhere Gary Barnett is smiling. Or more likely, looking the other way while sexual assaults happen.
Posted by matt at 6:05 PM