Last week we looked at how teams that were unanimous preseason choices to win their conference or division (by mainstream magazines and computer models) performed. This week, we are going to look at how the unanimous last place teams pegged by the preseason consensus performed. Will their performance offer hope to unanimous last place selections in 2019 or should Illinois, Kansas, Oregon State, Rutgers, and San Jose State fans cryogenically freeze themselves until 2020 (or later)? Read on to find out.

Between 2005 and 2018, only seven G5 teams were unanimous preseason selections to finish last in their respective conference or division. They are listed below. 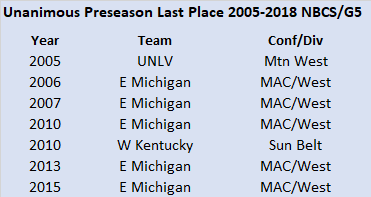 Were I Chris Creighton’s agent, I might use this list to show just how much he has accomplished (two bowl bids in the last three seasons) since taking over at Eastern Michigan in 2014. Since 2005, Eastern Michigan has been the consensus unanimous last place team in the MAC West five times. In the totality of the mid-major universe, only two other teams have been unanimous last place selections. So how did those unanimous selections do?

It’s hard to gleam a great deal from a sample of seven teams, especially when five of them are the same program, but six of the seven teams lived down to their preseason expectations by finishing in last place. The best finish of any of the seven teams was by Eastern Michigan in 2007. The Eagles went 3-4 in MAC play (MAC teams did not play a uniform schedule of eight conference games in 2007) and finished tied for third in the West division.

Between 2005 and 2018, 24 P5 teams were unanimous preseason selections to finish last in their respective conference or division. They are listed below. 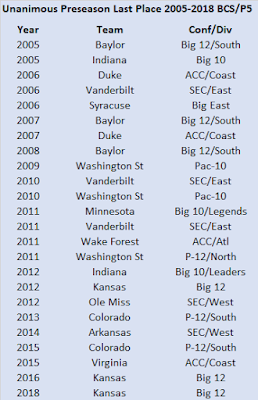 If you are keeping score at home, Baylor, Kansas, Vanderbilt, and Washington State all finished tied for the most unanimous last place selections with three apiece (although Kansas has unofficially added a fourth in 2019 based on preliminary data). Duke, Colorado, and Indiana are the only other P5 teams with multiple appearances. So how did these P5 teams do? 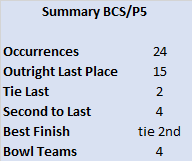 17 of the 24 teams finished last, with 15 finishing alone in last place. Another four teams finished second to last meaning only three finished a safe distance from the basement. However, four of the unanimous selections for last place played in bowl games, so I thought it might be useful to examine them to see if they shared any common trait that might provide hope to the 2019 teams.

2011 Wake Forest 6-7 overall, 5-3 ACC, tied for second in ACC Atlantic
While the Demon Deacons finished with a losing overall record, they nearly won the Atlantic Division. Wake led eventual champ Clemson 28-14 late in the third quarter, but the Tigers scored the last 17 points to take the game and division. Wake had cratered the year before (3-9 overall and 1-7 in the ACC) to tamp down expectations, but the Deacons had been a consistent bowl threat under then-coach Jim Grobe, winning at least five games in seven of his previous ten season heading into 2011.

2011 Vanderbilt 6-7 overall, 2-6 SEC, tied for fourth SEC West
After making their first bowl game since 1982 in 2008, the Commodores had lost 15 of 16 SEC games between 2009 and 2010. New coach James Franklin began his tenure in Nashville by winning his first three games, but the Commodores dropped six of their next eight (with four of those defeats coming by six points or less) to stand 5-6. The Commodores would need to win their season finale at Wake Forest (see previous entry) to clinch bowl-eligibility (in a game I attended). It’s been almost eight years, but I am still a little bitter. The Commodores led 27-7 at halftime and my dad and I left late in the third quarter after the Commodores scored to go up by 27 points. All we missed on the two hour ride back home was another Vanderbilt touchdown.

2012 Ole Miss 7-6 overall, 3-5 SEC, tied for fifth SEC West
After returning to relative prominence in 2008 and 2009 (remember when some prominent folks picked Ole Miss to win the SEC West in 2009?), the Rebels lost 15 of 16 SEC games between 2010 and 2011. The hired Arkansas State coach Hugh Freeze to turn the program around and win with integrity. Despite the six losses, the Rebels came very close to shaking up the national landscape. They nearly beat Texas A&M in Johnny Manziel’s Heisman season and almost upset LSU in Baton Rouge. They did clinch bowl eligibility by beating a ranked version of their hated rival in the Egg Bowl.

2014 Arkansas 7-6 overall, 2-6 SEC, last SEC West
Bret Bielema’s second team entered the 2014 season on a nine-game losing streak. They finished the year as probably the best last place team of all time. Some metrics placed the Hogs in the top-fifteen that season. The Hogs lost by one point to eventual SEC champ Alabama, by seven to then top-ranked Mississippi State, by seven to SEC East champ Missouri, while beating ranked LSU and Ole Miss teams by a combined score of 47-0.

So what can we take away from this exercise? Preseason publications and computer models have done a good job when they coalesce around a unanimous last place selection. That does not bode well for Kansas, Illinois, Oregon State, Rutgers, or San Jose State. However, for G5 teams, the sample size is so small (just seven teams total and two outside of Eastern Michigan) that San Jose State fans (if any) should not abandon all hope. As for P5 teams, four of 24 were able to beat the odds and qualify for a bowl game. This should give fans of Kansas, Illinois, Oregon State, and Rutgers a modicum of hope. Of those four, which is most likely to surprise in 2019? Three of the four unanimous last place selections to surprise were led by relatively new coaches (Franklin and Freeze were in their first seasons at Vanderbilt and Ole Miss while Bielema was in his second at Arkansas) and the fourth was led by a coach with a previous track record of success at his school (Grobe at Wake). Lovie Smith and Chris Ash are entering their fourth season at Illinois and Rutgers so I would throw those two out. Les Miles is in his first season at Kansas and has successful stints at Oklahoma State and LSU on his resume, but one of those is a true blue blood program and the other, while certainly a rebuilding job, is nothing like the task he faces at Kansas. Plus, his offenses at LSU were antiquated and boring despite the great talent he brought in. Thus, were I forced to choose, Oregon State would be my selection. The Beavers are coached by Jonathan Smith, who happens to be an alum, so he is familiar with the limitations of the program. He is in his second season, so he is still fresh, and his expertise is on the offensive side of the ball (played quarterback in college and was offensive coordinator prior to getting this job), an area where underdogs stand a better chance of outperforming their pedigree and recruiting rankings. This is in no way a prediction of Oregon State eking out a bowl bid in 2019, just an acknowledgement that of the other teams expected to be awful, they have the best chance of exceeding those low expectations.
Posted by matt at 3:52 AM