The offseason tradition continues. Today I proudly bring you, dear readers, the first installment of SDPI. For those new to the site, SDPI is my own personal rating system, stolen from Eddie Epstein, that I use to evaluate teams in each of the nation's 11 IA conferences. We'll begin, as always, with the BCS conferences and tackle those alphabetically before moving on to the so-called mid-majors. Without further adieu, here is the 2010 incarnation of the ACC in SDPI form. If you're interested, here's the link to last year's ACC article. 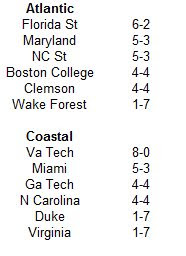 Now here are the 2010 ACC SDPI standings. The standings are sorted by division by total SDPI with ranking for each category (out of 12 teams) in parentheses. 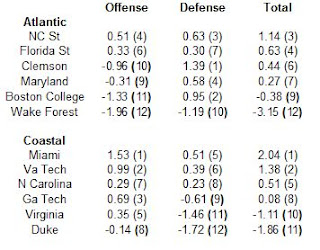 2010 was a somewhat historic year for the ACC. For the first time since 2000, the ACC champion managed to navigate through the conference season without a loss. However, unfortunately for the reputation of the league, its champion also lost a non-conference game to James Madison. For the ACC Champion Virginia Tech Hokies, 2010 marked the first undefeated league campaign since their Michael Vick-led siege of the Big East in 1999.

So Who Was Better Than Their Record Showed?
According to SDPI, Miami was the league's best team by a significant margin. However, the Hurricanes lost at home to the two teams that played in the ACC Championship Game, and for good measure, decided to give Virginia their only league win. Why did Miami fair so poorly (relatively) despite glistening SDPI numbers? Turnovers, plain and simple. 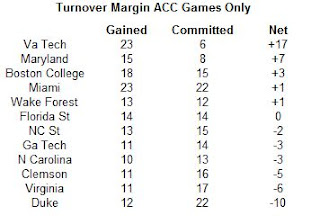 While their turnover margin was not terrible, their volume of turnovers was. Miami matched Duke with 22 turnovers in 8 conference games. Quarterbacks Jacory Harris and Stephen Morris played fast and loose with the football, throwing 12 interceptions in ACC play between them. However, what was especially damaging to the Hurricanes chances was that the turnovers came in bunches. In two of their league losses, to Virginia and Virginia Tech, the Hurricanes committed 11 turnovers (half of their league-leading total). That promiscuity with the pigskin is what cost Randy Shannon his job (the Hurricanes added 7 more turnovers in non-conference losses to Ohio State and South Florida) and is something new coach Al Golden will need to correct if he is to take Miami to their first ever ACC Championship Game.

So Who Was Worse Than Their Record Showed?
Scroll back up and look at that turnover margin table. I'll give you a minute. Virginia Tech was an amazing +17 in turnovers in ACC play with just 6 turnovers committed! That's how you go undefeated despite solid, but unspectacular SDPI numbers. But that's Beamer Ball right? Virginia Tech always has ridiculous turnover margins.

While the Hokies are usually rank near the top of the ACC in turnover margin, that +17 number from 2010 appears to be a bit of an outlier. While the Hokies boasted a comparably fantastic margin in 2007, it shrunk from outstanding, to merely good in 2008. I would expect a similar result in 2011.

Best Offense: Miami 1.53
When they weren't turning the ball over, the Hurricanes were moving the ball with relative ease. Their lowest yardage output came in the conference opener against Clemson when they managed only 376 yards. If they had only averaged that number all season, they would have still ranked 8th in the conference.

Worst Offense: Wake Forest -1.96
After bidding adieu to one of the school's best quarterbacks in Riley Skinner, the Deacons struggled profoundly moving the ball in 2010. After opening conference play with 54 points in a win over Duke, the Deacons would manage just 55 total points in their next four conference games.

Best Defense: Clemson 1.39
The Tigers continued their run of outstanding play on the defensive side of the ball in 2010. Clemson has ranked either first or second in the ACC in defense each of the past five seasons.

Worst Defense: Duke -1.72
Outside of 2009, when they somehow ranked 8th, the Blue Devils have been either last or second-to-last in the ACC in defense every year since 2005.

The Descent
It was under-reported, at least by most of the college football media, but I found it interesting that both 2009 ACC Championship Game participants (Clemson and Georgia Tech) stumbled in 2010. Both posted losing overall records for the first time since 1998 (Clemson) and 1996 (Georgia Tech) respectively. Both slipped thanks to just one side of the ball. For Georgia Tech, it was their defense, which became a sieve. Their potent triple option offense was strong, but unable to compensate for their defensive shortcomings. For Clemson, it was their offense, which crumbled, and wasted the best defense in the ACC. Clemson's fall can be attributed to perhaps the most important aspect of modern football, the forward pass.

Quarterback Kyle Parker deferred a few million dollars in order to return to Clemson, and he hoped, bring an ACC title to Death Valley. Unfortunately, Parker regressed in his return, and the Tigers could never realistically entertain thoughts of an ACC championship. Parker's completion percentage declined a little, but the significant declines came in his yards per attempt and touchdowns. Without a big play receiver (like Jacoby Ford or CJ Spiller), Clemson was unable to generate big plays in the passing game. They also had a very tough time scoring. 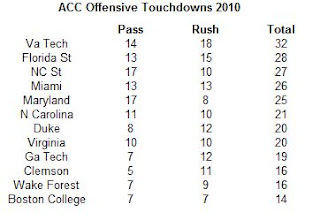 The Tigers were anemic moving the football (as seen in their SDPI numbers), and they were equally inept scoring touchdowns. Their 16 total touchdowns in eight league games tied for second fewest in the conference with Wake Forest. Plus, the Tigers had by far the fewest passing touchdowns. Even the woeful passing attacks at Wake Forest and Boston College had more, as did the team that ran the ball on virtually every snap (Georgia Tech). Of course, all the blame should not fall at the feet of Kyle Parker. The Tigers top quartet of receivers in 2010 (DeAndre Hopkins, Jaron Brown, Dwayne Allen, and Jamie Harper), had a combined 28 receptions heading into 2010. All four return in 2011, so even without Kyle Parker, the Clemson offense has a good chance of improving even as they must break in a signal caller.
Posted by matt at 1:46 PM No comments: 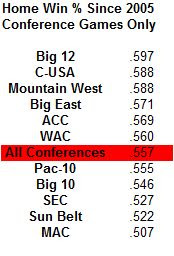 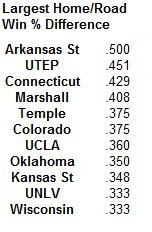 While Jonesboro, Arkansas may not be the most difficult place to win (I would say Boise, Norman, Fort Worth, or Columbus are the most arduous venues for visitors) it has conferred a significant advantage to Arkansas State when compared to the team's road performance.
Posted by matt at 10:57 AM No comments: