We caught some breaks (thanks for the backdoor Illinois) and posted our best week of the year. Let's follow that up with another winning week. As always, home teams in BOLD.
Last Week: 6-1
Overall 47-37 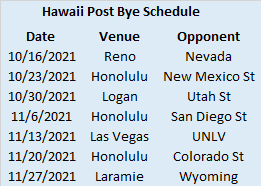 After upsetting Colorado State last week, I think the Warriors are out of gas and will lay down in this spot. Plus the trends also point to an easy Wyoming win. The Cowboys are 10-4 ATS as a home favorite under Bohl while the Warriors are 1-6 ATS as a road underdog under Todd Graham. Take the Cowboys to win easily.
Western Kentucky +1 Marshall
Last week's marque Conference USA game was confined to ESPN+ (and ended up being one of the best games of the weekend). At least this week, the game will be on cable as CBS College Sports gets this battle for the East division crown in Conference USA. Since Western Kentucky joined Conference USA in 2014, the Hilltoppers and Thundering Herd have both won two East division crowns (FAU also has two), so this will break the tie. The series has also been pretty competitive with Marshall winning four of the seven contests outright (the past four), but only covering once (last year). Western Kentucky is actually 2-2 in Huntington (covering all four times), which includes an instant classic from their first meeting in 2014. Obviously, those games from several years ago will have little impact on this one, but it does show that a victory by Western Kentucky would not be the most shocking result of the weekend. That is especially true when you note how well the Hilltoppers have played since they began the season 1-4. Two of those losses were to teams currently ranked in the AP Poll, another was a tight home loss to a Power Five team, and the fourth was on the road against a service academy. Since that 1-4 start, the Hilltoppers have averaged 44 points per game and their defense that was a liability in the early going, has allowed under twenty points per game. Granted the competition has not been strong, but that is what you get in Conference USA, arguably the weakest FBS conference. Marshall has handled their business against the dregs of Conference USA as well, winning their five conference contests by an average of 22 points per game. However, they also dropped a home game to the best Conference USA team they have faced thus far (UAB), so don't be afraid to back a road team in Huntington. Western Kentucky will score a lot and their defense has improved enough to get the stops needed to win this game.
Penn State -1 Michigan State
Ohio State peeled back the curtain last week and exposed Michigan State for a fraud. The Spartans entered with one loss, but probably should have had two or three more (Nebraska, Indiana, and Michigan) if not for some non-offensive scores and questionable officiating. The great start made Mel Tucker a hot commodity. His bank account is certainly better for it, but we'll see how happy Michigan State is in a few years when they realize they broke the back for a coach with a 7-12 overall record heading into 2021. James Franklin also added some money to his coffers, but at least he is the proud owner of a Big 10 title (not to mention unprecedented success at Vanderbilt). But I digress. After a hot start, Penn State has lost four of their past six games. But lets look at the teams that beat Penn State. Every team that has beaten Penn State this season either plays pretty good defense (Illinois, Iowa, Michigan, Ohio State) or is one of the best teams in the country (Michigan and Ohio State). I can hear the Michigan State fans now. But we beat...Yes, you did beat Michigan. That is one of eleven data points for both teams. The other ten all point to Michigan being the superior team. And in case you missed last week's game, Michigan State is not very good at defense. There are four Big 10 teams with a worse per play defense in (Big 10 games) than the Spartans. Those teams are Maryland, Northwestern, Purdue, and Rutgers. Meanwhile, Penn State has the second best per play defense in the Big 10 (Wisconsin). I think they shut down the explosive Michigan State run game and leave East Lansing with a win.
California +7 UCLA
College football fans were a little too eager to jump on the UCLA bandwagon this year. The Bruins were better than their record a year ago, having posted a 3-4 record with the four defeats coming by a combined fifteen points. When they opened 2021 by blowing out Hawaii and upsetting LSU, we figured they were back. Well, about that. It's great that UCLA has clinched a winning record for the first time under Chip Kelly, but take a look at who those wins have come against. I'll wait. 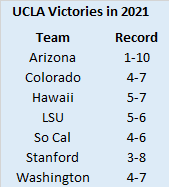 The best team they have beaten is either LSU or Southern Cal. Their other Pac-12 victories (and Hawaii) have all come against bad teams. Give the Bruins credit for winning those games (something they hadn't done in Kelly's first three seasons), but is this a team you really want to lay a touchdown with? The defense is still below average (we'll be kind and not call them bad) and the Bruins have a history of losing home games they were supposed to win under Kelly. The Bruins are 4-9 ATS as a home favorite and have lost outright seven times (three times this season)! Meanwhile, Cal still has the stench of their Covid aided loss to Arizona hovering around the team. However, even with that loss factored in, the Bears have been better than the Bruins on a per play basis in the Pac-12. Cal has outgained their conference foes by more than a yard per play while UCLA is barely above water in that statistic. In addition, Cal has been superb as a road underdog under Justin Wilcox, posting a 14-4 ATS record with seven outright wins. With their rescheduled game with Southern Cal on deck next week, Cal still has a shot at getting to a bowl game, so they should be motivated against their more hyped ursine rivals. Take Cal to cover and potentially win the game outright.
Posted by matt at 3:51 PM No comments: 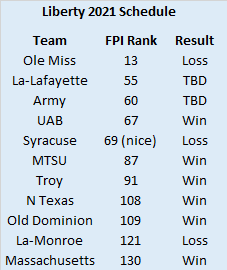 They have beaten up on bad Conference USA and Sun Belt teams. The Flames were legitimately impressive last season, beating two ACC teams on the road and nearly beating a third before upsetting unbeaten Coastal in the Cure Bowl. The Flames do have a somewhat impressive road win against UAB, but otherwise their victories have been lackluster, and they somehow lost to Louisiana-Monroe as a massive favorite. The culprit for their decline is the offensive line which has allowed 38 sacks this season. Only five teams have allowed more. Louisiana-Lafayette isn't great at rushing the passer, but they do have 26 sacks on the season (tied for 34th nationally). They should get to Malik Willis a few times and stall out some Liberty drives. Plus, while the Ragin' Cajuns already have their half of the Sun Belt locked up for the fourth straight year, Billy Napier is also auditioning for bigger jobs, so they should be motivated to win this late season non-conference game and maintain their national ranking. Under Napier, the Ragin' Cajuns are 5-1-1 ATS as a road underdog against Group of Five teams with three outright wins. I think they get their fourth in Lynchburg.
Cal-1.5 Stanford
Why is this line so low? I think Cal should be favored by at least a field goal despite travelling to Stanford for The Big Game. The rivals managed to squeeze the game in last season despite the abbreviated schedule. Cal lost a heartbreaker thanks to a missed extra point. The Bears head into this game off an embarrassing loss to Arizona and a Covid-related postponement against Southern Cal. The loss to Arizona, while embarrassing, can be mostly blamed on Covid. The Bears were missing a lot of their roster and Arizona still had to sweat out a win at home. Most of those players are expected to be back this week, so if Cal is at full strength, or at least a partial approximation of it, they should handle Stanford. The Cardinal somehow managed to take down Oregon almost two months ago, but have not won since, dropping five straight. Their defense has been particularly ghastly in the losing streak, allowing nearly 34 points per game and 6.7 yards per play. With seven losses, the Cardinal are out of bowl contention, while Cal still has a faint shot at bowl eligibility. Cal should bounce back after their Covid struggles and win their fourth game of the season.
Posted by matt at 3:17 PM No comments:

That makes two losing weeks in a row. We'll try to close the regular season strong. As always, home teams in BOLD.
Editor's Note: I made a change to the picks after posting this on Wednesday. I took Hawaii +3 off and added UCF +7. We'll see if my change of heart made any difference.
Last Week: 2-5
Overall 37-33

Regression finally came for me. Hopefully we can get back in the groove and bounce back this week. As always, home teams in BOLD.
Last Week: 2-5
Overall 35-28