I know March Madness is ramping up and the Final Four is almost set, but lets go back and remember the legends of this past fall. Our second SDPI recap focuses on the Big East, a conference in flux in both membership and nomenclature. To get you on the up and up, here is a link to last year's Big East post.

And here are the 2012 Big East SDPI standings. The standings are sorted by total SDPI with ranking for each category (out of eight) in parentheses. 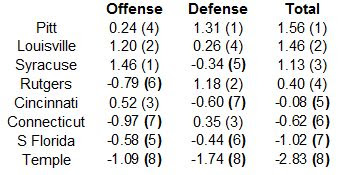 Things were pretty tight at the top of the Big East in the real standings (more on that later) and the SDPI ratings. Four teams tied for the conference crown while three teams finished at least one standard deviation above average.

So Who Was Better Than Their Record Showed?
The Pitt Panthers opened the season by losing at home to IAA Youngstown State in grisly fashion. They one-upped that performance by opening conference play with three consecutive losses (to three of the four co-champions), but rebounded to win three of their final four conference games (all by at least three touchdowns) and give unbeaten Notre Dame a real challenge in South Bend. The Panthers were dominant over the final half of the Big East season, but theat performance could not make up for the huge hole they dug for themselves.

So Who Was Worse Than Their Record Showed?
Louisville is the easy answer here. The Cardinals were hardly a top-15 team, but an easy schedule, a 6-1 record in one-score games (3-1 in the Big East), and a bowl upset will have this team drastically overrated heading into 2013. Temple was also much worse than their record. While the Owls managed just two wins in their return to the Big East, things could have easily been much worse. Their two wins came by a combined twelve points, while their five losses came by 125 points.

Best Offense: Syracuse 1.46
Behind senior quarterback Ryan Nassib, the Orange won their second bowl game in three seasons and tied for the league crown. The job this team did in winning eight games cannot be understated. Of their thirteen games, twelve were against teams from BCS conferences and eight were against teams that qualified for bowl games.

Worst Offense: Temple -1.09
The Owls began conference play by racking up 37 points in a home win over South Florida. Over their final six conference games, they averaged just 15.2 points per game.

More Ties than a Board Room and The World Cup Combined
The Big East accomplished something pretty special in 2012. Four teams, or exactly half of its membership, shared the league championship. Louisville, Cincinnati, Rutgers, and Syracuse all finished with identical 5-2 records. This was historic for several reasons. It marked the third consecutive year there has been at least a three-way tie atop the standings. In 2010, Connecticut, Pitt, and West Virginia all finished 5-2 with the Huskies, by far the worst of the three teams claiming the league's BCS bid thanks to having beaten both the Panthers and Mountaineers. In 2011, Cincinnati, Louisville, and West Virginia all finished 5-2 with a perfect rock/paper/scissors round robin result (Cincinnati beat Louisville who beat West Virginia who beat Cincinnati). West Virginia won the tiebreaker thanks to their loftier BCS ranking and annihilated Clemson in the Orange Bowl. Not only was this the third straight year the Big East had a mess at the top of the standings, but it was also just the second time in the BCS era (since 1998) that four teams finished tied atop the standings in a BCS conference. Care to guess when the other time was? It was another year of transition for the Big East conference. Miami and Virginia Tech pulled a Clarence Carter and slipped away to the ACC. Boston College was set to join them. The Big East had added Connecticut and was in the process of adding Cincinnati, Louisville, and South Florida whilst giving Temple the boot. Yes, 2004 was a strange time. The league had just seven teams, but amazingly, four teams (Boston College, Pittsburgh, Syracuse, and West Virginia) all shared the league crown. In 2013, neither of those four teams will be members of the Big East. Look back with awe and reverence on the 2012 Big East. With the ACC, Big 10, Pac-12, and SEC all playing championship games, and the Big East set to follow suit in the near future, it may be a long time before we see another four-way tie in a major conference.
Posted by matt at 12:21 PM No comments: 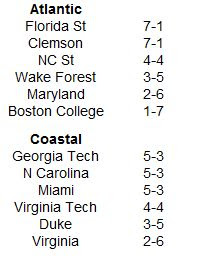 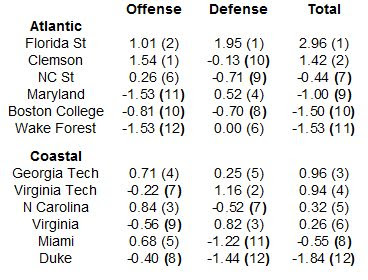 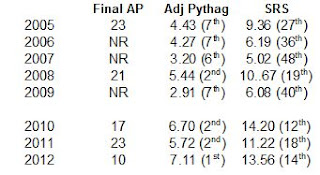 There is no doubt the Seminoles have improved after putting the old figurehead out to pasture. Florida State has finished the season ranked in the AP Poll for three consecutive years after finishing unranked in three of Bowden's final five seasons. The Seminoles have also consistently been among the best teams in the ACC during Fisher's brief tenure, ranking either first or second in Adjusted Pythagorean Record. Finally, the Seminoles have finished in the top-20 of the SRS for three consecutive years after accomplishing this just once in Bowden's final five seasons. While they may not be the devourer of worlds they were in the late-90's, the Seminoles have at least returned to a state of contention, both in the ACC and nationally.
Posted by matt at 2:33 PM No comments: