Perhaps one of the more ubiquitous themes I have promulgated in the nearly seven years I have been writing this blog is that close game are a crap shoot. Good teams don't win more close games than bad teams. Close game success is not correlated across seasons, or even within seasons. Et cetera, et cetera. However, one of the things I have never analyzed is exactly many games teams that are either exceedingly lucky or unlucky tend to win the next season. Well, now I can cross one thing off my bucket list. In this analysis, I looked at all team seasons from 2005-2010 and calculated their performance in close conference games (games decided by one score -- eight points or less). Once this was complete, I looked at how the best and worst teams (in terms of close game record) fared in their conference during the season in which they had a great or poor record in close games and the subsequent season. In order to only examine those teams that enjoyed significant success or lack thereof in close games, teams had to be at least two games better or worse than expected (expected record .500). For example a team that goes 4-0 is two games better than expected (expected record of 2-2) as is a team that goes 5-1 (expected record 3-3) and vice-versa (0-4 and 1-5). I looked only at conference record in close games because teams often play extremely divergent non-conference schedules. Conference schedule strength on the other hand, remains relatively constant. I also decided to differentiate between BCS and non-BCS conferences based on the assumption that the non-BCS conferences would have greater shifts in year-to-year conference record thanks to a much less intrinsic ruling class. So with that out of the way, here are the results. First, the lucky BCS conference teams. 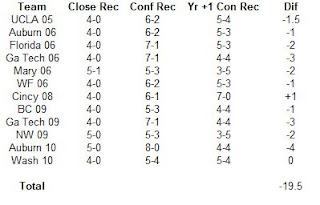 We're dealing with a much smaller sample size here, but four of the five teams improved, some (Arkansas and Michigan State) significantly. Only one team declined. In the aggregate, the teams improved on average by nearly two games in conference play the next season. 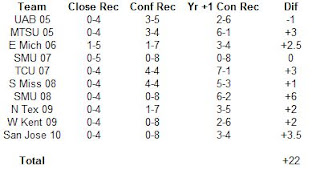 Of the ten unlucky teams, eight improved the following season and only one (UAB) declined. In the aggregate, the teams improved by 2.2 games in conference play the next season. That's higher, but not extremely different from the improvement by the BCS conference teams (1.9).

So, with this information at hand, who is poised to make a significant splash in 2012 and who may come in a little over-hyped and is likely to take a step back? The only lucky BCS team from last season was Kansas State. The Wildcats went 6-1 in close Big 12 games last season on their way to a 7-2 runner-up finish.

There were two lucky non-BCS conference teams, with Marshall (4-0) and Utah State (5-1) posting great close game conference records. Marshall needed every win they could muster as they went just 1-3 in conference games decided by more than one score.

The unlucky BCS conference teams were headlined by Ohio State. The Buckeyes went 1-5 in close Big 10 games (each of their league losses was close) as they finished below .5oo in the conference for the first time since 1999. With a new proven coach (Mr Meyer) the Buckeyes should be poised for a return to glory even if they are ineligible for the postseason in 2012. The Miami Hurricanes were also a tough luck 1-5 in close league games and the South Florida Bulls were 0-4 in close Big east games as they missed out on a bowl for the first time since 2004. Vanderbilt was also 0-4 in close SEC games, losing in heartbreaking fashion to Arkansas, Florida, Georgia, and Tennessee.

The only unlucky non-BCS conference team was Central Florida. The Knights dropped all four of their close Conference USA games and compounded their troubles by losing two close non-conference games (to BYU and Florida International) to miss out on a bowl for the first time since 2008. Look for the Knights to contend for the Conference USA crown in 2012.
Posted by matt at 1:58 AM No comments: