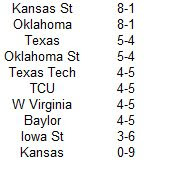 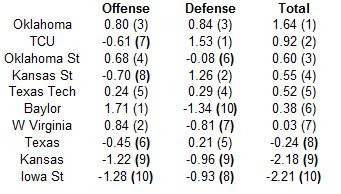 We're almost five months away from any real amateur football (at least outside of Auburn) being played, but hopefully these SDPI recaps can keep you satiated. This week, we turn our attention to the nation's heartland, and the Big 10. 2013 will mark the final year of the Big 10 featuring twelve member schools (this incarnation will have lasted only three short seasons) as Rutgers and Maryland will join for the 2014 season. To catch you up, here is a link to last year's Big 10 post. 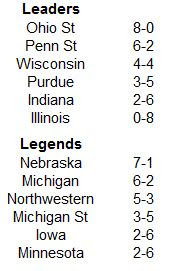 And here are the 2012 Big 10 SDPI standings. The standings are sorted by division by total SDPI with ranking for each category (out of 12 teams) in parentheses. 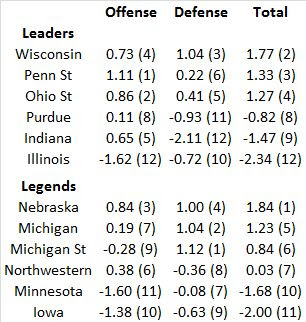 Thanks to imposed sanctions at Ohio State and Penn State, the top-two teams according to SDPI were able to meet in the Big 10 Championship Game. Unfortunately, for the top-rated Huskers, the results from that game were quite forgettable. Wisconsin rolled up 70 points en route to their third consecutive Rose Bowl appearance. Now if they could just win one of those games...

So Who Was Better Than Their Record Showed?
Wisconsin lost six games in 2012, a total very unbecoming of a champion from a major conference, much less a Rose Bowl participant. However, each loss came by seven points or fewer, and an amazing four losses came by exactly a field goal. In their four Big 10 losses, the combined margin of defeat was 16 points. None of their four Big 10 wins came by fewer than 17 points. Wisconsin bludgeoned the teams they were superior to and lost tight contests to their equals. If the Badgers had caught a few more breaks, 2012 could have resulted in a third-straight top-10 finish.

So Who Was Worse Than Their Record Showed?
The Buckeyes rang in the Urban Meyer era with an undefeated campaign. Unfortunately, they were ineligible for the conference crown and the postseason, so no banners will be hung. That could be poetic justice since the Buckeyes hardly had the makings of a powerhouse. The Buckeyes were solid on both sides of the ball, but this was hardly a juggernaut that rolled through the Big 10 leaving wolverine, lion, and badger carcasses in its wake. Fully half of their 12 wins came by a touchdown or less, including narrow escapes over luminaries like Cal, Indiana, and Purdue. Give the Buckeyes credit for their wins, but this team was not elite. More on that in just a bit.

Best Offense: Penn State 1.11
Bill O'Brien took over a reeling program and improved its offensive output from 345 yards per game in Big 10 play to 437 yards. No one will confuse the Penn State offense with the vintage Texas Tech teams of Mike Leach, but they were the best the Big 10 had to offer in 2012.

Worst Offense: Illinois -1.62
If you looked really closely on the Illinois sideline, it almost appeared as if Ron Zook was still coaching the team. The Illini averaged just 272 yards per game in league play and now are the proud owners of a 14-game conference losing streak.

Best Defense: Michigan State 1.12
Only a single Big 10 team gained more than 400 yards against the Spartan defense all season.

Putting the 2012 Buckeyes in Historical Perspective
Ohio State finished the 2012 season undefeated and ranked 3rd in the AP Poll. It marked their third undefeated regular season since 2002. However, thanks to shenanigans during the previous administration, the Buckeyes were ineligible for the postseason and were not given a shot to play for the national championship. Did they deserve one? How good were they? To attempt to answer those questions, I looked at every team from a BCS conference that finished with an undefeated record prior to their bowl game since 1998 (the beginning of the BCS era). Including Ohio State last season, 20 teams have accomplished this feat. To objectively rate those teams, I used the Simple Rating System at college football reference dot com. The SRS uses margin of victory and strength of schedule to calculate how many points above average a particular team is. For instance, last season, Ohio State finished with an SRS of 13.81, meaning they were about two touchdowns better than an average team. This ranked 13th nationally. The results for the 20 teams are summarized in the table below. 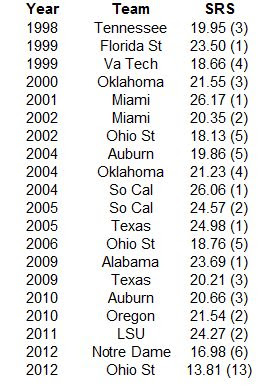 Last year's Buckeyes were clearly in a class all by themselves. No other undefeated team from a BCS conference had performed at such a low level. No team had finished with an SRS score outside the top-six. Only one other team had finished below 17 points above average, and that was last season's Notre Dame team that was waxed by Alabama in the BCS National Championship Game. Remember, Ohio State didn't have a bowl game against an elite team to drag down their rating. Ohio State was good last season, but they didn't belong in the national championship game. Any team that struggled to put away Cal and Purdue at home, and Indiana on the road was probably not worthy of gridiron immortality.
Posted by matt at 3:44 PM 4 comments: