We had another solid week, but one of our whiffs was really bad. I apologize for anyone who took my advice on Arizona. Email me your Social Security Number and I will reimburse you. As always, home teams in BOLD.
Last Week: 5-2
Overall 28-21 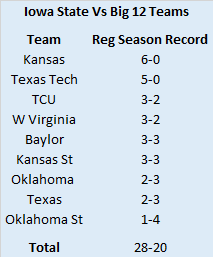 Their two lone failures as an underdog came against Clemson and Alabama when both were number one in games away from Hard Rock Stadium. I also looked at how Miami performed as a home underdog in general since joining the ACC. While this is the first time they have been a home underdog under Diaz, they are solid 9-4 ATS in that role since joining the ACC in 2004, including 7-6 straight up. I think Miami puts it all together this week and throws more chaos into the ACC race.
Posted by matt at 4:33 PM No comments:

We had our first losing week in a month. As usual, it was a combination of bad picks and a little bad luck. We'll try and do better this week. As always, home teams in BOLD.
Last Week: 3-4
Overall 23-19

We had our best week in a long time. Sure seems like a market correction is in store, but hopefully it waits a few weeks. As always, home teams in BOLD.
Last Week: 6-1
Overall 20-15

Tennessee -10.5 South Carolina
Am I putting too much stock into Tennessee's win against Missouri last week? Probably. The Vols rolled up nearly 700 yards and 62 points against what may end up being one of the worst SEC defenses we have ever seen. However, given that dominating performance, I expected this spread to be over two touchdowns. Despite dropping 62 points on the road in a conference game, I believe Tennessee is still undervalued by the betting market. The Vols have lost to the two best teams they have played but it may be time to reevaluate that loss to Pittsburgh. A month ago, Pittsburgh looked to be a middling Power Five team, but according to FPI, they are the second best team in the ACC (tenth best in the country) and the favorite to win the conference. Are you prepared to live in a world where Pittsburgh is an 11-2 ACC champion with a loss to Western Michigan that prevents them from making the playoff? I sure am. Anyway, that competitive loss to the Panthers suddenly looks better and better, and while I don't expect Tennessee to have any shot at beating Alabama or Georgia, they can certainly handle an SEC team with a deficient offense led by a rookie head coach. How many points can South Carolina realistically expect to score in this game? Ignoring their game against Eastern Illinois, the Gamecocks have scored 66 points in their four FBS games. Georgia and Kentucky have elite and good defenses respectively, but the Gamecocks also scored twenty points against East Carolina and 23 against Troy. Seems like they probably max out in the mid-twenties. Tennessee has a pretty good offense, not up to the standards in Tuscaloosa, but pretty good. And they are able to maximize that offense by playing at a fast pace. This game should have more possessions than an average college football game, so Tennessee will have extra opportunities to get margin. To handicap this game, I also looked at how Josh Heupel's teams performed in home games while he was at Central Florida. His teams were a mediocre 8-7 ATS as home favorites, but that was more a function of them laying a lot of points. Here is the chronological margin of victory in home games against FBS competition for his teams at Central Florida. 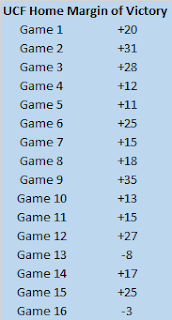 The loss by eight points came against Tulsa when the Knights blew a big lead and the three point loss was to unbeaten Cincinnati. His teams won their other 14 home games by at least eleven points. As I mentioned earlier, they did not cover a lot of those games because they were laying three and four touchdowns. I will probably regret this around 12:30 or so Saturday, but you have to lay it with Tennessee.
Syracuse +6 Wake Forest
Wake Forest has pretty much nailed its last two football coaching hires (wish I could say the same about basketball). The Demon Deacons have enjoyed an unprecedented run of success the past twenty years, playing in ten bowl games, entering the AP Poll in six different seasons, and even winning the conference in 2006. Despite all that success, you would almost (I said almost) have been better off investing in Enron in 2001 than backing Wake Forest as a road favorite.

I don't expect those numbers to improve much after Saturday. Wake Forest is 5-0, but their schedule has been rather light in the early going. Their best victory is either the road domination of Virginia or the close scrape with Louisville last week. Syracuse is not a great team, but they are much better than the smoldering crater they were last season. They have been pretty strong on defense, holding two Power Five opponents and Liberty to 314 yards per game and 4.69 yards per play. Despite being coached by Dino Babers, the passing game is pedestrian, but the Orange are able to run the ball with running back Sean Tucker averaging nearly six yards per carry and quarterback Garrett Shrader (a Mississippi State transfer) contributing 234 yards on the ground. Wake Forest has a great chance to start 8-0 if they can get by the Orange, but they will struggle to put Syracuse away in the Carrier Dome.
Wyoming +6 Air Force
People tend to remember the last thing they saw. Erudite folks call that recency bias. And that is probably why Air Force is laying more than a field goal against the Cowboys. In Wyoming's last game, they had to survive a two point conversion to avoid going to overtime against Connecticut. The Cowboys trailed for most of the game before staging a second half rally to take the lead and ultimately prevail. While barely beating Connecticut is never something you should brag about, I will point out the Huskies have played much better since Randy Edsall retired. After taking Wyoming to the wire, they nearly won on the road against an SEC opponent, so Wyoming's result is not quite as bad as it would initially appear. Compare their performance to Air Force which has rolled its past two opponents by a combined 52 points. Keep the competition in mind though. Their first victim was a team from Florida playing in altitude (or at elevation, I forget which is the proper phrasing) and the other came against perhaps the worst team in the Mountain West. Give the Falcons credit for blasting those two teams, but Wyoming represents their stiffest test to date. The Falcons have rolled up over 1200 yards on the ground in their past three games, so the big question will be how well Wyoming plays against their triple-option variant offense. Their history under Craig Bohl suggests the defense will play well. 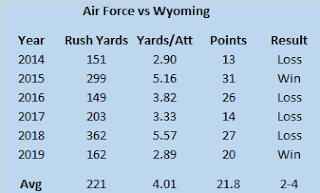 Two winning weeks in a row. Let's see if we can make it three and start October strong. As always, home teams in BOLD.
Last Week: 4-3
Overall 14-14

Finally, a winner. Or five winners as it were. We had our first winning week of the season and will look to make it two in a row. As always, home teams in BOLD.
Last Week: 5-2
Overall 10-11

Boston College +2 Missouri
I am a little reticent to back Boston College for three reasons.
Despite those misgivings, I think you still have to give the benefit of the doubt to the Eagles at home. While quarterback Dennis Grosel is a downgrade from Jurkovec, he has experience. He saw significant action in 2019, leading the team in pass attempts, and started the season finale last season. While he has his limitations, this is not a freshman being thrown to the wolves. In addition, Grosel may not need to throw the ball too much. Take a look at Missouri's horrid rush defense. The Tigers allowed 174 on the ground in their opener against Central Michigan and then were shredded by Kentucky for 341 yards. But the coup de grace was last week when a directional Missouri school rolled up nearly 300 yards at more than eight yards per rush! Grosel can do some damage with his legs and as a team, the Eagles are averaging over 200 rushing yards per game and over five yards per carry against their soft schedule. Finally, what puts Boston College over the top for me is Missouri's poor road record following the departure of Gary Pinkel. In four seasons under Barry Odom and a year plus of Eli Drinkwitz, the Tigers are 8-18 in true road games and the eight scalps they have collected are not that impressive. 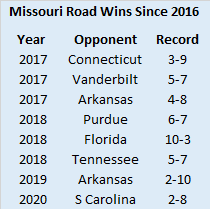 The victory at Florida in 2018 was legitimately impressive, but there is not a lot of beef in those other wins. Some highlights include the Tigers closing out both the Bret Bielema and Chad Morris (he was already fired, but you get the idea) eras at Arkansas and beating South Carolina in their first game under interim coach Mike Bobo. Boston College has a pulse, so I think even with a back up quarterback, they can do enough on the ground to win this game outright.
Texas Tech +8 Texas
Elite quarterback play is something Texas Tech has been missing since Patrick Mahomes left Lubbock following the 2016 season. That may have changed with the arrival of Oregon transfer Tyler Shough. Its quite early, and the schedule has not been formidable, but Shough has posted impressive numbers. If he can continue to post quality passing numbers in Big 12 play, the Red Raiders could be a dark horse contender in the conference, especially considering they put up surprisingly good per play defensive numbers last season. I'm buying the early season improvement for Texas Tech, but more importantly, I'm selling Texas. Since playing for the national title following the 2009 season, Texas has been one of the worst home favorites you could possibly back. In Big 12 play, under three different head coaches, the Longhorns are 11-21 ATS as a home favorite with eleven outright losses.