One of the forgotten greats teams of the 21st century is the 2001 Florida Gators. While the Gators didn't even win their division, much less the SEC, I believe they were the only team from that season that could have given Miami a run for their money. I have YPP data going back to 2005, but thanks to the wonderful folks at College Football Reference, it took me less than an hour to calculate it for the 2001 SEC. With that season now twenty years in the rearview, I thought now would be a great time to take a look back at arguably the best (college) football team Steve Spurrier ever put on the field.
First, here are the obligatory SEC standings. 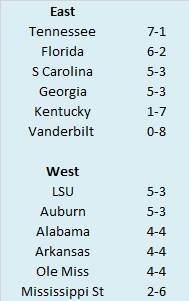 As I mentioned in the introduction, Florida didn't even win their division in 2001. The Gators lost at home to Tennessee in a game that was rescheduled due to the 9/11 terrorist attacks. The loss put the Volunteers into the SEC Championship Game where they lost to an LSU team they had beaten earlier in the season. LSU's victory gave a long forgotten coach named Nick Saban his first SEC title and marked the last time the SEC champion finished the season with three conference losses.
And here are the Yards Per Play (YPP), Yards Per Play Allowed (YPA), and Net Yards Per Play (Net) numbers for each SEC team. This includes conference play only with the championship game not included. The teams are sorted by division by Net YPP with conference rank in parentheses. 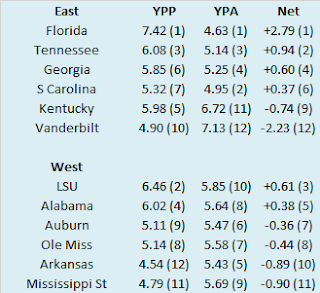 Based on the YPP numbers, Florida was head and shoulders above the rest of the SEC in 2001. The Gators averaged over seven yards per play on offense and were nearly a full yard per play ahead of the second most prolific offense (LSU). The Gators also boasted the conference's top defense and their Net rating of +2.79 was nearly a full two yards per play better than Tennessee.
This is where I usually post a table showing which teams over or underperformed relative to their expected record based on YPP, but instead of pointing out some close game records, I wanted to try and put the Florida offense into some historical context. How do those per play numbers compare to all SEC offenses this century? Eleven SEC teams have averaged at least seven yards per play over the course of a conference season since 2000. Seven have occurred in the past four seasons and the other ten outside of the 2001 Gators have all happened since 2010. In other words, before 2018, this Florida offense was the best on a per play basis this century and likely in SEC history. Here are all eleven sorted from highest to lowest. 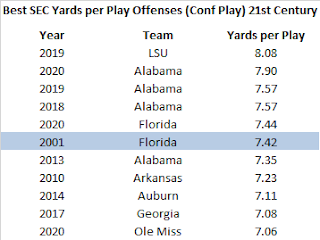 Florida also did a pretty good job of turning all those yards into points. The Gators scored 41 offensive touchdowns in SEC play making them just the eighth SEC team this century to average at least five offensive touchdowns per game in league play. And six of the other seven instances have come in the past three seasons. Here are all eight sorted from highest to lowest. 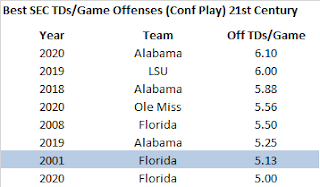 If you just went by the yards and points, you may have confused the SEC for the Big 12 in 2020. Three offenses averaged at least five offensive touchdowns per game and over seven yards per play! But back to Florida. That the 2001 Gators still rank as one of the SEC's best offenses twenty years later considering the modern offensive environment is amazing. Steve Spurrier really was ahead of his time, especially considering this offense took the field the same year that men like the atavistic Lou Holtz and Houston Nutt were coaching SEC programs.
So how did this Florida team manage a silver medal in the SEC East? The offense was great, but it had a bit of a turnover problem. Florida turned the ball over twenty times in eight conference games, including five in an upset loss against an Auburn team that lost five games (more on that later). My abacus tells me that is exactly 2.5 turnovers per game. Compared to the other great per play offenses, the Gators were the worst at turning the ball over. 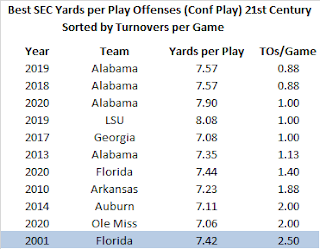 This table illustrates how efficient offenses have become. Eventual national champions LSU in 2019 and Alabama in 2020 combined to average nearly eight yards per play and turn the ball over just once per game! In fact, no other offense that broke the seven yards per play barrier averaged more than two turnovers per game.
Going back to that Auburn game, that loss, not the home loss to Tennessee, and by extension, all those turnovers, may have been what cost Florida a shot at the national title. Let's consider an alternate 2001 campaign where the Gators don't play their best, but manage to edge Auburn in mid-October instead of losing to them. Since they were ranked first in the AP Poll at the time of the game, they are likely still number one heading into their rescheduled game against Tennessee. The Gators drop that game to the Volunteers and in the process, Tennessee still wins the division and advances to the SEC Championship Game. However, late in the 2001 regular season, the best thing you could do was not play. Unbeaten Nebraska dropped their regular season finale to Colorado and the Buffaloes advanced to the Big 12 Championship Game. In that game, they avenged an earlier regular season loss to Texas and eliminated the Longhorns from BCS title game contention. Similarly, LSU's upset of Tennessee in the SEC Championship Game gave the Volunteers their second loss and eliminated them from BCS title contention. When the Championship Week smoke cleared, Miami was a clear cut number one in the final BCS standings and their were three contenders to face them in the Rose Bowl: Nebraska, Colorado, and Oregon. Despite a head to head loss to Colorado, Nebraska edged the Buffaloes by five one hundredths of a point to finish second in the BCS standings. For what its worth, despite owning the aforementioned loss to Auburn, Florida still finished fifth in the final BCS standings.

Take away the turnover fueled loss to Auburn, and I think Florida is the non-champion that is able to back their way into the Rose Bowl. While the 'it just means more' SEC narrative did not exist in 2001, the Gators regular season dominance probably would have propelled them to their first ever Rose Bowl.
Before we close the book on the 2001 Gators, I thought I would point out the relative dearth of NFL stars on such a dominant college football team. The 2001 team produced an impressive 22 players who spent time on NFL rosters, but Lito Sheppard was the only one to ever make a Pro Bowl. And the best pro from the offensive side of the ball? That's either Rex Grossman or Jabar Gaffney. The fact that these players didn't pan out as pros shouldn't take away from their accomplishments in college, but it is surprising such an explosive college offense (especially in the SEC) didn't produce a single Pro Bowl offensive player.
Posted by matt at 9:36 AM No comments:

Last week we looked at how Sun Belt teams fared in terms of yards per play. This week, we turn our attention to how the season played out in terms of the Adjusted Pythagorean Record, or APR. For an in-depth look at APR, click here. If you didn’t feel like clicking, here is the Reader’s Digest version. APR looks at how well a team scores and prevents touchdowns. Non-offensive touchdowns, field goals, extra points, and safeties are excluded. The ratio of offensive touchdowns to touchdowns allowed is converted into a winning percentage. Pretty simple actually.

Once again, here are the 2020 Sun Belt standings. 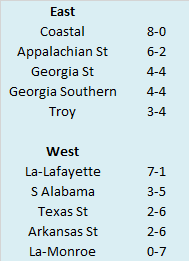 And here are the APR standings with conference rank in offensive touchdowns, touchdowns allowed, and APR in parentheses. This includes conference games only with the championship game excluded. Since teams played a varied number of games (the only scheduled conference game that was not played was between Louisiana-Monroe and Troy), the rankings are on a per game basis, not raw totals. 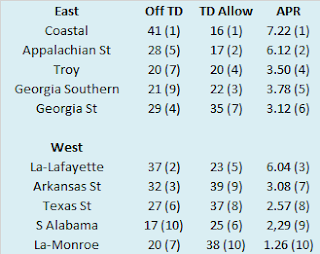 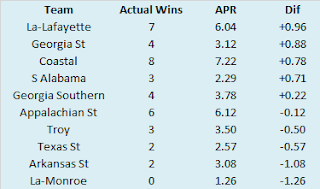 I use a game and a half as an arbitrary line of demarcation to determine if a team significantly over or under-performed relative to their APR. By that standard, no team saw their record differ significantly from their APR.
East Vs West
The Sun Belt is new to divisional play, having split into separate divisions in 2018. In that short time frame, the East has dominated the West, going 39-20 in interdivision play. The East was especially dominant in 2020, posting a 15-4 record against West division opponents, with Louisiana-Lafayette accounting for three of the West's quartet of victories. 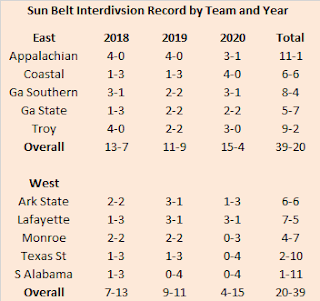 While the East won nearly 80% of interdivision games in 2020, that doesn't do justice to the extent they dominated their rivals in the West. Their four losses all came by a touchdown or less and their total margin of defeat in those four games was just fifteen points. If we look at per game scoring margin, East teams beat West teams by nearly two touchdowns per game on average!

While we missed out on a Sun Belt Championship Game in 2020, the East is 2-0 in the game's brief history. In that span, Louisiana-Lafayette has won the West each season. Perhaps not surprisingly, they are the only West division team with a winning record against the East in that span. If the West is to make up any ground in this nonexistent challenge, the other four teams in the division must start pulling their weight.
That concludes our ten conference, twenty post slog through the beginning of the offseason. We are a little more than twelve weeks from some hot Week Zero action. Between now and then, posts will be more sporadic (think every two or three weeks instead of every week), but look for some First Half Point Differential posts on the 2020 college football season as well as a few YPP and APR throwbacks. As always, thanks for reading and enjoy your summer.
Posted by matt at 3:08 AM No comments: