Steady as She Goes: Addendum 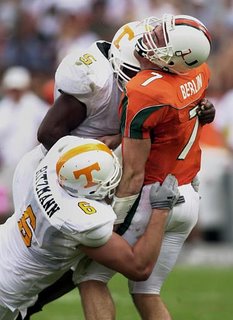 Last week, I posted a small regression analysis of year to year correlation of points scored versus points allowed. In the past week, I have been conducting similar analyses for previous seasons. Here are the results:

If I had stopped after the second regression analysis, I would have concluded that offensive and defensive correlation from year to year was essentially random. However, after looking at 5 seasons worth of data, I am inclined to believe that year to year correlations between defense are more consistent that year to year correlations between offense. The correlation coefficient for defense was higher than offense for 3 of the 5 seasons, lower for only 1 season, and almost equal for another. Furthermore, the range for the correlation coefficient for defense was much smaller (.1224) than the same range for offense (.2325). Thus I believe the conslusion I reached last week remains correct (somewhat). Your thoughts?

You lost me with all the phylosophical mumbo jumbo, but the pics were nice.