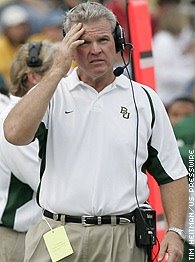 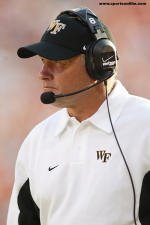 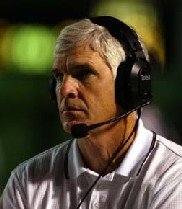 Baylor, Vanderbilt, and Wake Forest have a lot in common on the gridiron. They are all private schools in big time conferences. They are all located in the southern part of the United States. They all have very little history of success in football. And most importantly, they each have a quality head coach in various stages of rebuilding and reinvigorating their once struggling programs. While Wake Forest, and by extension Jim Grobe, has gotten most of the exposure (and rightfully so) thanks to their 8-1 start, don't sleep on Guy Morriss at Baylor and Bobby Johnson at Vanderbilt. I decided to see how the fortunes of each program has changed since the new men arrived on the scene. Grobe is currently in his 6th season at Wake, Johnson in his 5th at Vandym and Morriss in his 4th at Baylor. This post will compare each coaches' record at his respective school in several areas against the school's same record in those areas in the coaches' preceding years. Since Grobe is in his sixth season at Wake, his record will be compared to the previous six seasons before his arrival. In the same vein we'll look at the previous 5 before Johnson's arrival at Vandy and the previous four at Baylor for Guy Morriss. First up, Jim Grobe.

Grobe's resume is very impressive. The one stat that really jumps out at me is the blowout losses. In his nearly 6 seasons at the helm, the Demon Deacons have suffered only 6 losses by 20 or more points. In Jim Caldwell's final season (2000), the Deacons suffered 5 such defeats.

The Commodores' improvement hasn't been as dramatic, but anyone who has watched a Vandy game the past two seasons knows they are much more competitive. Johnson already has 50% more conference victories, and he still has two more chances to get win number 7 this year. The blowout losses are also down and who can forget the dramatic victory over Tennessee last season for the first time since what seems like Reconstruction. The 'Dores haven't made it to a bowl game yet, but they'll get to one either in 2007 or 2008. Look out for exciting sophomore quarterback Chris Nickson, who has been quietly improving since opening the season in the Big House.

In conference play, Morris has certainly been the miracle worker. The Bears have won twice as many road conference games (2) in Morris' tenure as total conference games in the four seasons before his arrial. Those two road wins are also the only two road victories in the Bears' nearly 11 seasons in the Big XII. This season, the Bears implemented a new Texas Tech-lite offense and after some early struggles (21.2 points per in the first five games) the Bears offense has come of age (28.6 points per in the last five). The Bears also have the pieces to be a bowl team in the near future if they catch a few breaks.

For schools like Wake, Vandy, and Baylor, there is a such thing as a moral victory. As a Wake fan, even when we were busy going 4-7 the past two seasons, it was still better than being slaughtered in half our games as was often the case in the mid 1990's. Consistently winning 8-9 games is not the goal, nor should it be at these schools. The goal should be playing competitive football (as all three schools have been) and every few seasons being in position to go to a bowl game and possibly more, as is the case for Wake Forest this season.
Posted by matt at 7:39 PM

Great comparisons at three really good schools who have struggled to be competitive in football. One thing not mentioned is Wake has highest graduation rate in Div-1.
But with all due respect, SEC is much tougher on "have nots" than ACC and Big 12.
I love Grobe and the other two as well.

What do you think about Riley Skinner?

I'm a fan of Skinner. As is usually the case, the quarterback gets the bulk of the credit when the team wins, and the bulk of the blame when they lose. Still, I think Skinner has performed quite well in limiting his turnovers and for lack of a better term, 'managing' the game. However, I think much of Wake's success this season is due to a good deal of good luck. I think this team is about on par with the 2004 incarnation. But consider this: that 2004 team went an unbelievable 2-6 in close games. A few breaks here or there and that team wins 7 or 8 games. This year's squad is 4-0. A few bad bounces and we could be 5-4 and struggling to make a bowl game.