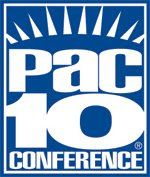 One way to look at team strength, taken from Eddie Epstein’s fantastic book Dominance, is to look at teams points scored and allowed relative to the league average and standard deviation. The more standard deviations they are from the mean, the better (or worse they are). For those unfamiliar with what standard deviation is here’s the wikipedia link. In the coming weeks, I will be looking at each Division IA conference and ranking each team in regards to their Standard Deviation Power Index in conference play. Keep in mind, the SDPI does not adjust for schedule strength for conferences such as the ACC where each team does not play each other and it ignores special teams which can play a significant role in both points scored and points allowed.

First here's the link to the 2006 Pac 10 Standings to refresh your memory.

Now here are the 2006 SDPI Standings:

Best Offense: Cal 1.36
Jeff Tedford's Golden Bears were the most potent offense in the Pa 10.

Worst Offense: Stanford -2.22
Despite the presence of pro prospect Trent Edwards for half the season, the Cardinal could not put together a consistent offensive attack. They were held to single digits in 5 of their 7 conference games.

Best Defense: Southern Cal 1.60
The defense kept the Trojans on top of the Pac 10 while their new skill position players honed their craft.

Worst Defense: Stanford -1.63
The Cardinal double dip in both categories. Only held one team (Washington) below 20 points.

Best Team that Didn't Go to a Bowl: Arizona -0.08
The Wildcats were roughly the 6th best team in the conference and actually finished bowl eligible.

Worst Team that Went to a Bowl: Arizona State -0.77
As was normally the case under Dirk Koetter, the Sun Devils failed to live up to preseason expectations. They were much closer to Washington in terms of performance than Washington State.

Schedule Strength: No need to rank schedule strength since everybody plays everybody in the 9-team league.

Team(s) Likely to Decline: Oregon State
The Beavers lose their senior quarterback, Matt Moore, and should also see some regression in the luck department. They were 3-1 in close conference games, 5-1 overall. Hard to come up with any other teams that look like solid bets to decline, although some certainly will. Every other Pac 10 team has their fair share of positive and negative indicators. The Beavers are the only team where the negatives significantly outweigh the positives.

Team(s) Likely to Improve: Washington State and Arizona
Improvement is a must for these two squads if their respective coaches want to breathe easier. Washington State, which finished 8th in the SDPI rankings, was just as close to fourth place as they were to 9th. They return their starting quarterback, so with a little bit of luck, they should improve on their 4-5 conference record in 2006. Mike Stoops should finally have the Wildcats in a bowl game in his fourth year in the desert. The Wildcats return their starting quarterback, prize recruit Willie Tuitama, who must improve on his disappointing 2006 campaign. The Pac 10 is probably the hardest conference to project going forward because the middle seven teams were all bunched so close together. From each according to his ability, to each according to his needs.
Posted by matt at 3:37 PM