One of my favorite set of posts from last offseason was the conference recap using SDPI. SDPI is a statistic I borrowed from Eddie Epstein that he used in his book, Dominance, to rank pro football's all-time greatest teams. SDPI stands for Standard Deviation Power Index and looks at how teams performed relative to the league average (or conference average in this case) and standard deviation in terms of points scored and allowed. The more standard deviations a team is above the mean, the better they are, and vice-versa. Here is the link to last year's Big 10 post. As you can see, SDPI was a useful tool in predicting some of the rise and fall among the Big 10's teams. In the interest of providing an even better offseason analysis, I will now be conducting another SDPI, this time for yardage. It is calculated in the same manner as the SDPI for points, but will obviously be measured against the conference mean and standard deviation for yards. Think of it this way: Points are the end result and yards are the means to that end. Thus, looking at both sets of data, we can get an even better idea about which teams are likely to improve or regress in 2008. 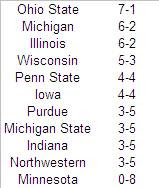 Two teams stand out when looking at the SDPI rankings versus the actual standings. Iowa, which finished tied for 5th with Penn State with a 4-4 conference record, actually rates as the worst team in the Big 10 in terms of yardage (even worse than winless Minnesota!) and second to last if we look at points scored and allowed. We'll get to the Hawkeyes offensive futility in a bit, but for now we'll try to answer the question of how Iowa was able to win 4 conference games, while Minnesota was not able to bag a single victory. For starters, whether it be clutch play or blind chance, Iowa won close games. They were involved in 4 one-score games in Big 10 play. They won 3 of them (one of which was against Minnesota). The Gophers on the other hand, were involved in 3 one-score games in Big 10 play, and lost all 3. Iowa was also very fortunate in regards to turnover margin in Big 10 play. They gained 9 more turnovers than they lost in conference play (best in the Big 10), while Minnesota had a margin of -6 (second to last). Finally, for all their offensive struggles, Iowa was much stronger than Minnesota defensively. The Gophers allowed the most yards in conference play, and the second most points, while Iowa was 5th in both yards allowed and points allowed. Preliminary research has shown that defense has a bigger impact in a team's won/loss record than offense. The second team that stands out is Michigan State. The Spartans finished tied for 7th in the Big 10 with Indiana, Purdue, and Northwestern, but were statistically the second best team in the conference. All 5 of the Spartans' conference losses, and their loss in the bowl game to Boston College, were by 7 points or fewer. With a few breaks, they could have very easily been the conferences' sacrificial lamb in Pasadena.

Best Offense: Michigan State 1.96 (SDPIP) and 1.34 (SDPIY)
The Spartans gained the most yards and scored the most points in Big 10 play. They were shutdown against Ohio State, gaining only 185 yards, but they amassed over 400 yards in 6 of 8 conference games.

Best Defense: Ohio State 1.65 (SDPIP) and 2.21 (SDPIY)
The Buckeyes nearly lapped the field in both categories. The second best defense by both metrics (Michigan) allowed about 85 more yards per game and 5.6 more points per game than Tressel's Troops.

Hardest Schedule (based on cumulative SDPI of opponents): Penn State 3.50 (SDPIP), Michigan 3.73 (SDPIY)
This is really splitting hairs. While both played one of the bottom two teams in the conference (Penn State played Iowa and Michigan played Minnesota), they also played nearly every team in the top half of the league (Illinois, Wisconsin, Michigan State, Ohio State and each other).

Easiest Schedule: Indiana -2.82 (SDPIP), Illinois -1.78 (SDPIY)
Indiana played both Iowa and Minnesota while avoiding Ohio State. Illinois did play the wheat of the conference (Ohio State, Wisconsin, Penn State, and Michigan), but they also drew a sizeable portion of the chaff (Iowa, Minnesota, Northwestern, and Indiana).

Ohio State
Some team may rise up and shock us all, but heading into next season the smart money is on the Buckeyes. Look who's coming back. Quarterback. Check. Running back. Check. Starting receivers and tight ends. Check. Majority of offensive linemen. Check. 9 of the top 10 tacklers from a fantastic defense. Check. Plus look at the teams that finshed closest to them in the standings. Illinois loses a game-changing running back, and were a bit fortunate to finish where they did in the standings in the first place. Michigan loses their starting quarterback and running back and must learn new schemes on offense. Wisconsin and Penn State both lose their starting quarterbacks. And the team closest to them in terms of SDPI? The Spartans do bring back some very good offensive talent, but they lose 6 of their top 10 tacklers. Plus the Buckeyes get Penn State and Michigan in Columbus. They do have to go on the road to take on the Illini, Spartans, and Badgers, but even if they drop 2 of those, they can still take home the league title.

Michigan State, Minnesota, and Northwestern
As discussed, probably ad nauseum earlier, the Spartans were extremely unlucky in 2007, and yet still finished bowl eligible. Despite starting a relatively inexperienced junior quarterback, and breaking in a new head coach, the Spartans had the best offense in the Big 10. In 2008, the quarterback (Brian Hoyer), starting running back (Javon Ringer), and leading receiver (Devin Thomas) all return. The Spartans do lose Ringer's backfield mate and second leading rusher, Jehuu Caulcrick, as well as star tight end Kellen Davis, but the pieces are in place to have another top notch offense. The defense does lose 6 of its top 10 tacklers, including both defensive ends, Jonal Saint-Dic and Ervin Baldwin (combined 18.5 sacks), but even if the Spartans don't improve at all performance-wise, some progression to the mean in the luck department will equate to a better record. And if everything goes right, well Michigan State could win the conference title. Picking Minnesota to improve is a lot like picking the sun to rise. It's hard to get any worse than 0-8 in the conference. With their relatively soft non-conference schedule (Northern Illinois, Montana State, and Florida Atlantic come to the Metrodome, while the Gophers travel to Bowling Green), they have a real shot at being 4-0 before conference play starts. Thus, two wins would get them to bowl-eligibility. The Gophers have 3 very winnable home games against Iowa, Northwestern, and Indiana in conference play, so don't discount the chances of a bowl invite following a one-win season. The Gophers also have a few positive trends. They were second to last in the Big 10 in turnover margin (-6) and quarterback Adam Weber will be in his second season as a starter. Weber played reasonably well for a freshman throwing 24 TDs and 19 interceptions, while running for over 600 yards. But the Gophers success or failure next season will be based on their performance on the other side of the ball. The defense must improve on the nearly 500 yards and 38 points per game they allowed in conference play. Finally, we have the Northwestern Wildcats. Year 3 of the Pat Fitzgerald era should end with a bowl invite. The Wildcats did finish 3-0 in one-score conferece games in 2007, but they also finished last in the conference with a turnover margin of -12 in Big 10 play. Quarterback CJ Bacher and running back Tyrell Sutton both return for their senior campaigns. 3 of their top 4 receivers are also back. The defense does lose 3 of its top 4 tacklers, but also brings back 8 of its top 11. Still, the Wildcats turnover margin cannot be as bad as it was in 2007 and with Duke, Syracuse, Ohio, and Southern Illinois on the non-conference schedule, a good start is almost a given.

Iowa and Indiana
I will say this for the Hawkeyes, despite their offensive ineptitude, they at least managed to not further soil their season by limiting their turnovers. In 8 conference games, they turned the ball over only 7 times (best in the Big 10). The main issue for the Hawkeyes was their inability to protect quarterback Jake Christensen. Including non-conference games against Northern Illinois, Syracuse, Iowa State, and Western Michigan, the offensive line allowed 46 sacks (115th in the nation in sacks allowed per game). All 5 starters do return and Christensen is back under center, but running backs Albert Young and Damian Sims are gone. And the offense simply has a long way to go to even be 'bad'. The Hawkeyes will certainly not be as fortunate in the turnover department, so don't expect them to win more than 3 conference games. After an unexpected bowl bid, the Hoosiers appear to be on the rise. Not so fast. Despite the presence of Kellen Lewis under center and the 6-7 James Hardy boxing out defenders down field, the Hoosiers still finished 9th in the Big 10 in yards per game. The offense showed flashes, but altogether was not good. Now Hardy is gone a year early to the NFL and Lewis will be forced to shoulder more of the load. As for the defense? It's been terrible for sometime. The Hoosiers did sack opposing quarterbacks 42 times (6th in the nation in sacks per game), but only two teams (Northwestern and Minnesota) allowed more yards in Big 10 play. Now the best defenders in the back 7, Tracy Porter and Leslie Majors, are gone. If the Hoosiers improve defensively, it won't be by much. The scedule is bereft of both Michigan and Ohio State, and the 4 non-conference games are all home contests against mid-major teams (Ball State, Central Michigan, Murray State, and Western Kentucky), but don't look for a second consecutive bowl bid for the Hoosiers.
Posted by matt at 9:15 PM