Sam the Man or Sam the Sham? 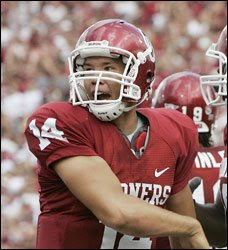 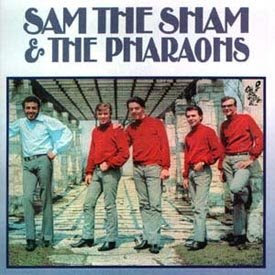 Know who led the nation in pass efficiency last year? Tim Tebow. Colt Brennan. Graham Harrell. Dennis Dixon. Matt Ryan. Nope. It was freshman Sam Bradford of Oklahoma. Freshman. Sam. Bradford. Slingin' Sam paced the nation with a quarterback rating of 176.5. Heading into his sophomore season, he may be the most important player in the Big 12 and perhaps in the nation. If he continues his stellar play, Oklahoma is not only the favorite to win the Big 12, but also stands a real chance at winning a MNC. How likely is it that Bradford continues to play at such a high level? Glad you asked.

Since 2002, 26 quarterbacks have posted a pass efficiency rating of at least 150 and returned to play the following season. They posted the following cumulative stat line in their 'big' season:

In the year following their 'big' year, those quarterbacks posted this cumulative stat line:

As you can see, those quarterbacks who returned regressed on average in every statistical category. Per 100 attempts, they completed about 2 fewer passes, threw about one less touchdown, and about 1/2 of 1 more interception. They also averaged about 3/4 of a yard less per pass attempt. Separately, those changes are not dramatic, but together they account for about an 8% drop (12.6 points) in quarterback rating. Of course, collectively, these 26 quarterbacks still had pretty good seasons. They simply were not as stellar as they had been.

Does this mean Bradford is doomed to regress? Of course not. Colt Brennan went from merely very good in 2005 (quarterback rating of 155.5) to otherworldly in 2006 (quarterback rating of 186). Bradford does not have as much room for improvement, but its not inconceivable for him to improve slightly. Still, the odds are stacked against him. Of those 26 quarterbacks, 21 had a worse quarterback rating in the year after their 'big' year. That's a pretty high recidivism rate (81%). Last year Bradford's efficiency helped the Sooners score the 6th most points in Big 12 play despite their 9th place finish in yards. If he's not as efficient this season, those points will be harder to come by and the Longhorns or Red Raiders could pass the Sooners in the standings.
Posted by matt at 5:55 PM

Is there any way we could get the age of those 26 quarterbacks and what percent of them were freshmen or sophomores and maybe focus more on that group.

Ask and you shall receive.