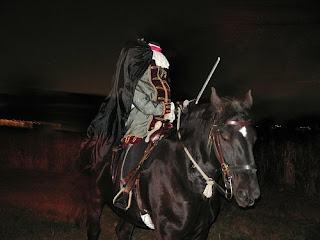 If it wasn't already apparent, it is now. Mike Leach is one helluva a football coach. He has taken a non-traditional power in Texas Tech and led them to a #2 ranking in the polls. Leach has been to a bowl each season at Tech in a tough conference and even tougher division. Will Leach stay at a Red Raider at season's end? I don't think there is any question Leach will win wherever he goes, but if he stays at Tech and continues to win, and occasionally compete for a league title, he could go down as one of the all-time greats. That being said, I fully expect Texas Tech to lose at least once and possibly twice before the end of the regular season.

Someone is going to have to explain the logic in the Coaches Poll. While Texas is ranked one spot ahead of Oklahoma in the AP Poll (4 and 5), the Sooners are ranked 4th in the Coaches Poll and the Longhorns are 7th. Now, Texas did lose most recently, but it was on the road and the winning margin came in the closing seconds. Texas beat Oklahoma on a neutral field by 2 scores (10 points), and besides the win over the Sooners, owns 2 wins better than any on the Sooners slate (Missouri and Oklahoma State) with the possible exception of TCU.

Another team in Texas is defying expectations with a prolific offense. With their victory over UTEP on Saturday, Rice is now bowl eligible at 6-3. Each loss has come to a likely bowl team--Texas, Vanderbilt, and Tulsa, and while Rice has yet to knock off a team with a winning record, a 2nd potential bowl bid in 3 seasons is something to get excited about. In fact this team is much better than the rabbits foot carrying 2--6 version. The 2006 team was outscored by 82 points over 13 games, while this year's version is +34 thus far. Rice has 2 receivers closing in on the 1000-yard mark, touchdown machine Jarett Dillard and uber-mench James Casey. With games left against Army, Marshall, and Houston, Rice could potentially win 8 games before their bowl.

Finally, there is a real imbalance in the divisions within the Big 12 and MAC this season. The Big 12 South is 13-3 against the North thus far. The 4 superpowers (Oklahoma, Oklahoma State, Texas, and Texas Tech) have yet to lose a game outside the division. The MAC West is currently 11-1 against the MAC East with the only loss coming when Eastern Michigan fell to Akron. From the looks of things, the conference championship games may not be too competitive.
Posted by matt at 6:03 PM