In addition to the SDPI posts, another offseason interest of mine has been to look at how each IA conference has shaken out since 2005. I chose 2005 as the starting point because that was the year the ACC expanded to 12 teams, the Big East added 3 new members and booted Temple, Conference USA added a championship game, the Mountain West added TCU, the WAC looted the Sun Belt after several of its members joined Conference USA, and the Sun Belt added 2 independents from Florida (FAU and FIU). Since 2005, there has only been one change in any IA conference. That was the expansion of the MAC by a single team with the addition of Temple. And one final note, each of the statistics posted here are for conference games only (championship games excluded). Since each school plays a vastly different non-conference schedule, this offers a better standard of comparison. So far we've looked at all the BCS conferences, so now its time to give the little guys some love. We'll begin with a look at Conference USA. Here are the cummlative Conference USA standings since 2005. 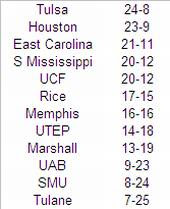 Not a surprise who the top team is. Tulsa has played in three of the four Conference USA Championship Games (winning one). The top five teams have accounted for all eight spots in the title game (Tulsa-3, UCF-2, and one apiece for Houston, East Carolina, and Southern Miss). Amazingly, despite the fact that they have lost 17 straight conference games, SMU does not have the worst record in conference play since 2005. That honor belongs to the Green Wave of Tulane, who along with UAB, are the only teams to not finish at least .500 in conference play at least once. When reviewing the standings from the past four seasons, I noticed a trio of teams that appeared to be constantly going from contender to also ran in each successive season. In 2005, Memphis finished 5-3 in conference play, tied for second in the East with Southern Miss, and a full two games behind division champ UCF. The next season, the Tigers hit rock bottom, winning only a single conference game. In 2007, they were back near the top again, finishing 6-2 and just a game back of division champ UCF. In 2008, the Tigers again fell back, although this time not as far, with four league wins. Similarly, their division brethren at UCF have been remarkably inconsistent as well. The Knights won the division with a 7-1 record in 2005, before losing to Tulsa in the title game. In 2006, the Knights slumped to 3-5. They rebounded to again win the division with a 7-1 record in 2007, and this time defeated Tulsa to claim the conference crown. In 2008, they again regressed to 3-5, which was tied for last place in the division. Out west, Rice continued their run of irrelevance with a 1-7 mark in 2005 under coach Ken Hatfield. Todd Graham took over in 2006, and Rice rode a great record in close games to a 6-2 record and second place finish. The Owls slipped in 2007 with a 3-5 conference record. This past season, they rode their offensive triplets to a 7-1 conference record, which tied them with Tulsa for the division title. The table below illustrates visually what I likely failed to convey with my words. 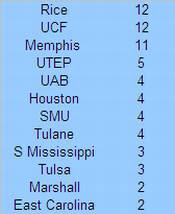 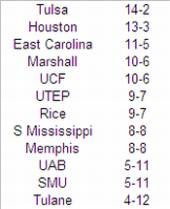 As has been the case in most of these reviews, the team with the best overall record also has the best home record. Tulsa has been bested only twice at home by conference foes. Houston knocked them off in 2005 and Rice upset them in overtime in 2006. Of course, these numbers don't include the postseason, where East Carolina upset the Golden Hurricane in the Conference USA Championship Game this past season. The biggest disparity between home and road performance belongs to the Marshall Thundering Herd. Marshall is a solid 10-6 at home, but only 3-13 on the road for a difference of seven games.

Now here is how homefield advantage shakes out in Conference USA (in conference play only) with respect to the nation at large (with rank out of the 11 IA conferences in parentheses).

With the exception of 2006, Conference USA has ranked in the bottom half of all Division IA conferences in terms of homefield advantage.

Next up is how each Conference USA team stacks up offensively for each season. This is the ranking of yards per game in conference play. 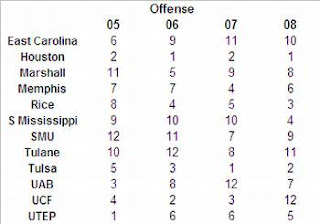 The Houston Cougars have clearly been the most consistent offense, finishing first or second in the league in offense under two different coaching regimes. The West has clearly been the dominant offensive division, with Houston, Tulsa, and UTEP finishing in the upper-half of the conference each season, and Rice doing it the past three years. Only UCF has been consistently good on offense in the East, and they fell off the map in 2008, finishing dead last in the conference. Take a look at the job Larry Fedora did in his first season at Southern Miss. The Golden Eagles had become stagnant on offense under Jeff Bower, but in Fedora's first season they were the best offense in the East. 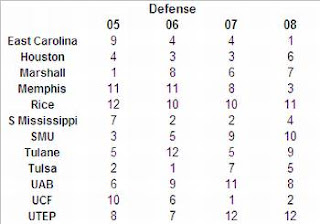 The most consistent defense in Conference USA has been that unit deployed by the Rice Owls. Unfortunately, they have been consistently bad. Very quietly, Skip Holtz has cultivated a defensive power at East Carolina. Also look at UCF. If they can maintain their defensive capability, the road back to the top of the conference could be a lot easier to navigate than previously thought. Memphis hired defensive coordinator Tim Walton prior to the 2008 season and had their best defensive showing in quite sometime. However, Walton was hired in February by the Detroit Lions to coach their secondary. Of course, correlation does not inherently equal causation, but it will be interesting to see if the Tigers slide in the defensive standings sans Walton. If you were wondering why UTEP has missed out a bowl game the past three seasons, well the answer is pretty clear. After at least posting mediocre units in 2005 and 2006 (the Miners did fail to qualify for a bowl in 2006), the defense has been the worst in the league for two years running.
Posted by matt at 4:49 PM