This week in our SDPI posts, we'll try to shed our East Coast bias as we trek out west to examine the Pac-10. 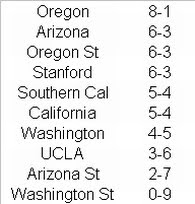 Now here are the 2009 Pac-10 SDPI standings. The standings are sorted by total SDPI with ranking for each category (out of 10 teams) in parentheses. 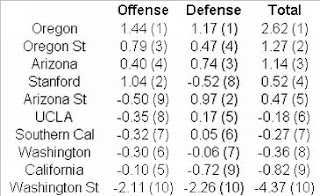 The big story in the Pac-10 in 2009 was the fall of the mighty Trojans. After winning outright or sharing 7 straight conference titles, and being a national title contender year-in and year-out, the Trojans slipped to the middle of the Pac-10 standings. Based on SDPI, their fall was no fluke brought about by poor luck or happenstance. The Trojans' offense was slightly below average and their defense was just a shade above average. Altogether, the Trojans were a middling team and their record reflected as such. However, there were 2 Pac-10 teams with conference records that didn't quite match up with their actual performances. Despite the fact that they fielded the worst offense in the Pac-10 this side of Washington State, the Sun Devils from Arizona State made up for it by fielding one of the league's best defenses. However, their poor mark in close games (0-3 in Pac-10 play in one-score games) and poor turnover margin (league worst -12) led to a poor 2-7 league record. Meanwhile, Cal won more games than they lost in the league despite being statistically the worst team besides Washington State thanks to an unblemished mark in close games (3-0 in one-score league games) and a solid turnover margin (+3).

Best Offense: Oregon 1.44
Maybe the Pac-10 had a lot of bad defenses, maybe it was just a statistical quirk based on a relatively small sample, or maybe the Oregon offense had a tough time getting going, but the Ducks had quite a conference/non-conference split in 2009. In their 4 non-conference games (began the year with 3 straight non-league games), the Ducks averaged 270 yards per game, never gaining more than 356 yards in any contest. In Pac-10 play, Oregon averaged 475 yards per game.

Best Defense: Oregon 1.17
Outside of a no-show at Stanford (505 yards allowed at 7 yards a pop), the Oregon defense acquitted itself very well, holding 5 league teams under 350 yards.

Worst Defense: Washington State -2.26
In their best defensive showing, the Cougars 'held' Southern Cal to 403 yards. If they allowed that many yards in every game, they would have finished 9th in the Pac-10 in defense!

What's in Store for Next Year?
The Trojans will be back in their customary place in 2010 right? 2009 was just a bump in the road and a slew of Rose Bowls are in the future right? Maybe not. Why? Well, as mentioned earlier, the Trojans were not a particularly good team in 2009. Their offense and defense were right around average by Pac-10 standards, and the Trojans were actually outscored by 9 points in their 8 conference games not involving Washington State. Don't forget the Trojans will also be breaking in a new coach, a coach who has yet to accomplish anything of note I might add, and will also be losing a great deal of talent including all 4 starters in the secondary. Don't pencil the Trojans in for a return to glory just yet. That's good news for the other 9 teams in the conference, but may be bad news for the Pac-10's national reputation. The 2010 Pac-10 could be a lot like the 2009 Big East in that it is a major conference with no real favorite heading into the season. So who could contend for the title in 2010? The defending champs from Oregon seemed poised to make another run at the Rose Bowl, until some minor legal issues emerged in the offseason. Stanford loses star running back Tobey Gerhart to the NFL Draft, but does return 7 other starters from the 2nd best offense in the conference. If the defense can get a little better, Jim Harbaugh will once again be one of the hottest coaching commodities come December. Mike Riley has built a consistent winner at a former college football outpost, and the Beavers have finished just one game shy of the Rose Bowl each of the past 2 seasons. The defense loses only 3 starters, and should remain one of the league's best, but the offense must break in a new quarterback and will likely go through some growing pains. Arizona State will certainly be better than their 2-7 conference record in 2009, but massive improvements on offense are unlikely as the starting quarterback, running back, and top-2 receivers must be replaced. Rick Neuheisel has yet to post a competent offense in his 2 seasons in Los Angeles, so the Bruins will likely play a few games in the Rose Bowl, but none in the postseason. Washington will likely be a trendy pick in the preseason, and the Huskies certainly showed marked improvement in Steve Sarkisian's first season, but they were still statistically one of the worst teams in the Pac-10 (below average on both sides of the ball). Cal won more Pac-10 games than they lost last season, but in their 4 losses, they were far from competitive. In loses to Oregon, Southern Cal, Oregon State, and Washington, the Bears were outscored by nearly 29 points per game (and 2 of those losses came at home). The Bears defense was also the 2nd worst in the Pac-10 last season, so the chance that they end their 52-year Rose Bowl drought is unlikely. As for Washington State, well if they somehow manage to win the league in 2010 (hell, if they qualify for a bowl game), it will be one of the biggest surprises of all time. So who does that leave? Arizona. Lesser Stoops has been quietly building a contender in Tucson. Sure the Wildcats didn't exactly end the season on a positive note, losing 33-0 to Nebraska in the Holiday Bowl, but they were solid on both sides of the ball in the Pac-10. If they can overcome the loss of offensive coordinator Sonny Dykes (head coach at Louisiana Tech) and some attrition on defense, the Wildcats could find themselves in their first ever Rose Bowl come early January.
Posted by matt at 6:05 PM

The Pac-10 always has a reputation as an offensive-minded conference, and it's easy to understand why if teams are putting up on average over 3,000 yards per game!!!

Did you just pick Arizona to win the Pac 10? Honestly, I think they will fall, Oregon returns 21 starters from last season. Yes, they will be starting a new QB, but Nate Costa has been in the system for 4 years, and was poised to be the starter before a knee injury did him in during fall camp of 2008. The Oregon D will be lights out next season (by pac 10 standards).

I don't know that I'd 'pick' them to win the league. BTW, I'm interested as to whom the projection system spits out as the champ in August (thats whats called a tease in the business). I do think they would be a good futures play. I haven't seen any Pac-10 champ odds as of yet, but I would imagine the Wildcats would be undervalued. If I'm a fan of any Pac-10 school besides Washington State, I think you have to go into the season believing the Rose Bowl is at least in the realm of possibility.

@Kurt: Thanks for stopping by.