In this fourth installment of the mid-season (I suppose a more apropos term would now be late-season) SDPI ratings we will attempt to handicap the races in Conference USA, the MAC, and the Sun Belt. Enjoy.

Conference USA Godfrey is a Godsend
Freshman quarterback Jeff Godfrey has been just what George O'Leary needed to revive his dormant offense at UCF. In 2008 and 2009, following the departure of running back Kevin Smith (over 2500 yards rushing in 2007), the UCF Knights scored 30 or more points 7 times in 25 games and were held to 10 points or fewer 6 times. Since Godfrey became the full time starter in the 3rd game of the year, the Knights have scored 30 or more points 5 times in 7 games. Godfrey has only thrown for 6 touchdowns, but he has completed nearly 66% of his passes, averaged 9.3 yards per attempt (6th nationally among qualifying passers), and contributed 499 yards on the ground. Along with a solid defense, he is a key reason UCF is unbeaten in league play and ranked for the first time in program history.
Here are the Conference USA standings through Saturday's games. 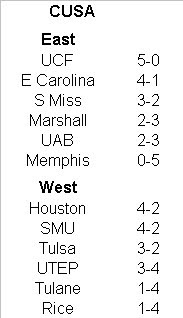 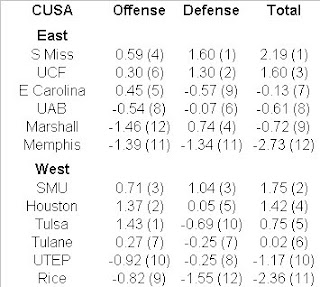 East Carolina-After winning a pair of Conference USA titles under Skip Holtz with their defense, the Pirates have morphed into a team that wins with their offense and hopes their defense doesn't screw up too much.
Houston-The Cougars own the tie-breaker edge over SMU, but appear to have the tougher schedule than SMU (Tulsa and @ Southern Miss for Houston versus Marshall and @ East Carolina for SMU).
Marshall-The defense is again a bright spot, but the offense continues to crater.
Memphis-Larry Porter is finding it a lot harder to win at Memphis than it was at LSU.
Rice-Its nice to see that in this ever-changing world the Owls defense, or lack thereof, is a constant we can always rely on.
SMU-Statistically, the best team in the West, but the Mustangs let Houston (and Tulsa) back in the race by losing to UTEP.
Southern Miss-Statistically the league's best team. I'm surprised their spread versus UCF is as high as it is (UCF -10).
Tulane-The Green Wave are better than you think.Drawing both Southern Miss and UCF from the East did them no favors.
Tulsa-That Hail Mary they gave up to East Carolina in Week I may end up costing them the West division.
UAB-The Blazers have been all over the map in road games, getting crushed by SMU and UCF, but hanging with Tennessee and Mississippi State and actually knocking off Southern Miss.
UCF-My eyes tell me they are the league's best team. The numbers say they are close. Even if they fall to Southern Miss this week, if they can beat Tulane and Memphis on the road, they will be hosting the CUSA Championship Game.
UTEP-The early favorite for worst bowl team. Prior to their upset over SMU, the Miners had beaten Arkansas Pine-Bluff (IAA), New Mexico State, Memphis, New Mexico, and Rice. Those 5 teams have combined for 6 IA wins.


MAC Return of the MAC
Last season, Central Michigan became the first MAC team to end the season ranked since 2003. If Northern Illinois can get past their biggest remaining regular season threat tonight at home versus Toledo, they could make it a MAC repeat in the polls. After Toledo, the Huskies go on the road to Ball State and eastern Michigan to close the regular season. Ball State is awful, and while Eastern Michigan is better than most think, the Huskies should be substantial favorites in both. Should they win all 3, their opponent in the MAC Championship Game will likely be the Ohio/Temple winner (MAC showcase next Tuesday). The Huskies have already beaten Temple and would likely be favored over either. The bowl picture is still very much in flux, but the Huskies have proven their mettle against BCS-conference teams (losing by 6 at Illinois and winning at Minnesota by 11), so a win against a Big 10 foe is not out of the question. Winning out may not be assured, but if the Huskies do, they will certainly find themselves ranked in the final poll.
Here are the MAC standings through Saturday's games. 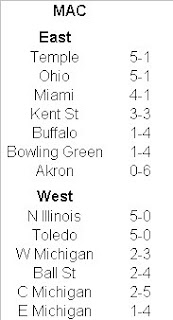 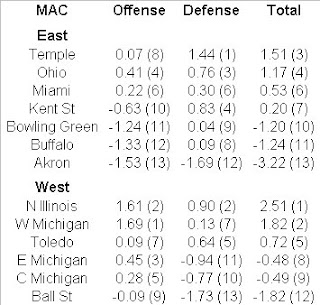 Akron-Not a whole lot of positives here. The Zips are easily the MAC's worst team. Not only are they winless in the MAC, they also lost to IAA Gardner-Webb.
Ball State-The Cardinals tried to give Akron their first win on Saturday, but they prevailed in OT.
Bowling Green-The Falcons had only 8 returning starters, so most felt this was a rebuilding year. And boy were they right.
Buffalo-The Bulls were much better than their 3-5 MAC record last year, but those positive indicators haven't helped them this season.
Central Michigan-The Chippewas have clinched their first losing season since 2004.
Eastern Michigan-While they have only improved by one game on their winless 2009 campaign, on a down-to-down basis, the Eagles are much better.
Kent State-The struggling offense has wasted a solid defensive performance.
Miami-One win away from bowl eligibility. Not bad after going 1-11 in 2009.
Northern Illinois-The MAC's best and most balanced team. Jerry Kill finally has an offense to compliment his fine defense.
Ohio-Frank Solich continues to do great things in Athens. Bobcats face Temple next Tuesday in a game that should decide the MAC East.
Temple-The Golden Child continues the rebuilding effort in Philly. The Owls have been especially dangerous once they inserted Mike Gerardi into the quarterback spot.
Toledo-Rockets are not quite as good as the other top MAC teams, but should be bowling for the first time since 2005.
Western Michigan-Despite their strong peripherals, the Broncos now must win out to get to a bowl.


Sun Belt Troy And...
The Troy Trojans are one win away from becoming bowl eligible for the fifth consecutive season. The big question is, which Sun Belt team will join them in the postseason party. Arkansas State and Louisiana-Monroe need two more wins to get to bowl eligibility while fellow conference contender Florida International and disappointing Middle Tennessee State need three. For Louisiana-Monroe and Florida International, this would mark their maiden postseason voyages. A bowl bid for Middle Tennessee State would be their third and one for Arkansas State would be their second ever.
Here are the Sun Belt standings through Saturday's games. 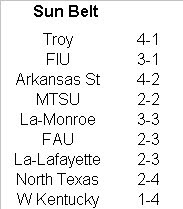 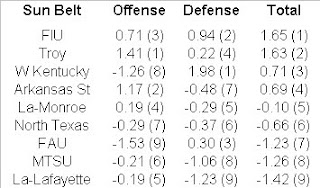 Arkansas State-This is a nice rebound for Arkansas State (especially on offense) after their offense cratered last season with a revamped offensive line.
Florida Atlantic-As expected, the Owls have experienced some growing pains after losing all-time quarterback Rusty Smith.
Florida International-The numbers say they are the leading contender to Troy's Sun Belt throne. And what do you know, they get a chance to prove it this week.
Louisiana-Lafayette-The defense has really fallen on hard times. Both of their wins have come by a combined 8 points.
Louisiana-Monroe-The Warhawks complete their SEC West gauntlet on Saturday with a trip to LSU (already played Arkansas and Auburn).
Middle Tennessee State-After finishing second in the Sun Belt in total offense last season, quarterback Dwight Dasher has floundered without the tutelage of Tony Franklin.
North Texas-The Mean Green finally notched multiple Sun Belt wins, but they came too late save Todd Dodge.
Troy-Surprise surprise. They once again lead the Sun Belt.
Western Kentucky-Hilltoppers surprisingly have the league's best defense. They could have a much better record as 3 of their 4 league losses have come by 7, 5, and 1 point.
Posted by matt at 2:46 PM