After reviewing the ACC last week, we now turn our attention to the Big East. The Big East ended the 2010 season without a single team ranked in the AP Poll, and also had the indignity of having its champion lose to Temple. if you're interested in mocking me, here's the link to last year's Big East post.

Here are the 2010 Big East standings.

Now here are the 2010 Big East SDPI standings. The standings are sorted by total SDPI with ranking for each category (out of 8 teams) in parentheses.

Connecticut became one of the most unlikely BCS bowl participants ever by winning their final five league games after an 0-2 start and ending the reign of two-time defensing champ Cincinnati. Pittsburgh and West Virginia were bridesmaids once again. Beginning in 2008, both the Mountaineers and Panthers have finished either tied for second or first place, but have yet to play in a BCS bowl.

So Who Was Better Than Their Record Showed?
Based on SDPI, Cincinnati should have been one of the top teams in the Big East. The Bearcats boasted the top-ranked offense in the conference, and despite their poor showing on the defensive end, one would have expected them to at least finish with a winning record. Unfortunately for the kings of the Queen City, the Bearcats had a proclivity for turning the ball over and failed in their endeavor to take the ball away from their opponents. 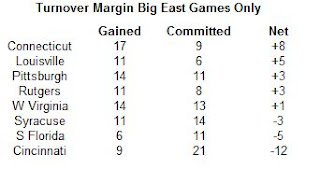 The Bearcats committed the most turnovers in the conference by far (averaging three per game) and forced the second fewest. When that happens even the best of teams will struggle to win games, and coupled with the Bearcats other defensive inefficiencies, it made for a long season for the defending Big East champs.

So Who Was Worse Than Their Record Showed?
Obviously the team with the biggest discrepancy between their conference record and their SDPI numbers was league champion Connecticut. The Huskies won the Big East, but were statistically one of the weakest teams in the conference, and became arguably the weakest team to ever qualify for a BCS bowl. How did the Huskies do it? Remember that turnover chart earlier? If you don't, scroll up a few inches. The Huskies forced the most turnovers in the conference and boasted the league's best turnover margin. I wanted to look a closer at the dream season Connecticut experienced. The Huskies lost their first two league games and looked as if they could miss out on the postseason entirely. However, they won their final five games, beating co-champs West Virginia and Pittsburgh along the way to grab the tiebreaker advantage. What changed in the final five games versus the first two?

As you can see, the Huskies were outgained by over 160 yards per game in their first two league losses. However, they didn't suddenly become dominant in their final five games. While they did improve on both sides of the ball, they were still outgained by about 55 yards per game over their five-game winning streak. The difference was two-fold. Turnovers and close games. The Huskies did not force a single turnover in their first two games, but they forced 17 in their final five games! The randomness and vagaries of close games also contributed to their success. The Huskies lost their league opener against Rutgers by three points. After that game, the Huskies owned crunch time, beating West Virginia, Pittsburgh, and South Florida each by three points or fewer.

Worst Offense: Syracuse -0.97
The Orange, Huskies, and Bulls were all clustered close together near the bottom of the Big East in terms of offensive firepower, with the Orange ranking below the other two.

Best Defense: West Virginia 1.24
Only one Big East team, Pittsburgh, topped 300 yards against the Mountaineer defense. It really was a shame the offense could not pull their weight. The Mountaineers lost two conference games when they allowed 19 and 16 points respectively.

Worst Defense: Rutgers -1.70
The Scarlet Knights opened league play well enough, beating eventual champ Connecticut and holding them to just 284 yards of offense. Unfortunately, they would go on to lose their last six league games while allowing an average of 456 yards per game.

Running Down a Dream
Can you believe this November will mark five years since Rutgers burst onto the national scene with their program defining Thursday night upset of Louisville? My, how time flies. That win marked Rutgers first ever foray into the AP top-10 and though they failed to capitalize on the big win with a BCS bowl appearance, the Knights finished the season 11-2 and ranked number 12 in the nation. Many observers probably believed (and rightfully so) that Rutgers was poised to contend for the Big East crown for the next several seasons. However, in the four seasons after their 2006 breakthrough, the Knights have gone a rather pedestrian 12-16 against their conference foes and have failed to finish in the final polls, much less compete for a conference title (save for 2008 when they finished 5-2, one game back of Cincinnati). One reason for their failure to stay relevant since their shining moment on national television has been the decline of their running game.

You may remember in 2006, the Knights had the services of a pair of future NFL running backs in Brian Leonard and Ray Rice. Rice was still toting the rock in 2007, but in the three seasons since his departure, the Knights have gone from an average running team, to one that is among the worst in the Big East. As Connecticut proved in 2010, the Big East is always one of the more wide-open BCS conference races in the nation. If the Knights are to do what many expected and claim a conference crown, they must get more production from their ground game.
Posted by matt at 6:18 PM