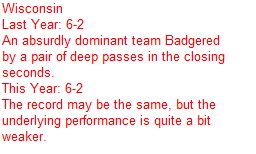 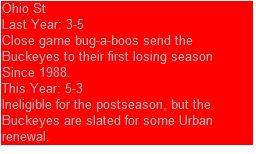 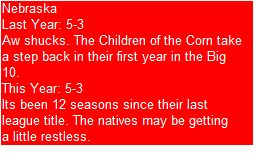 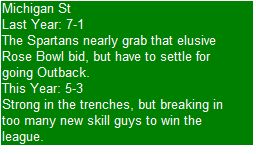 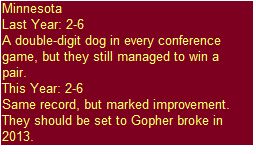 The Illini averaged nearly seven fewer yards per pass attempt over their final six games, a spectacular decline, especially considering their completion percentage did not see a significant drop. They also averaged about a yard fewer per rush. The pair of numbers that may have portended their precipitous decline is the large sack and turnover totals Northwestern and Indiana racked up even in defeat. The Wildcats and Hoosiers combined to sack Illinois quarterbacks seven times. The Illini actually improved their protection, albeit marginally over their final six games, merely allowing three sacks per game. However, the lack of pass protection was clearly an issue even when they were moving the ball and winning. Illinois also committed five turnovers in their two wins. Their turnover rate was relatively unchanged (2.5 per game in the wins and 2.67 in the losses), but their proclivity for killing drives with mistakes was manifest even early in the season. While the schedule did toughen up in the second-half, with the Illini facing five bowl teams in their final six games, their offensive decline was likely a market correction of sorts. The Illini simply performed well above what could reasonably have been expected based on the weaknesses and mistakes evident in their offensive numbers from the first two games.
Posted by matt at 6:28 PM