The Best and Worst Home and Road Records 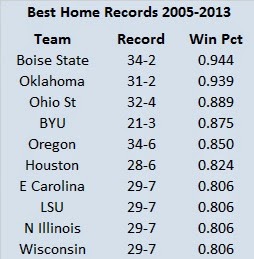 No shocker here. The infamous Smurf Turf and the Norman plains have proven a tough test for WAC, Mountain West, and Big 12 opponents over the past decade. Only four teams, TCU – more on them later, San Diego State, Texas Tech, and Kansas State have won conference games at Boise State or Oklahoma since 2005. The only real minor surprises on this list are probably Houston, East Carolina, and Northern Illinois. Seven teams on this list have played in BCS bowls and Houston nearly earned a BCS bowl invite until, ironically, they lost at home to Southern Miss in the Conference USA Championship Game in 2011. Now which teams have the worst home marks since 2005? 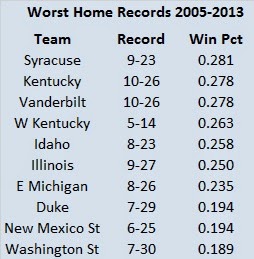 Only three teams, Duke, New Mexico State, and Washington State have won less than one fifth of their conference home games the past nine seasons. The Blue Devils and Cougars appear to be somewhat on the upswing, with both having participated in bowl games last season. Meanwhile, the Aggies from New Mexico State are still looking for their first bowl appearance since 1960, but at least they have a conference now. Other interesting tidbits: Two dome teams (Syracuse and Idaho) appear on this list. What does that imply? Mainly that Syracuse and Idaho have tended to be pretty bad since 2005, with a few minor exceptions. Eastern Michigan has averaged just 3678 in per game attendance  the past three seasons. Fans of the Eagles are not missing much. Which teams have been road warriors? 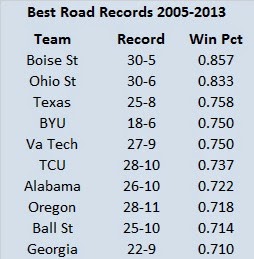 Boise State not only has the best home record over this span, but they have also been nearly as untouchable on the road. Four of the teams with the best road conference records have either played for or won a national title (Alabama, Ohio State, Oregon, and Texas). In addition to those four, Boise State, Georgia, TCU, and Virginia Tech have played in multiple BCS bowl games. TCU also owns the distinction of having won at both Boise State (2011) and Oklahoma (2005), the two best home teams. However, their win over Oklahoma came when the Sooners and Horned Frogs were not conference opponents. The real surprise on this list is probably Ball State. The Cardinals have been sporadic bowl participants, first under Brady Hoke (2007 and 2008) and currently under Pete limbo (2012 and 2013), but their dominating road performance was certainly unexpected. And finally, I present the worst road teams. 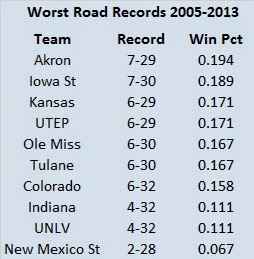 New Mexico State nearly took the mantle of being the worst home and road team since 2005. The Aggies road winning percentage is just more than half that of Indiana and UNLV, the silver medalists in road ineptitude. To me, the most interesting fact about any team on this list is Kansas. The Jayhawks have been absurdly bad over the past five seasons, winning just three Big 12 games in that span. However, you may remember that in 2007, they enjoyed a season for the ages, rising to number two in the polls and winning the Orange Bowl. In 2007, the Jayhawks won all four of their Big 12 road games, but in the other eight seasons, have won just a pair.
Posted by matt at 5:34 PM