In the last post we looked at what to expect after teams experience a ‘Second-Year Surge’. Now I want to examine the aftermath of the opposite—the ‘Second-Year Stagnation’. Sometimes a coach steps into a great situation in his first year on campus. Perhaps the previous coach left the cupboard fully stocked, maybe the schedule was unusually easy, or maybe the team just experienced a great deal of good fortune. Then, in Year 2, when fans and administrators expect continued success, the team regresses. Perhaps star players graduated, maybe the team experienced an influx of injuries, or the new coach didn’t recruit very well. Whatever the reason, the team stagnated, and now the coach finds himself in need of a rebound to keep his job. In the macro sense, what are his prospects for a rebound? To answer this question, I looked at the results of all FBS coaches who debuted at a school from 2005-2012 and set the arbitrary definition of ‘stagnation’ to a decrease of at least three regular season wins. If you recall, I used four wins as the baseline for a ‘surge’, but frankly, if we use four wins as the baseline for stagnation, we won’t have very many teams to examine. Using three wins as the baseline yielded nine teams. They are listed chronologically in the table below. The table includes the record in the coaches’ first year, second year or Stagnation Year, and third year or Follow-Up Year. The Dif column is the difference in the Stagnation Year and the Follow-Up Year. Stanford and Temple are color-coded differently because their coaches left after the stagnation (Walt Harris was fired and Steve Addazio took a better job), so they are actually coached by a different guy in the Follow-Up Year.

You’re an adult. You can view the table and judge for yourself, but I will throw out some averages for you. In the ‘Follow-Up Year’, the nine teams that ‘Stagnated’ improved by an average of 1.5 wins in the regular season. However, if we remove the two teams that changed coaches (which we probably should since coaching change represents a great deal of upheaval), the seven remaining teams improved by an average of 1.86 regular season wins. So we know the average team improved by around 1.9 wins, but what if we look at a different kind of average? Yes, I am talking about one of the most unappreciated averages, the mode.

Using the mode, we see the average team improved by one game the following season. However, the mode for this sample is only two teams. This low number should set off a sample size alert. If we look at it another way, five of the seven teams improved by at least one game, six of the seven teams won just as many games the following season, and only one team continued their descent. Here is a visual look at what I just wrote about. 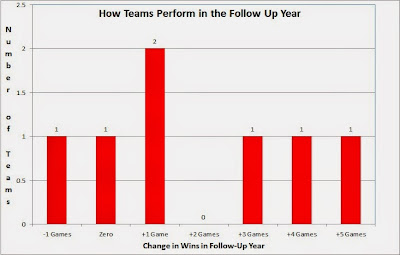 So the most likely expectation after a ‘Stagnation’ is for a modest improvement the following year. With this in mind, which teams from 2014 ‘Stagnated’? Glad you asked.

These four teams declined by an average of three wins in 2013, and Auburn was the lone squad to play in the postseason both years. The good news for this quartet and their head coaches is that they are likely to see modest improvement in 2015. Of course, modest improvement would impact each team differently. An extra two wins would put Auburn in contention for the SEC West title, while modest improvement for the other three teams would get them closer to bowl eligibility.
Posted by matt at 5:47 PM