10-Year Anniversary: Dominance Points in the Big East and WAC

It’s hard to believe, but at the end of July, this blog will be celebrating its 10-year anniversary. As someone who starts a lot of things and rarely finishes them, I am quite surprised I have been able to keep this up for a solid decade. If you’re into nostalgia, or simply a Tennessee hater, here’s a link to my first post (it proved quite clairvoyant). In the interest of celebrating the anniversary, I wanted to come up with a theme I could post about over the course of the summer. I decided to look at each conference and determine which team dominated that conference over the past decade. One way to do this would be to simply look at won/loss record or championships or divisions won. However, I have a lot of free time, so I decided on something a little different. We’ll call them ‘Dominance Points’ and here is how they are calculated. For a conference without divisions, take the number of teams in the conference and award the champion(s) that many points. The larger a conference is, the more points that champion receives as it is ostensibly harder to win an 11-team conference that it is an eight-team conference. Take the second place team and award them the number of teams minus one. Take the third place team and award them the number of teams minus two. Continue on. For example, TCU and Baylor tied for the Big 12 title in 2014. Since the Big 12 had ten teams, both Baylor and TCU receive ten points apiece. Kansas State finished third (there was no second place team since Baylor and TCU tied) so they receive eight points. At the other end of the standings, last place Iowa State gets credit for participating and receives a single point. But what about conferences that have divisions? Give the division champion(s) points equal to the number of teams in the division. So in a six-team division, first gets six, second gets five, third get four, etc. However, if that division champion also wins the conference, give them points equal to the total number of teams in the conference. No double-booking though. Northern Illinois, the 2014 MAC champion, gets 13 points for winning the conference, not 19 for winning their division and the conference. Bowling Green on the other hand, receives 7 for winning their division against six other teams. No attempt is made to break conference or division ties. If three teams tie for a division title, each receives the max number of points, regardless of the team that actually appeared in the conference title game.

With that out of the way, let’s delve into a pair of conferences that did not survive realignment, the Big East and the WAC. Both these conferences ceased to exist following the 2012 season. However, they both live on in my memories and as a pair of basketball leagues.

We'll start with the Big East. Here are the Dominance Points for Big East teams for the period 2005-2012. The eight teams that formed the Big East for the majority of this time period are grouped together, with Temple (a former conference member) listed separately as they were only a member for one season. 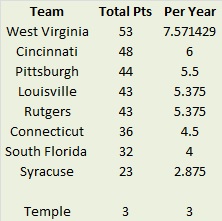 West Virginia easily accrued the most dominance points despite leaving the conference following the 2011 season. The Mountaineers never finished lower than second place in seven seasons during this time period. The Mountaineers and Bearcats tied for the most conference titles in this span with four (some shares) apiece. The final season of the Big East featured the always exciting four-way tie at the top of the standings, meaning that of the eight core Big East members, each except South Florida earned at least one share of a conference title from 2005-2012.

Moving on to the WAC. Once again, I have listed the nine core members separately from the Lone Star neophytes who were present for just a single season. 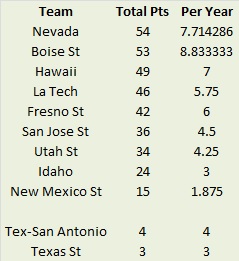 Amazingly, Boise State did not accrue the most Dominance Points, primarily because they were only in the WAC for six seasons. Nevada enjoyed an extra year in the conference and still only edged the Broncos by a single point. After the heavy hitters departed, leaving the WAC a shell of itself in 2012, the Aggies from Utah State won their first conference title since the sharing the Big West championship in 1997 (interestingly, that was also a micro-conference).
Posted by matt at 6:26 PM