Last week, we looked at how MAC teams fared in terms of yards per play. This week, we turn our attention to how the season played out in terms of the Adjusted Pythagorean Record, or APR. For an in-depth look at APR, click here. If you didn’t feel like clicking, here is the Reader’s Digest version. APR looks at how well a team scores and prevents touchdowns. Non-offensive touchdowns, field goals, extra points, and safeties are excluded. The ratio of offensive touchdowns to touchdowns allowed is converted into a winning percentage. Pretty simple actually.

Once again, here are the 2016 MAC standings. 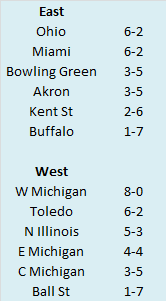 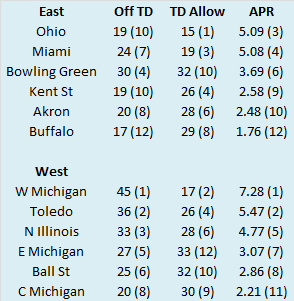 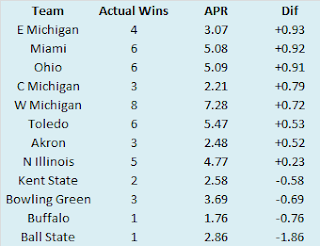 I use a game and a half as a line of demarcation to determine if teams drastically over or under perform their APR. Ball State was the lone MAC team that saw their actual record differ significantly from their APR. And the culprit(s) are pretty easy to identify: close games and turnovers. The Cardinals were 0-4 in one-score MAC games, with four of their seven conference defeats coming by a combined 18 points. Ball State also had the worst in-conference turnover margin of any MAC team, losing nine more turnovers than they forced.

Life as an FBS coach has probably not gone the way Lance Leipold had hoped. Leipold left Division III power Wisconsin-Whitewater after winning six national championships in eight seasons and owning a career winning percentage north of .900 (109-6). In his two seasons at Buffalo, Leipold has already lost nearly triple the games he lost at Watergate Whitewater. Perhaps even more troubling, his second Buffalo team was much worse than his first, winning three fewer games and rating out as one of the MAC’s worst teams by almost any statistical measure. Is there any hope for the Bulls in 2017, or is 2018 the earliest the Buffalo can expect a return to the postseason? To answer this question I looked at every FBS coach hired since 2006 that had produced consecutive losing regular seasons to begin his tenure. If a coach finished 6-6 or 6-7 with the benefit of a bowl game, they are not included here. This query produced a decent sample of 54 coaches. How did those coaches perform in their third season? The following table lists the average regular season improvement from Year 2 to Year 3 for these coaches.

Over the course of a twelve game regular season, coaches that began their career with back-to-back losing campaigns picked up nearly two extra wins in their third season. Two wins would be nice, but they won’t send Buffalo back to the postseason. Plus, roughly two wins is just an average. What are the odds Buffalo improves in 2017? Once again, I examined the 54 coaches and identified whether they improved, declined, or stayed the same in their third season.

This is where things start to look better for Buffalo. More than three quarters of the coaches saw their teams improve in their third season and about a quarter either declined or stayed the same. Take a look at that last row though. More than a third of the teams saw significant improvement (three or more games) in their third season. Buffalo fans need only look to their own conference last season to see some examples of this phenomenon.

Chris Creighton began his tenure at perennial punching bag Eastern Michigan with 2-10 and 1-11 records, but the Eagles surged to 7-5 in his third season. Similarly, Chuck Martin began his rebuild at Miami of Ohio with a 2-10 and 3-9 campaign. His Red Hawks began 2016 0-6, but won their last six games and nearly stole the division. Elsewhere in college football, former North Dakota State head coach Craig Bohl was just 6-18 in two seasons at Wyoming. His Cowboys improved by six games and won their division in his third season. Jeff Monken led Army to their first win over Navy since 2001 and seven regular season wins after winning just six games in his first two seasons at West Point. At Wake Forest, Dave Clawson led the Demon Deacons to their first bowl since 2011 after winning just six games in his first two seasons.

By his third season, a coach has at least two full classes of his own recruits and the holdovers from the previous administration have had ample time to learn his system. If the first two seasons have featured more losses than wins, he has probably also been successful in holding on to his coordinators and other assistants. Thus, the third season presents an excellent opportunity for a leap forward. I wouldn’t go so far as to guarantee that Buffalo will return to the postseason in 2017, but significant improvement would not surprise me.
Posted by matt at 3:27 AM

does david beatty of kansas also apply to this 3rd year magic theory? on the hot seat already - he better hope it does!
i really enjoy your informative posts and was hoping you were going to continue your always entertaining "MAGNIFICENT SEVEN" selections this 2017 College Football Season. i know only five games last week but was hoping to hear something out of you this week?
thanks for all of your research. unfortunately this is how i make my living and every bit of historical, statistical advantages i can gain - makes my decisions easier to make. i have learned thru the
hoss
sierra city, california and big tcu fan!

Thanks for reading. Kansas certainly applies to the third year magic theory. And, as a TCU fan, I'm sure you know they were able to poach Doug Meacham to be their offensive coordinator. Since I bet on Kansas (over 1.5 wins) last season, I watched a good bit of their games. They seemed to be able to make some nice plays here and there, but were unable to sustain drives. I didn't like them enough to bet on them when I went to Vegas this year (can't remember what the o/u was), but with that soft non-conference schedule, I could see them winning four games in 2017. A bowl game is probably still a year away at the earliest.

Look for the Magnificent Seven picks tomorrow (Wednesday morning). I'm still finalizing who I like. I'm a little concerned I only really like dogs this weekend, so I am trying to find a few favorites to even things out.