Summer of Polls Part IV: Under and Overrated Teams

Ever looked at the final AP Poll rankings for a particular year (say a year you don’t remember well thanks to drunken tailgate shenanigans) and thought: Man, [insert team name] was overrated. Or vice-versa. Have you ever scoured the final rankings and though: Man, [inserted team name] was ranked that low? I have. Many times. And, in the interests of being somewhat scientific, I wanted to quantify whether a team was ranked too high or too low in the final AP Poll. To do that I looked at the final AP Poll ranking of every Power 5 team since 2005. I then ran a regression analysis based on their record and final poll position. This regression spit out a formula. I used this formula to reverse-engineer the poll ranking of all the ranked Power 5 teams and determined which teams were the most over or underrated. If you want the results, skip on down, but I wanted to give some background and caveats before delving into them.

I only looked at teams that were in either the ACC, Big 10, Big 12, Pac-10/12, or SEC during the season in question. The Big East, with future Power 5 members Louisville, Pittsburgh, Rutgers, Syracuse, and West Virginia, was a BCS conference during this time frame, but I left those teams out when they were Big East members because I thought it would skew the results. Similarly, when Utah and TCU were Mountain West members, their final rankings were not included in this analysis. Other current mid-majors like Boise State, BYU, and Central Michigan were also left out. The regression analysis produced an R squared value of .7868 between winning percentage and final ranking with a regression formula of: -74.675*(win %) +71.347.

With that out of the way, here are the top-ten most overrated Power 5 teams since 2005. 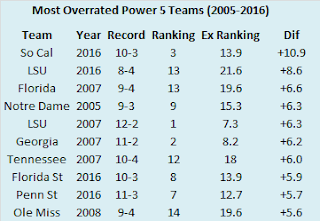 In this analysis, teams tended to be overrated in bunches. The 2007 and 2016 seasons produced eight of the top-ten overrated teams. In 2016, pollsters were chomping at the bit to rank Southern Cal in the top-five despite the Trojans not winning their conference and losing by 46 points to Alabama. Southern Cal did close the year by winning nine consecutive games, with seven coming by double-digits, but if Arizona had a similar resume, I doubt they end up third in the country. Other notables from this list include last year’s LSU who are dinged by missing out on an assumed victory over South Alabama that would have given them nine wins, Tim Tebow’s Heisman winning Florida Gators (along with three other SEC teams from 2007 including that year’s national champion) who lost to a team that lost to an FCS team, Charlie Weis’ first Notre Dame squad, and another pair of teams from last season that lost blowouts, but closed the season strong.

And here are the most underrated Power 5 teams since 2005. Keep in mind, in order to make this list teams must finish ranked. So these teams finished ranked, but probably should have been ranked higher. 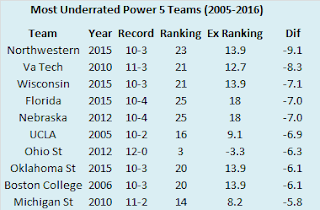 A rational explanation can be given for the relatively low finish for most of these teams. 2015 Northwestern won a lot of close games, but was blown out in their bowl game. 2010 Virginia Tech lost to an FCS team and was blown out in their bowl game. 2015 Florida won a weak division. 2012 Nebraska gave up 70 points in their conference championship game and then lost their bowl game for good measure. 2012 Ohio State was banned from the postseason. Undefeated teams also throw the model off as only four teams in addition to Ohio State have finished unbeaten (Texas 2005, Alabama 2009, Auburn 2010, and Florida State 2013). 2015 Oklahoma State was blown out in the Sugar Bowl in the last hurrah for Ole Miss. 2006 Boston College played in the ACC in 2006. You get the idea.

And finally here is a list of teams that probably should have finished ranked based on their record, but ultimately did not. 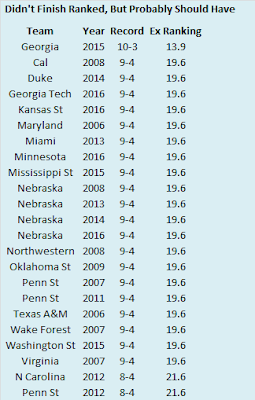 This is basically a list of every Power 5 team since 2005 that finished either 8-4 or 9-4 and did not factor into the final polls. Some of these teams are non-traditional powers that enjoyed solid seasons (Duke, Maryland, Minnesota, Mississippi St, Wake Forest, Washington State, and Virginia), but others are a little more curious. Not sure which pollsters’ wife Bo Pelini slept with (all of them?), but Nebraska finished unranked three times during his tenure despite 9-4 records. That bias also carried over to his successor. Pollsters may have been rankled by curmudgeon (and later sexual assault enabler) Joe Paterno as his teams finished unranked twice despite 9-4 records. However, the team with the biggest beef appears to be Georgia. The Bulldogs finished 10-3 in 2015 and even won their bowl game, but couldn’t wrangle a ranked finish despite playing in the SEC.
Posted by matt at 3:33 AM