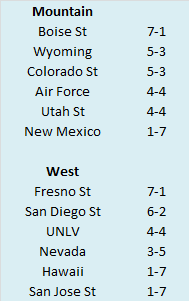 So we know what each team achieved, but how did they perform? To answer that, here are the Yards Per Play (YPP), Yards Per Play Allowed (YPA) and Net Yards Per Play (Net) numbers for each Mountain West team. This includes conference play only, championship game excluded. The teams are sorted by division by Net YPP with conference rank in parentheses. 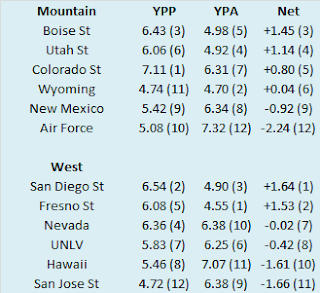 College football teams play either eight or nine conference games. Consequently, their record in such a small sample may not be indicative of their quality of play. A few fortuitous bounces here or there can be the difference between another ho-hum campaign or a special season. Randomness and other factors outside of our perception play a role in determining the standings. It would be fantastic if college football teams played 100 or even 1000 games. Then we could have a better idea about which teams were really the best. Alas, players would miss too much class time, their bodies would be battered beyond recognition, and I would never leave the couch. As it is, we have to make do with the handful of games teams do play. In those games, we can learn a lot from a team’s YPP. Since 2005, I have collected YPP data for every conference. I use conference games only because teams play such divergent non-conference schedules and the teams within a conference tend to be of similar quality. By running a regression analysis between a team’s Net YPP (the difference between their Yards Per Play and Yards Per Play Allowed) and their conference winning percentage, we can see if Net YPP is a decent predictor of a team’s record. Spoiler alert. It is. For the statistically inclined, the correlation coefficient between a team’s Net YPP in conference play and their conference record is around .66. Since Net YPP is a solid predictor of a team’s conference record, we can use it to identify which teams had a significant disparity between their conference record as predicted by Net YPP and their actual conference record. I used a difference of .200 between predicted and actual winning percentage as the threshold for ‘significant’. Why .200? It is a little arbitrary, but .200 corresponds to a difference of 1.6 games over an eight game conference schedule and 1.8 games over a nine game one. Over or under-performing by more than a game and a half in a small sample seems significant to me. In the 2017 season, which teams in the Mountain West met this threshold? Here are Mountain West teams sorted by performance over what would be expected from their Net YPP numbers. 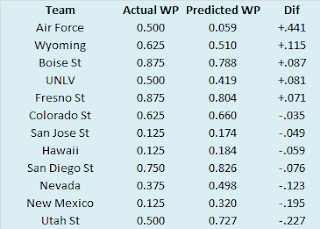 Air Force significantly over-performed relative to their YPP numbers while Utah State and to a lesser extent, New Mexico, under-performed. Air Force finished 3-1 in close conference games, while New Mexico and Utah State both finished 0-2 in such contests. New Mexico also had an in-conference turnover margin of -12 which was second worst in the Mountain West (more on the worst team later). For Air Force and Utah State, 2017 continued long term trends, at least in regards to over and under-performance, under their respective head coaches.

Troy Calhoun has been in charge at Air Force since 2007. During his eleven seasons in charge of the Falcons, his teams have finished with a winning conference record eight times despite never finishing higher than third in Net YPP. His teams have exceeded their expected conference record based on Net YPP by at least .100 seven times. Overall, his teams have averaged a winning percentage about .122 points higher than would be expected based on their YPP numbers. That equates to nearly one additional conference win over an eight-game season. The table below summarizes what I just said, listing the Falcons Net YPP finish each season under Calhoun as well as the difference in their actual winning percentage and expected winning percentage based on YPP. 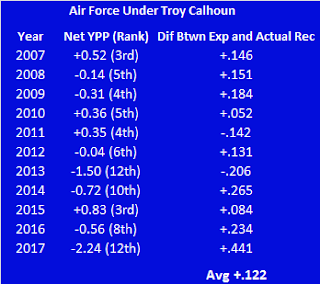 Conversely, Utah State teams coached by Matt Wells have tended to under-perform relative to their Net YPP. Wells has been in charge in Logan for five seasons beginning with 2013. His teams have never finished lower than fourth in the conference in Net YPP (the top third in the twelve team Mountain West), and yet his teams have twice finished with non-winning conference records (including a last place divisional finish in 2016). His teams have under-performed by at least .200 twice in five seasons and have over-performed by at least .100 just once. Overall, his teams averaged a winning percentage about .130 points lower than would be expected based on their YPP numbers. That equates to about one fewer conference win over an eight-game season. I have duplicated the previous table with the same stats for Wells’ teams. 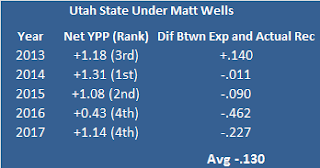 With eleven season’s worth of data, teams coached by Troy Calhoun seem to have an ability to win more games than we would otherwise expect based on their Net YPP numbers. With less than half the data, it’s unfair to render judgement on Matt Wells yet. His teams could be in the midst of a slump that breaks in 2018 (his first three teams slightly exceeded their expected record in the aggregate). However, if his teams significantly under-perform again in 2018, it might be time to further scrutinize his in-game decision making.

Before leaving the Mountain West for the week, I wanted to mention San Jose State. The Spartans struggled in their first season under Brent Brennan, winning just one game against an FBS opponent while losing nine games by at least 20 points. The Spartans were bad, but their suckitude was amplified by their awful turnover margin. In conference play, the Spartans turned the ball over 25 times while gaining just eight turnovers of their own for a margin of -17. Since 2005, only four other teams have posted an in-conference turnover margin of at least -2 per game, including a recent Mountain West team. Those teams all improved substantially the following season.

I wouldn’t go purchasing Mountain West Championship Game tickets just yet were I a San Jose State fan, but the Spartans should be much more competitive in 2018.
Posted by matt at 3:27 AM