I tend to think of myself as being pretty self-aware. I have biases, but I try to write objectively and let data guide my conclusions. That being said, I love the triple-option and I have thoroughly enjoyed the ten years Paul Johnson has been running it at a Power Five program. My affinity for the offense colors my perception of Georgia Tech. Johnson’s tenure at Georgia Tech has seen success (three ACC Championship Game appearances and one title), but also failure (the inability to produce an above-average defense, a non-conference loss to Kansas, and the first two bowl-free seasons in Atlanta since the mid-90s). I’m not here to try to change your mind about Johnson, the option, or Georgia Tech, but I want to share an amazing fact that I discovered while pouring over Johnson’s resume this summer.

Excluding the conference championship game (where Georgia Tech is 1-2), the Yellow Jackets are a respectable 46-34 in ACC play under Johnson. For your convenience, I’ve listed out Johnson’s record against each ACC team below and separated them out as intra or inter-division games. 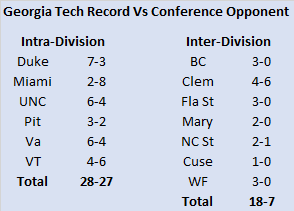 The Yellow Jackets have been perfectly mediocre against their Coastal Division opponents, but they have won over 70% of their conference games against the Atlantic Division!

When the ACC split into a pair of divisions beginning with the 2005 season, each school was given a designated ‘rival’ from the other division. Georgia Tech’s designated rival was and remains Clemson. This means the Yellow Jackets and Tigers play each season despite occupying separate divisions. Take a look at what happens when instead of differentiating between intra and inter-division opponents, we look at annual and infrequent conference opponents. 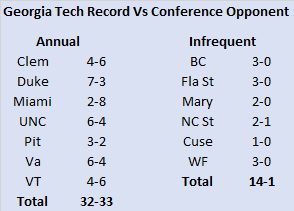 Once again, Georgia Tech is decidedly mediocre against ACC teams they play each season. However, their record against infrequent opponents surges to an amazing 14-1! Obviously, fifteen games is a relatively small sample, and with the expansion of the ACC to fourteen teams, the Yellow Jackets only play one infrequent conference opponent each season, but this does make some sense. Outside of the service academies and some downtrodden mid-majors, no other team has an offense like Georgia Tech’s. It would make logical sense that teams that play them on a regular basis would be more familiar with their style of play and better able to defend against it. To test this, let’s look at how many points per game the Yellow Jackets have traditionally scored against both types of teams. We’ll start with their annual ACC opponents.

The Yellow Jackets have scored right at about 28 points per game and have scored thirty or more points exactly thirty times in 65 games (about 46% of the time). Now, contrast that with how have they done against infrequent ACC opponents.

The Yellow Jackets have averaged about five and a half additional points per game against these opponents and have scored thirty or more points 60% of the time.

I neglected to include Georgia in the annual opponent table, in the interest of looking at solely ACC teams, but the Dogs' inclusion would serve to bolster my argument. The Yellow Jackets have averaged just 23.6 points per game in their ten games with Georgia, including just 21.2 points per game after scoring 45 in their initial meeting under Johnson.

So which ACC Atlantic team (besides Clemson) has the misfortune of facing Georgia Tech this season? Louisville has not faced Georgia Tech since joining the ACC in 2014. They get their turn this season on a short week with a Friday night home game. Georgia Tech will probably enter that game as a decent underdog (maybe a touchdown or so). Both teams play the Saturday before, so neither will have an advantage of additional off days, but the Yellow Jackets have a home scrimmage against Bowling Green while Louisville will be going for their third straight win over Florida State. I think the Yellow Jackets have a great shot at not only covering, but also moving their regular season record against Atlantic Division teams other than Clemson to 15-1.
Posted by matt at 3:21 AM