The Adjusted Pythagorean Record in the NFL Part II: Teams to Watch in 2019

Last week I reimagined one of my college football rating concepts, the Adjusted Pythagorean Record (APR), for professional football. At the end of the post, I offered a tease as to which teams might be poised for a rebound or due for some regression thanks their actual record differing significantly from their APR. I know you have been waiting with bated breath for that list of teams. But before we get to it, let’s look at the APR for the NFL as a whole in 2018. The following table ranks all 32 NFL teams according to their APR. Teams that qualified for the playoffs are highlighted. 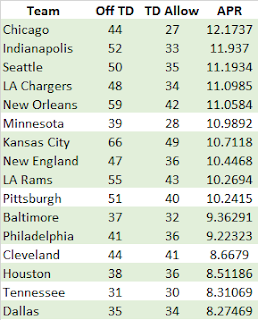 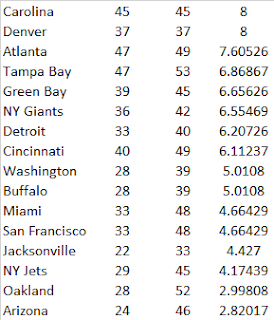 At worst, the APR did a quality job of identifying the best professional football teams in 2018. While, the two Super Bowl participants ranked relatively low (eighth and ninth respectively) by this metric, the twelve teams that made the playoffs all ranked in the top-fifteen. While Bears fans may be trudging through a long offseason reliving the double-doink that ended their first playoff appearance since 2010, they can take solace in the fact that they topped the APR charts. Peruse and dissect the ratings at your leisure (and let me know how they over or under rate your favorite team).

As you may recall from last week, more than three quarters of teams since 2002 have finished with a final record within two games of their APR. I decided to use that as a somewhat arbitrary threshold when accessing teams that significantly over or under-perform. Those teams that over-perform by at least two games tend to come back to earth the following season and those teams that under-perform tend to bounce back the following season. In 2018, five teams either over or under-performed by at least two games and should be strongly considered for regression or progression when prospecting their final records in 2019. They are listed below.

The NFL season is very short when compared to the other professional sports leagues. A few clutch plays or lucky bounces can drastically alter a team’s record. With that in mind, I tabulated three statistics that are at least somewhat random and can help explain why these teams over or under-performed. They are:
While these three statistics all involve a modicum of skill, they do not correlate well from year to year, but have a profound impact on a team’s record in a single season. The three teams that over-performed all did well in these metrics.

The Rams were triple crown contenders in these categories, posting a great record in close games, a fantastic turnover margin, and scoring five more non-offensive touchdowns than they allowed. Houston did not have a great close game record, but they had an even better turnover margin than the Rams and were nipping at their heels in non-offensive touchdown net. Miami was spectacular in close games (as they were for the totality of the Adam Gase regime). If you look closely at their final record, you will notice they did not win a single game by more than eight points. Now for the other side of the coin.

Denver was not exceptionally bad in close games, but their turnover margin and general poor coaching likely cost them a few victories. Minnesota’s Achilles heel was their propensity to allow teams to score against them in unconventional ways with Kirk Cousins contributing three pick sixes to the cause.

If you are an over/under win total enthusiast like myself, keep an eye on these five teams when placing your bets over the summer. Recent history indicates the trio of the Rams, Texans, and Dolphins might be in for a regression while the Broncos and Vikings could see their records improve in 2019.
Posted by matt at 3:30 AM