Two weeks ago we looked at how Conference USA teams fared in terms of yards per play. This week, we turn our attention to how the season played out in terms of the Adjusted Pythagorean Record, or APR. For an in-depth look at APR, click here. If you didn’t feel like clicking, here is the Reader’s Digest version. APR looks at how well a team scores and prevents touchdowns. Non-offensive touchdowns, field goals, extra points, and safeties are excluded. The ratio of offensive touchdowns to touchdowns allowed is converted into a winning percentage. Pretty simple actually.

Once again, here are the 2019 Conference USA standings. 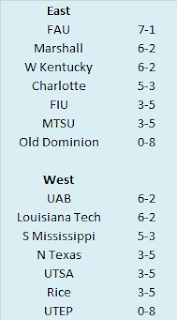 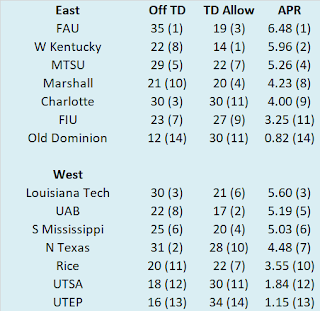 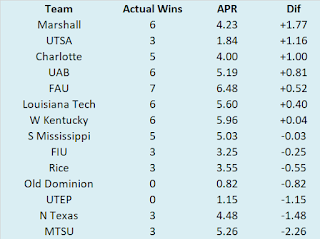 I use a game and a half as a line of demarcation to determine whether or not a team significantly over or under-performed relative to their APR and by that standard, Marshall was the only team that significantly exceeded their APR and Middle Tennessee was the only team that significantly under-performed relative to their APR. Marshall exceeded their expected record thanks to a 3-0 mark in one-score conference games. No real mystery there. And two weeks ago, we discussed a few reasons the Blue Raiders failed to follow up their division title with another postseason appearance. So let’s move to other matters.

From the Penthouse to the Outhouse
Much was expected from North Texas in 2019. The Mean Green were coming off back-to-back nine win seasons and three consecutive bowl appearances. They returned a senior quarterback who was already the leading passer in school history as well as their head coach, who nearly took the open Kansas State job. It wasn’t just Mean Green season ticket holders that expected big things either. North Texas was the preseason consensus to represent the West division of Conference USA in the league championship game. Alas, the Mean Green were not able to meet those expectations. They finished 4-8, their worst record yet under Seth Littrell. In the process, they became the 24th team since 2005 to finish with a losing regular season record despite being the preseason consensus division or conference favorite. I know that’s a mouthful, but by looking at those teams from the past, we can get an idea of what to expect from North Texas in 2020.

Instead of calculating how much each preseason consensus favorite that finished with a losing record improved or declined the next season and tallying up the results, I decided to divide the previous 23 teams into Power Five/BCS and Group of Five/non-BCS buckets. College football is a hierarchical sport. If a Power Five team like Southern Cal finishes with a losing record despite lofty preseason expectations (which they did in 2018) it is inherently different than if it happens to North Texas. Since North Texas is mid-major program, we’ll start by looking at other mid-major teams. Since 2005 (excluding North Texas in 2019), fifteen mid-majors have finished with a losing record despite being the preseason consensus favorite in their conference or division. Their results the next season are pretty mixed.

On average, the teams improved by a little less than one win in conference play and a little more than one win overall (regular season win totals only). However, that is the average. When it comes to actually improving, less than half improved in either conference or overall wins. In fact, just as many declined in overall wins as improved. When we look at major conference teams, the results are better, but the sample size is quite small (eight teams).

These teams improved by nearly two wins in conference play and more than two wins overall. Declining the next season was almost out of the question, with Kansas the lone team to continue to decline after their losing season. It makes intuitive sense that major conference programs could return to their previous heights faster than mid-major ones. There is an established food chain in college football, particularly at the top. These teams have more money and infrastructure as well as better recruits than their mid-major peers. Meanwhile, with a few exceptions, like Boise, Idaho, there is more parity at the lower rungs of FBS. The difference between North Texas and UAB or Southern Miss or Louisiana Tech is much less than the difference between Clemson and Louisville or NC State. The Mean Green have a much smaller margin of error than the Tigers. That being said, I still think North Texas is poised for a rebound in 2020. They probably shouldn’t be the division favorite again, but a return to the postseason should be expected. In addition, the lost 2019 campaign may allow them to hang onto their coach for a year or two longer than they otherwise would have.
Posted by matt at 3:18 AM