We stay out west this week where we review the Mountain West's big brother, the Pac-12.

Here are the Pac-12 standings. 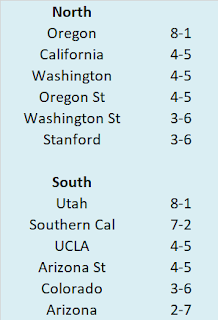 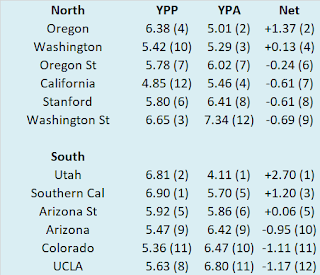 College football teams play either eight or nine conference games. Consequently, their record in such a small sample may not be indicative of their quality of play. A few fortuitous bounces here or there can be the difference between another ho-hum campaign or a special season. Randomness and other factors outside of our perception play a role in determining the standings. It would be fantastic if college football teams played 100 or even 1000 games. Then we could have a better idea about which teams were really the best. Alas, players would miss too much class time, their bodies would be battered beyond recognition, and I would never leave the couch. As it is, we have to make do with the handful of games teams do play. In those games, we can learn a lot from a team’s YPP. Since 2005, I have collected YPP data for every conference. I use conference games only because teams play such divergent non-conference schedules and the teams within a conference tend to be of similar quality. By running a regression analysis between a team’s Net YPP (the difference between their Yards Per Play and Yards Per Play Allowed) and their conference winning percentage, we can see if Net YPP is a decent predictor of a team’s record. Spoiler alert. It is. For the statistically inclined, the correlation coefficient between a team’s Net YPP in conference play and their conference record is around .66. Since Net YPP is a solid predictor of a team’s conference record, we can use it to identify which teams had a significant disparity between their conference record as predicted by Net YPP and their actual conference record. I used a difference of .200 between predicted and actual winning percentage as the threshold for ‘significant’. Why .200? It is a little arbitrary, but .200 corresponds to a difference of 1.6 games over an eight game conference schedule and 1.8 games over a nine game one. Over or under-performing by more than a game and a half in a small sample seems significant to me. In the 2019 season, which teams in the Pac-12 met this threshold? Here are Pac-12 teams sorted by performance over what would be expected from their Net YPP numbers. 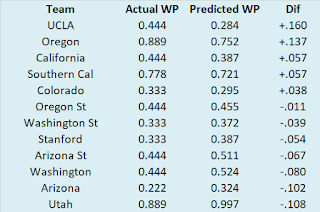 After reviewing the Mountain West, where the actual standings were quite different from the YPP and APR numbers, the Pac-12 represents a  return to normalcy. No team significantly over or under-performed relative to their YPP numbers. So lets move to something a little more interesting.

When David is Favored Over Goliath
Think back if you can to a different time. It was early December. The holidays were approaching, we were blindly ignorant to the calamity that was headed our way in 2020, and Utah was favored over Oregon in the Pac-12 Championship Game. The Utes were certainly formidable, boasting an 11-1 record heading into the game, with their lone defeat coming on a Friday night early in the season at Southern Cal. Ten of their eleven victories had come by at least eighteen points and their last three had all come by at least four touchdowns. Still, even a basic college football fan knew the Utes were not an elite recruiter like Alabama or Ohio State. Their baseline talent was in the middle of the pack for Power Five programs. They relied on coaching and development to achieve success more so than raw talent. Yet here they were, favored on a neutral field against a team that had played for two national titles the previous decade. Well, you know how things shook out. This got me to thinking, how often are programs with elite talent underdogs to teams without it and more importantly, how do they fare in that role? The next paragraph will go into detail about how I set about answering that question, so if you are pressed for time or have a short attention span, skip on down.

To identify the Goliaths (elite recruiters) in this study, I used the 247 Sports Talent Composite for the years 2015, 2016, 2017, 2018, and 2019. The talent composite uses the recruiting star ratings to give a numerical value to each FBS and FCS team. In 2019, the top team was Alabama with a rating of 984.96 and the lowest rated team was Bryant with a scant 6.30 talent rating. Instead of arbitrarily setting a threshold for what constituted an elite recruiter, I let math do the job for me. Initially I loaded all 130 FBS teams (for 2019) into an Excel spreadsheet and calculated the mean and standard deviation of their talent rating. I classified teams that were +2 standard deviations above average as uber-elite and those that were +1 standard deviation above average as elite. However, a few problems quickly surfaced. While there were only two or three uber-elite teams each season, there were close to 30 teams that qualified as elite. To me, this seemed like too many. Can nearly a quarter of FBS really be considered elite? I don't think so. Thus, I decided to only include Power Five teams (and Notre Dame) in the calculation. Each season there are a few of Group of Five teams that rank ahead of Power Five teams in talent rating (never more than five for any season from 2015 through 2019), but for the most part, FBS teams are segregated along those conference lines. Using only Power Five teams in the analysis yielded the same number of uber-elites, but cut the elites down to about twelve per season. Intuitively, this seems much more in line with how college football actually functions. So, once I had the teams classified as elite and uber-elite, I looked at instances where they entered a game as underdogs against teams in another grouping. In other words, I threw out games where two uber-elites were facing off because obviously one has to be favored (unless the line is a pick), where two elites were playing, where an uber-elite was favored against any team, or where an elite was favored against a non-elite. Confused? Here it is a little simpler. I looked at games where an uber-elite was an underdog (provided they weren't facing another uber-elite) and where an elite was an underdog (provided they were not playing an uber-elite or another elite). In addition to looking at instances of an elite or uber-elite being an underdog, I also categorized some of their underdogs roles as extreme. This included games where they were a three point or greater home underdog, a six point or greater neutral underdog, or a nine point or greater road underdog. Finally, I did not include bowl games in the analysis as those can be rather funky with motivation, players sitting out, and other numerous angles impacting the game.

With the methodology out of the way, I have provided a table listing teams that were either elite or uber-elite between 2015 and 2019 as well as the number of times they appeared in that category. I considered listing out the elite and uber-elite for each season, but thought that would be too messy. If you would like to see that table, hit me up and I can provide it for you. 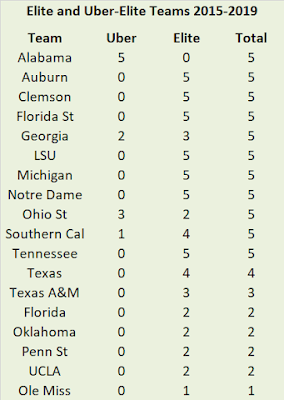 Eleven teams were either elite or uber-elite all five seasons: Alabama, Auburn, Clemson, Florida State, Georgia, LSU, Michigan, Notre Dame, Ohio State, Southern Cal, and ummmm Tennessee? Well, I'm sure you can spot the outlier. You may have noticed the team that prompted this analysis, Oregon, is nowhere to be seen. I thought they would have classified as elite for at least one season, but alas, the numbers never lie.

So how did these teams fare against the spread as underdogs? Surprisingly, not that well.

As you would probably have guessed, the uber-elites were rarely underdogs to teams not in their weight class. It only happened six times in the past five seasons and the underdogs were 3-3 ATS overall and 1-1 in the role of an extreme underdog. With a .500 ATS mark (in a very limited sample), they did fare better than the elites.

Elite teams covered just under 47% of the time when they were underdogs to the middle and lower classes of college football. In extreme situations, they covered at a similar rate (48%). I am actually a little shocked by these numbers. I expected that elite underdogs would be solid bets. For the past five seasons, that has not been the case.

Here are how the individual teams performed as underdogs. 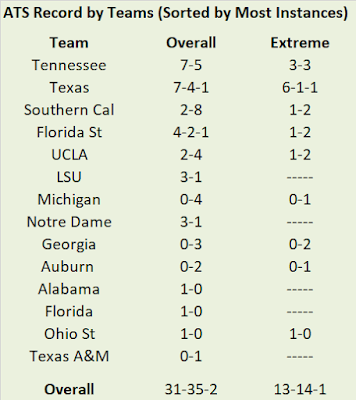 Southern Cal, Tennessee, and Texas (three historical programs suffering through down times) are the only teams that were underdogs a significant number of times over the past five seasons. Tennessee and Texas actually performed quite well in the role, but Southern Cal, yikes.

If you had bet against all these elite and uber-elite teams in all situations, you would have made a little money (52.4% is the break even point assuming -110 per bet), but that is hardly a significant advantage for this sample size. With the cover percentage of betting against elite underdogs hovering right around the break even line, this is not a trend I would recommend pursuing unless other aspects of your handicap identify an advantage. Oh well, I apologize for making you read all those words and not providing any type of gambling nugget. But, if you are patient, there might be something for you next week. In the business, I believe they call that a tease. See you next Thursday.
Posted by matt at 3:02 AM