First Half Point Differential Part I: An Introduction

The primary reason I started this blog nearly fifteen years ago was to make predictions. In that decade and a half, I have made a lot of them. Some good, and some not so good. In my never ending quest to make better predictions, I try to think of stats that can identify teams poised for positive and negative regression. My offseason posts on Yards per Play (YPP) and the Adjusted Pythagorean Record (APR) are two that I am quite proud of. I don't want to spoil the rest of the post, but I think I have found another: first half point differential.

So what is first half point differential (1HPD)? Unlike advanced stats, it is easy to define and calculate. It is simply the scoring margin (positive or negative) in the first half of a game. In the 2019 College Football National Championship Game, LSU led Clemson 28-17 at the half. The 1HPD for LSU was +11 and -11 for Clemson. Simple stuff. With more than ample time on my hands, I calculated the 1HPD for all FBS teams in conference play back to the first season of the College Football Playoff (2014). That is six seasons worth of data. What did that data show? I thought you would never ask.

For starters, 1HPD in conference play is positively correlated to a team's conference record. In fact, with an R squared value of .72, the correlation is stronger than YPP in conference play (which surprised me). So if 1HPD has a strong correlation with conference success, what happened to those teams that saw their expected record based on 1HPD differ significantly from their actual record? Wow, its like your reading my mind. 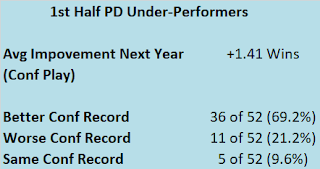 The average team improved by 1.41 wins in conference play and nearly 70% of the teams improved by at least one win.

On the other hand, the teams that exceeded their expected record more often than not declined the following season. 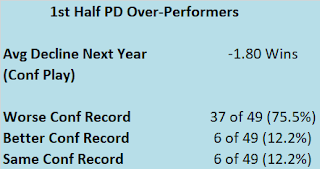 The average team won about 1.80 fewer games the next season and more than three quarters of the teams declined by at least one win.

It certainly appears 1HPD is a solid way to identify teams that might regress or rebound the next season. Intrepid readers might recall the title of this post and wonder what comes next. Well, next Thursday, I'll give you a rundown of the 1HPD for Group of 5 teams from 2019 and try to identify some teams to watch assuming we have a season in 2020. In two weeks, we'll look at the Power 5 and then in three weeks we'll see if 1HPD can be used to handicap conference title games and the College Football Playoff. Stay tuned!
Posted by matt at 4:27 AM