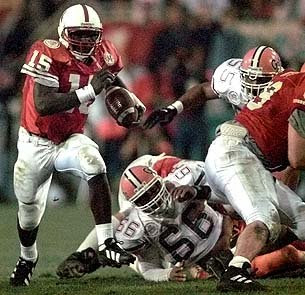 This is the first in a series of quasi-weekly pieces leading up to the beginning of the college football season where I analyze the SDPI of the two teams that played for the mythical national title in the days before the BCS (plus other contenders if there was controversy). Don't know what SDPI is? Click here for an answer. We'll begin with the 1995 season. The de facto national title game was played in the Fiesta Bowl between Nebraska and Florida. Come take a trip with me back to a simpler time; when games could end in ties, when Tom Osborne was patrolling the sidelines in Lincoln, and the Ol' Ball Coach was turning a weak-armed, balding quarterback into a Heisman Trophy candidate.

To say Nebraska dominated the Big 8 in 1995 would be an understatement. They beat every conference opponent by at least 23 points. They pitched two shutouts (Oklahoma and Missouri) and another team netted only a field goal (Kansas). They scored at least 37 points in every conference game and broke the 50-point barrier three times. Their offensive SDPI alone (2.01) would have won the league and their defensive SDPI (1.53) would have finished a close second. Still, the Big 8 was far from a one-team league in 1995. Kansas State, Colorado, and Kansas all finished the season ranked in the top-10. The Jayhawks' ranking was undeserved, with a non-conference slate that included Cincinnati (6-5), North Texas (2-9), TCU (6-5), and Houston (2-9) coupled with a combined drubbing of 82-10 at the hands of Nebraska and their arch-rivals in Manhattan, but Kansas State and Colorado were legitimate top-10 squads. The Big 8's four bowl teams won their bowl games by a combined score of 205-81 for an average margin of victory of 31 points, with no margin being less than 21.

Much like the Cornhuskers, Florida dominated their league in 1995. The Auburn Tigers hung within 11 points of the Gators, but that was the closest an SEC team came to knocking them off. The Gators were held below 30 points only twice (they scored 28 in back-to-back weeks against Mississippi and LSU). Over in the SEC West, it appears only the fourth best team in the division took the crown. The Hogs parlayed a 4-0 record in close conference games and a schedule devoid of Florida (Auburn and LSU faced the Gators) into an SEC Championship Game appearance. The Championship Game was fairly boaring as the Gators humbled the Hogs 34-3. Tennessee was the only other SEC school to finish in the top-10. Somehow they finished #2 in the polls despite losing to the Gators by 25 points. Florida's dominance, while still pronounced, was a notch below Nebraska's.

The Cornhuskers entered the game as a slight favorite over the Gators (most odds makers had them around three points). The Gators opened the game with a field goal and led 10-6 after the first quarter. That's when the onslaught began. Nebraska scored 29 points in the second quarter; two field goals, a safety, and three touchdowns if you're scoring at home. Incidentally, none of those touchdowns was scored by Tommie Frazier. He scored twice in the third though, one of which was the infamous 75-yard run where he looked to be toying with the defense. The vaunted Gator offense managed only two touchdowns all game. Their third touchdown came courtesy of a Reidel Anthony kickoff return late in the fourth quarter. All told, the Huskers rushed for 524 yards (199 by Frazier), sacked Florida quarterback Danny Wuerffel seven times, and picked off three passes in a 62-24 win.
Posted by matt at 6:05 AM