Winning the Close Ones 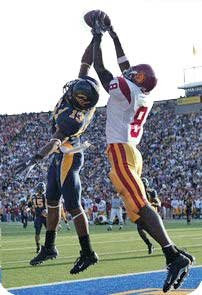 A team's record in close games is a topic I have examined several times here at Statistically Speaking. Not to beat an old horse, but the off-season is very long, so here's another look. If you want a refresher on the other findings regarding close games, you can read about them here, here, here, and here.

3rd down % also has a positive relationship with a team's record in close games. As a team improves it's conversion percentage it should see improvement in it's record in close games. However, this relationship is even weaker than the one for turnover margin. The r squared value of .025 is less than half that for turnover margin.

Field goal % has a positive relationship with a team's record in close games. This means as field goal percentage improves, a team's record in close games should also improve. However, this relationship is nearly non-existent. The r squared value is a paltry .009. How can something that seems so vital to a team's success in close games have no relationship? One need only look at the 2006 Florida Gators to devine an answer. The immediate thought that comes to mind when discussing field goal % and close games is that a team with a good kicker will win those games more often because of their kicker. What if they win those games more often in spite of their kicker. In 2006, Christ Hetland attempted all of Florida's 15 field goals. He made six of them (40%). In 2006, Florida played five close games and had a 5-0 record (discounting the Auburn game that was a ten point margin thanks to the games final play). In their one-point win over Tennessee, Hetland missed both his field goal attempts. In their seven-point win over Georgia, he was again 0 for 2. In their one-point win over South Carolina, he did manage to make one of his two attempts. In their seven-point win over Florida State he missed both his attempts. Even if he had made both against Tennessee, that game would have come down to the wire, but leaving points on the board against Georgia and Florida State made those games much closer than they should have been. Another make against South Carolina and it wouldn't have take a block party from Jarvis Moss and Ray McDonald to squeak out a win. Despite his best efforts, Chris Hetland failed to sabotage the Gators national title dreams.

None of the six team statistics examined here is highly adept at predicting a team's record in close games. This seems to be further proof that close games are nothing more than coin flips or crap shoots. However, something interesting does show up when you take a second look at the r squared values.

Both defensive statistics have a much stronger correlation (although still relatively weak) than any other statistic, especially the offensive statistics. This seems to reiterate a finding I posted about a year ago that good defensive teams tend to win more than their fair share of close games. Just some examples off the top of my head are Ohio State in 2002 and my beloved Demon Deacons in 2006.
Posted by matt at 8:30 PM