After running the SDPI numbers for all 11 conferences in 2006, I thought it would be an interesting sojourn through recent football history to look back at SDPI for the six BCS conferences throughout the entirety of the BCS era (98-06). It also gives me an excuse to add some pretty little graphs to the site. Don't know what SDPI is? Click here for an answer. Remember, its performance, not achievement, so years with the highest win totals may not actually be a certain team's best season. And its also only conference play, so any non-conference action, championship games, and bowl game are excluded. We'll continue with a look at the Big 10. After each team's graph, there is a paragraph of commentary followed by the number of first place SDPI finishes or if there are no such finishes, the highest SDPI finish. 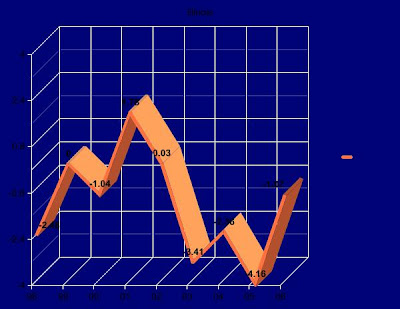 A pair of Ron's have guided the Illini through the duration of the BCS era: Turner for the first seven seasons and Zook for the last two. Under Turner, the program saw both the highs (a conference title in 2001) and the lows (two combined Big 10 wins in his final two seasons). In Zook's first season, the program dipped to its lowest point--over four standard deviations below average with a winless Big 10 season in 2005, but improved substantially with an influx of talent in 2006 and are a team to be wary of entering 2007. 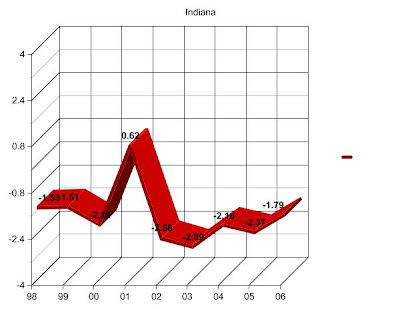 Cam Cameron is responsible for the first four seasons, Gerry DiNardo the middle three, and Terry Hoeppner the last two. Cameron's teams were generally pretty pathetic up until 2001 (Antwaan Randle El's senior season), when the Hoosiers were actually quite solid and with a little luck could have gone bowling. The Hoosiers were 4-4 in conference play and 5-6 overall, but with a little better non-conference scheduling (they lost to NC State and Utah who were a combined 15-9) and some fortuitous bounces (they lost to Utah by two points) could easily have finished 6-5 or 7-4 and saved Cameron's job. I guess things have worked out for Mr. Cameron though. Cameron was replaced by former Vanderbilt and LSU coach Gerry DiNardo. In DiNardo's first two seasons, the Hoosiers went 3-9 and 2-10 respectively (1-7 in conference play both seasons), but things appeared to be looking up as 2004 opened. The Hoosiers destroyed Central Michigan 41-10 in their first game and pulled off one of the biggest shockers of the season when they ended Oregon's 21-game home winning streak against non-conference opponents (dating back to 1994). Looking back, it's easy to see why Indiana won, and it has a lot more to do with what the Ducks did--almost any team with a competent Division IA (especially BCS) caliber team would have beaten Oregon that day. The next week, the Hoosiers lost by 29 points to a Kentucky team that would finish 2-9. The Hoosiers won only once more on the season and that was the end of the line for DiNardo. His replacement Terry Hoeppner has led the Hoosiers to nine wins in two seasons and many feel Indiana has the look of a team on the rise. I don't but it. SDPI sees them as improving slightly, but mostly treading water in Hoeppner's first two seasons. The Hoosiers four Big 10 wins under his guidance (against 12 defeats) have come against teams with a cumulative record of 14-34. The Hoosiers have also lost to a IAA school and beaten another by just four points. While I have been wrong at least once before, don't bet on the Hoosiers finding their way into a bowl game this season. 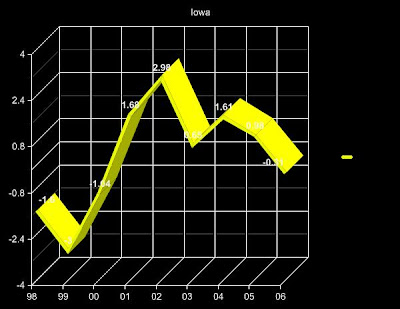 1998 was the end of the Hayden Fry era. What a fantastic 20 years it was. Three Big 10 titles, 14 bowl games, and 143 wins are the highlights. He was succeeded by Kirk Ferentz, who has guided the Hawkeyes ever since. The Hawkeyes bottomed out in Ferentz's first season, going winless in conference play and finishing in the SDPI cellar as well. His teams steadily improved over the next three seasons culminating in an undefeated Big 10 season and Orange Bowl appearance in 2002. Looking closely at the 2001 team that finished only 7-5, their sudden jump to conference champion is not totally surprising. They outscored their opponents by 133 points and were a tough luck 2-4 in close games. In 2002, they returned the core of their team and improved in the luck department (3-1 in close games) enabling them to share the conference title. Since that 2002 season, the Hawkeyes have remained a contender in the Big 10 (even sharing another conference title and winning the SDPI crown in 2004). They dipped a bit in 2006, finishing 6-7 overall (2-6 in the Big 10), but were much better than their conference record (6th in conference SDPI). If they can find a suitable replacement for Andrew Tate at quarterback, they area a real darkhorse team in 2007. 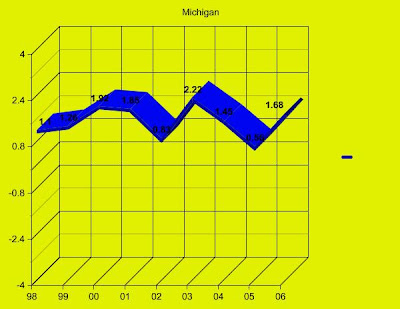 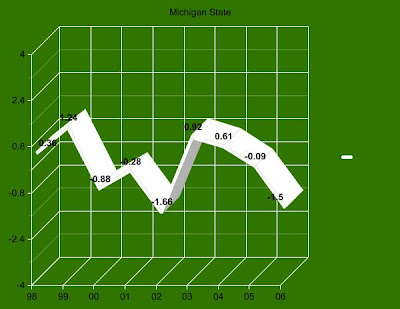 1998 was Nick Saban's final year in East Lansing, followed by four years of Bobby Williams and four years of John L. Smith. Saban's final team was a pretty pedestrian 4-4 in the Big 10 and 6-6 overall. However, they did ruin the national titles dreams of Ohio State on a cool November evening in Columbus, knocking off the Buckeyes 28-24. That was the only blemish on the the Buckeyes' record as they would win every other game by at least 10 points. Saban departed after the season, but the cupboard was stocked for his successor Bobby Williams. The Spartans ascended in 1999, winning 10 games and vying for the conference title. They regressed in 2000, rebounded a bit in 2001, and regressed some more in 2002. Seeking some stability, and not more up-and-down seasons, the Spartans replaced Williams with Louisville coach John L. Smith. As this video and this snippet show, Smith was anything but stable during his stint as head coach. Like Williams, Smith also peaked in his first season as coach and from then on his teams declined steadily exploded spectacularly. To be fair though, Smith will always have at least one game he remembers fondly. 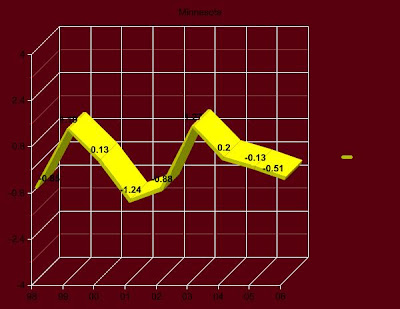 Glen Mason has been the only coach Minnesota has known during the BCS era, joining the Gophers in 1997. That will all change in 2007 as Tim Brewster takes over the program. Mason did a commendable job at Minnesota (to go along with his solid performances at Kansas and Kent State) taking the Gophers to seven bowl games in ten seasons. His teams were occasionally good, always competitive, and never great nor terrible. He could have done a lot worse. The Gophers do have tradition (six national titles--the last coming in 1960), but they don't really have recent tradition so Mason should not be fustigated for failing to turn Minnesota into Ohio State. Tim Brewster has a long way to go to come close to equaling his predecessor.
Does the dome make a difference?
Minnesota's Home Conference Record (98-06): 19-17 (.528)
Minnesota's Road Conference Record (98-06): 12-24 (.333). 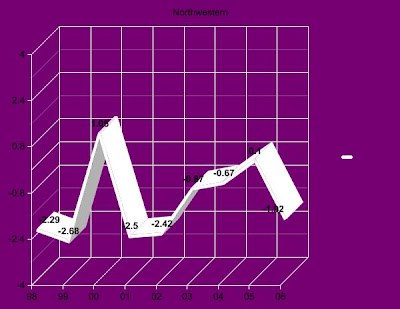 1998 was Gary Barnett's swan song in Evanston. Randy Walker was the head coach from 1999 through 2005 and Pat Fitzgerald just finished his first season as head coach. Barnett's final season was pretty bad, as was Walker's first season. Then just like they had done half a decade before, Northwestern had an inexplicably good season in 2000 (tying for the Big 10 title). The Wildcats struggled through two more down seasons before beginning a three-year run of improvement that culminated with a bowl big in 2005. The team regressed in 2006 partly because the 2005 team was quite lucky (4-1 in close games) and partly because of a sudden, tragic death. 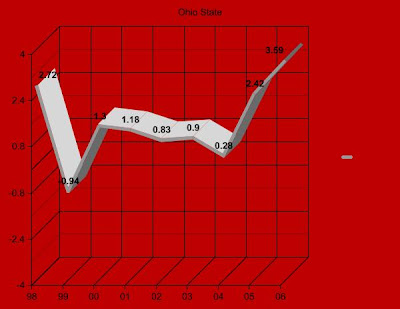 John Cooper is responsible for the first three seasons and Jim Tressel the last six. Looking back, its clear the Buckeyes made a good choice in hiring Tressel, but its clear if Cooper was to be fired, it should have been after the 1999 season. Ironically, Ohio State's national championship team has the second lowest conference SDPI of Tressel's six season. The reason for this is the 2002 team's incredible lack of dominance. They amazingly won seven of their 14 games by seven points or less. Luckeyes would be a more apropos name. 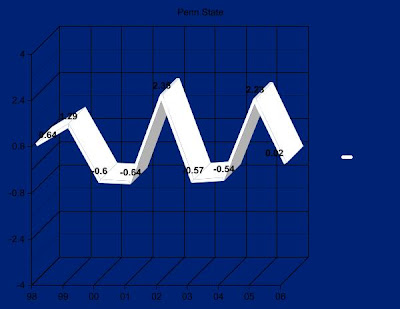 Joe Pa has led the Penn State program since 1966. In the BCS era, his teams have occasionally had a tough go of it. His Nittany Lions have been below average four times in nine seasons. However, in those four seasons, they were never really terrible. They were 4-4 in conference play in both 2000 and 2001, but failed to qualify for a bowl game either season thanks to a non-conference schedule that included games against Toledo (10-1) and at Pitt (7-5) in 2000 and a home date with eventual national champion Miami (12-0) and a trip to Virginia to close 2001. If they had played more Louisiana-Monroe's or Middle Tennessee's, instead of those challenging non-conference games their bowl streak would not have been interrupted. Until 2003 and 2004 when they were a combined 3-13 in conference games. However, that record is deflated by a 1-6 record in close conference games over those two seasons. A little better luck, and the Nittany Lions would have been a middle-of-the-pack team and not a cellar dweller. 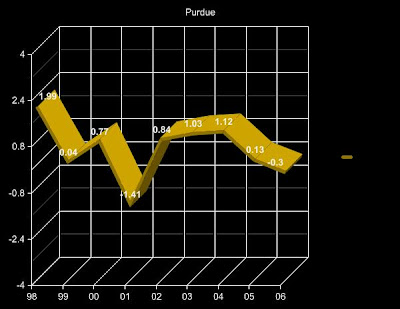 Joe Tiller and his spread offense have revived the Purdue program since arriving in West Lafayette from Wyoming in 1997. Amazingly, Purdue has been below average only twice in the BCS era. Not bad for a program that had not posted a winning record in the twelve previous seasons before is arrival. Here's an interesting fact I stumbled upon while examining Purdue's performance under Tiller, and another point in the entry into the vagaries of winning close games. In Tiller's first five seasons (97-01) his teams posted a 14-11 (.560) record in close games. That solid record in close games, especially in 2000 (3-2 overall and 3-1 in conference play) helped the Boilers win a Big 10 title. In his five most recent seasons, his teams have compiled a 13-17 (.433) record in close games. Included in than span are the 2002 and 2004 seasons when Purdue went a combined 5-11 (4-8 in conference play) in close games. Despite being one of the better teams in the Big 10 both seasons, the Boilers only managed to go 14-11 overall (8-8 in the Big 10). 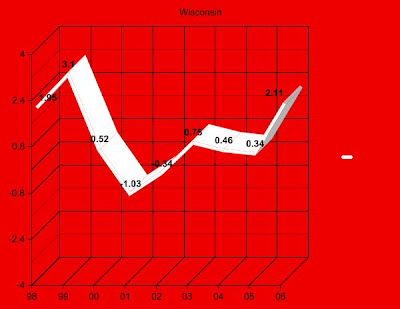 Occasionally great, usually solid, rarely bad. That's been the modus operandi for the Badgers, first under Barry Alvarez and then under Bret Bielema. The Badgers only legitimately poor season came in 2001. They did finish below average and 2-6 in Big 10 play in 2002, but that was primarily due to a 1-4 record in close conference games.

This is neat stuff. Is there any way to get the underlying data or can you provide the data source?

It has historical college football standings as well as points scored and allowed in confrence play and overall. I just plug those numbers into excel and compute the means and standard deviations for each conference for a particular season. Then its just a matter of seeing how many standard deviations each team is away from the mean.