After running the SDPI numbers for all 11 conferences in 2006, I thought it would be an interesting sojourn through recent football history to look back at SDPI for the six BCS conferences throughout the entirety of the BCS era (98-06). It also gives me an excuse to add some pretty little graphs to the site. Don't know what SDPI is? Click here for an answer. Remember, its performance, not achievement, so years with the highest win totals may not actually be a certain team's best season. And its also only conference play, so any non-conference action, championship games, and bowl game are excluded. We'll continue with a look at the Big 12. After each team's graph, there is a paragraph of commentary followed by the number of first place SDPI finishes or if there are no such finishes, the highest SDPI finish. 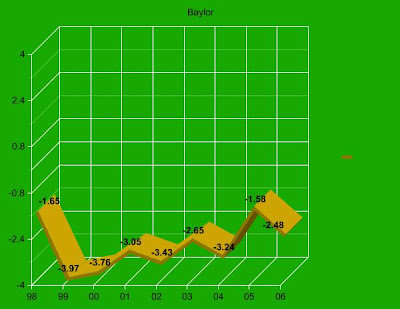 It has not been a pretty run in the Big 12 for the Bears. In fact there have been very few bright spots since Grant Teaff left in 1992. In the BCS era, Dave Roberts (1998) begot Kevin Steele (1999-2002) who begot Guy Morriss (2003-current). The Bears have finished last in SDPI five times in nine seasons and second to last three more times. Morris has done an admirable job, nearly getting Baylor to bowl-eligibility in 2005, but even then they finished ahead of only a rebuilding Oklahoma State team in the SDPI rankings. 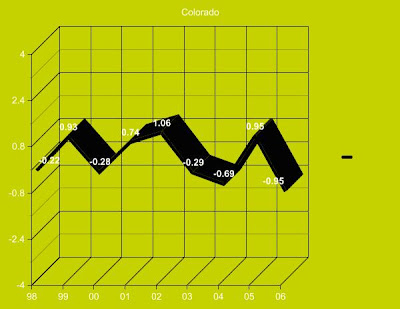 Whether or not you agree with the decision to fire Gary Barnett based on his misogyny, general douche-baggary, ridiculous play calls, or lack of institutional control, its pretty clear the program was slipping under his watch. His four Big 12 North Division titles in five years have more to do with luck (SDPI ranks Colorado behind Nebraska in 2001, Kansas State in 2002 and Iowa State in 2005) and a supreme concentration of power in the Big 12 South (4-4 won the North Division in 2004 and 5-3 turned the trick in 2005) than any football Renaissance in Boulder. After a disappointing first year under Dan Hawkins, look for the Buffs to rebound in 2007. 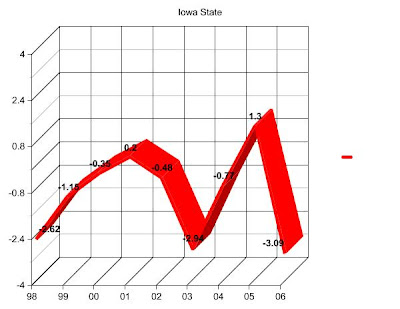 The Cyclones have certainly run the gamut in the Dan McCarney era, finishing last three times, but also as high as second. If the Cyclones manage to permanently turn the corner under Gene Chizik, hopefully McCarney's contributions will still be remembered. It's unfortunate the Cyclones happened to have terrible luck during their best season. In 2005, they were the second best team in the Big 12, but thanks to an 0-3 record in close conference games, the Cyclones only managed a 4-4 conference record and missed out on a date in the Big 12 Championship Game. 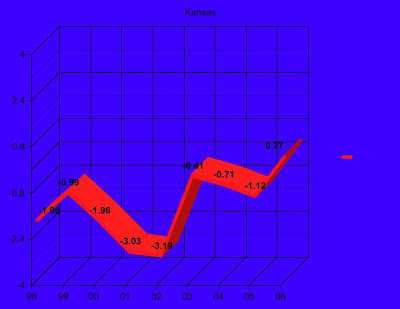 After Glenn Mason's departure in the mid-1990's, Jayhawk football was more or less something to kill time before hoops season began. While Jayhawk football will certainly never attain the level of popularity the basketball team enjoys (heck, the inventor of the game coached there), it has seen distinct improvement in the five seasons Mark Mangino has been on the job. What he may lack in aesthetics, he has more than made up for in on-field performance. In fact, the Jayhawks just enjoyed their best season in the Big 12 in the BCS era. Don't be shocked if they are even better in 2007. 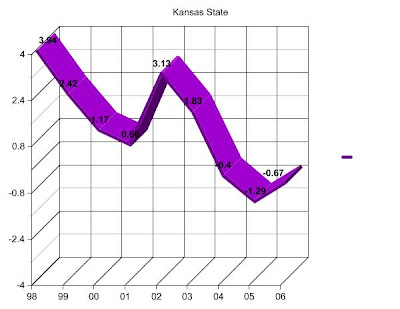 With my unabashed man-crush on Bill Snyder, it was good to relive the glory days of the Kansas State program in the late 1990's. For more on my infatuation click here. Clearly though, the program had slipped in his last few seasons at the helm. Ron Prince arrived in 2006 and the team promptly improved--slightly. The slight uptick in performance belies their rather large improvement in achievement (from two Big 12 wins to four). Keep that in mind when prospecting forward to 2007. 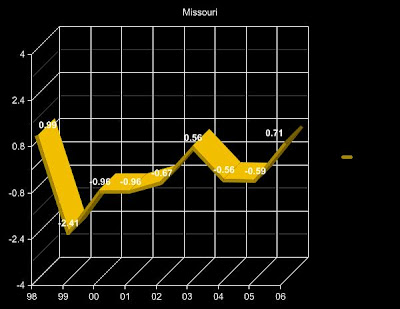 Larry Smith is responsible for the first three seasons (1998-2000) and Gary Pinkel the last six. Smith guided the Tigers to their best season in the BCS era in 1998. Unfortunately, Mr. Smith lost a ton of talent to graduation following the 1998 season (including Corby Jones--a great college quarterback) and the Tigers won only one conference game in 1999. After another down season in 2000, Smith was canned and Pinkel was tabbed to replace him. Pinkel had previously coached at Toledo where he guided the Rockets to an undefeated season in 1995. In his six seasons at Missouri, the Tigers have been neither great nor terrible. That may change in 2007 as Pinkel probably has his best team yet at Missouri. 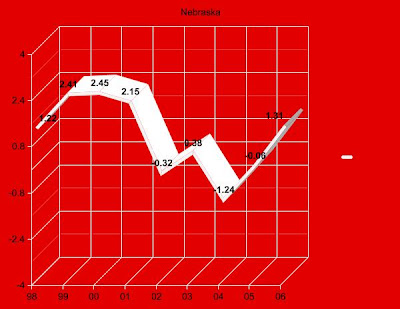 Frank Solich kept the Huskers near the top of the college football world (though not quite the heights reached under Tom Osborne) for four seasons. The wheels came off in 2002, but Solich seemed to reverse the teams trajectory in 2003 before being fired despite a 10-3 record. Bill Callahan took over in 2005 and promptly guided the Huskers to their first losing season since 1961. The Huskers improved and were an average team in 2005. They improved yet again in 2006 and may be on their way to recovering their place in the Big 12 pecking order. 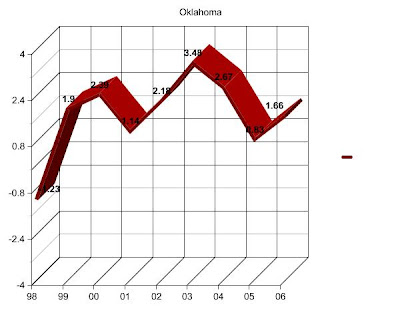 To Sooners' fans, Bob Stoops is the reason God made Oklahoma. Since mercifully ending the John Blake era following the 1998 season, Oklahoma has been at least one standard deviation better than their average conference brethren seven times in eight seasons. 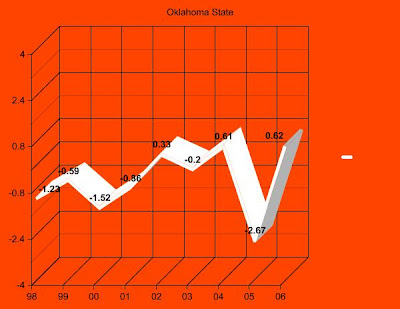 Bob Simmons is the coach for the first three seasons shown here, Les Miles the next four, and Mike Gundy the final two. After taking the Pokes to the Alamo Bowl in 1998, Simmons could not muster more than three conference wins in any of the three succeeding seasons. Once Miles came on board, the team immediately improved. Although they didn't qualify for a bowl game in his first season (2001) they did knock off their arch-rivals in Norman and end their national title aspirations. Following three consecutive bowl seasons, Miles left for the greener pastures of LSU and handed the reigns to Mike Gundy. In his first season, it appeared as if Gundy was pissing away all the progress made under Miles as the Pokes were the worst team in the Big 12 in 2005. Gundy and the Pokes bounced back in 2006, giving more credence to the notion that patience is crucial. Look out for the Pokes as a sleeper in the Big 12 South this season. 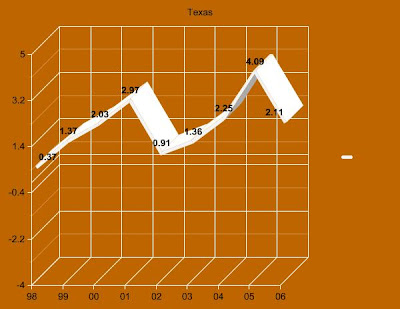 Mack Brown is responsible for every season shown here. He came to Austin from Chapel Hill prior to the 1998 season, replacing John Mackovic after a disappointing 4-7 campaign in 1997. The graph shows an interesting pattern for Brown's Texas teams. His teams appear to peak over a four-year period, peaking in the fourth season, and then falling off a bit the following season. Be on the lookout for another Longhorn national title in 2009. 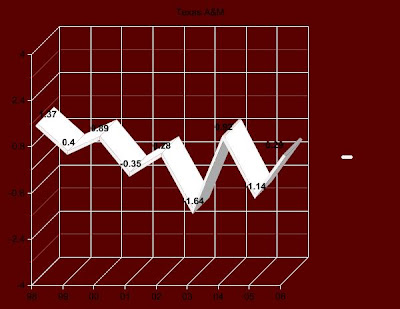 RC Slocum is responsible for the first five seasons and Dennis Franchione the last four. After participating in and winning the Big 12 Championship Game in 1998, Slocum's Aggies fell off a bit, but were still a solid Big 12 team; finishing below average only once. The decline is partly due to the resurrection of Big 12 South powers Texas and Oklahoma. Since the Aggies hired coach Fran to revive the program, he has yet to enjoy the heights reached by Slocum and has had two dreadful seasons in College Station. Maybe it wasn't such a good idea to hire a coach whose got a lot of leavin' left to do. 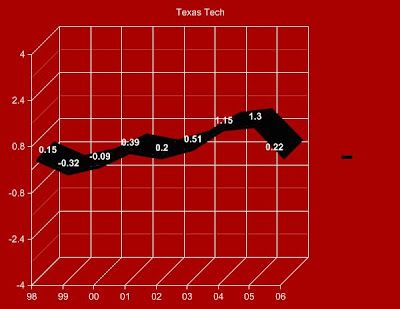 Spike Dykes is responsible for the first two seasons and Mike Leach the last seven. Dykes had a good 13-year run in Lubbock, taking the Red Raiders to six bowl games (he coached the Red Raiders in seven because he took over prior to the Independence Bowl in 1986) before his ouster following the 1999 season. While he may not get the accolades a certain other money-sport coach in Lubbock enjoys, Leach has done a terrific job. The Red Raiders have won at least seven games each season, been above average in regards to SDPI every year save Leach's first, and steadily improved, peaking in 2004 and 2005. In addition, Leach has also led the Raiders to some memorable bowl wins: the dismantling of Clemson in 2002, the upset of a 10-win Cal team in 2004, and the improbable comeback against Minnesota in 2006.