After running the SDPI numbers for all 11 conferences in 2006, I thought it would be an interesting sojourn through recent football history to look back at SDPI for the six BCS conferences throughout the entirety of the BCS era (98-06). It also gives me an excuse to add some pretty little graphs to the site. Don't know what SDPI is? Click here for an answer. Remember, its performance, not achievement, so years with the highest win totals may not actually be a certain team's best season. And its also only conference play, so any non-conference action, championship games, and bowl game are excluded. We'll continue with a look at the Pac-10. After each team's graph, there is a paragraph of commentary followed by the number of first place SDPI finishes or if there are no such finishes, the highest SDPI finish. 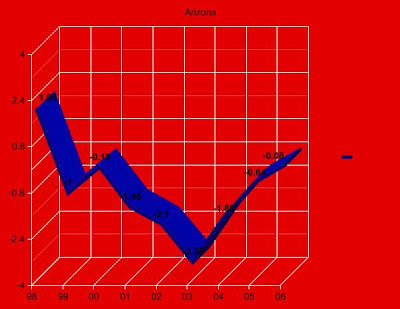 Dick Tomey is responsible for the years 1998-2000. 2001-2003 was the John Mackovic disaster, and since 2004 Mike Stoops has been in charge. The BCS era began quite well for Arizona as the Wildcats finished 1998 with a 12-1 record. They slipped to 6-6 and 5-6 the next two seasons (3-5 in Pac-10 play both years) and Dick Tomey was let go. Nevermind his track record of consistent success at Hawaii and Arizona. In came John Mackovic, who proceeded to win a grand total of four conference games in his three seasons. Next up was Mike Stoops who has steadily improved the program each season and now has the Wildcats back to mediocrity. Of course, that's where they were six years ago when Tomey was let go. While the Wildcats have been wandering through the desert in search of the promised land, Tomey has gone on to resurrect his third moribund program, this time at San Jose State. 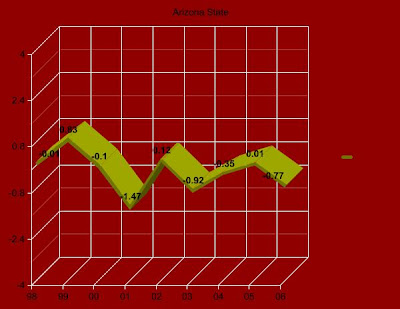 Bruce Snyder is responsible for the first three seasons and Dirk Koetter the last six. In all nine seasons, the Sun Devils have been neither very good, nor very bad. Ironically, even in their 9-3 season (5-3 in Pac-10 play), the Sun Devils were outscored by their conference opponents. Primarily because in two of their three conference losses, they were outscored by a combined 72-7 (by Southern Cal and Cal). 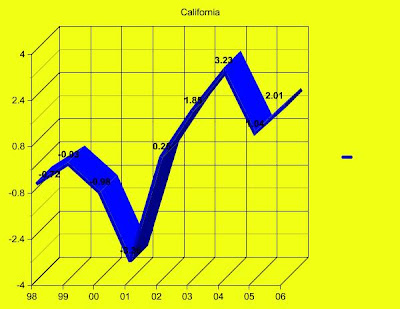 From zero to respectability in...Jeff Tedford. The combined size and swiftness of the turnaround make it one of the most impressive in college football history. In 2001, Cal was awful--1-10 overall and 0-8 in Pac-10 play. They were a legitimate 0-8 too. They were over three standard deviations below average in conference play. The 9th place team (Arizona) was only about one and a half standard deviations below average. The next season, Cal was 7-5 (4-4) in conference play and had an above average SDPI. Two years later, Cal was the best team in the Pac-10. They have remained near the top of the standings since. They have not finished worse than third in SDPI since Tedford's first season (a pair of second place finishes, and a bronze medal to go along with the first and fourth place finishes previously mentioned). 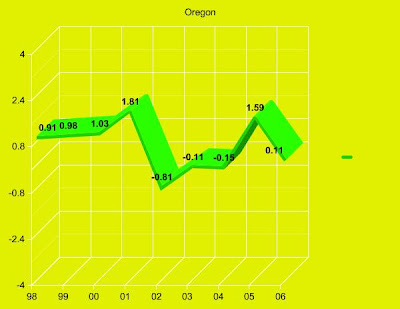 Mike Bellotti has been the head man for the duration of the BCS era for Oregon (he took over for Rich Brooks in 1995). The Ducks are the only member of the old guard (Pac-10 powers in the late 1990's and early 2000's) to compete for conference titles in the latter part of this decade. Neither Washington, Stanford, nor Arizona have finished higher than fourth in SDPI since 2001. After winning the Pac-10 and nearly playing for the national title in 2001, the Ducks went into a mini-three-year swoon where they were below average (but not terrible each season). They rebounded in 2005 and finished second in the Pac-10 standings and in SDPI despite the loss of quarterback Kellen Clemens. They regressed back to about average in 2006, but remain a threat in the Pac-10. 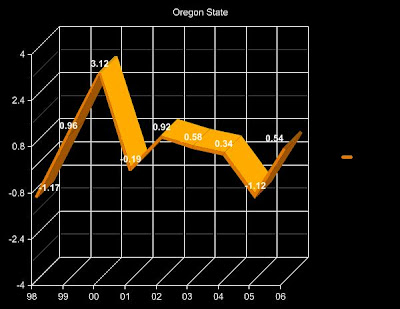 Four years are of Dennis Erickson are sandwiched between one year of Mike Riley and four years of...Mike Riley. When Riley left for the NFL after a successful (by Oregon State standards) 5-6 season in 1998, he was replaced by Dennis Erickson. Under Erickson, the program reached unimaginable heights, winning the schools first conference championship (tie) since 1964 in 2000, and coming within three points of an undefeated regular season. When Erickson left for the NFL following the 2002 season, Riley was immediately welcomed back. Since taking over for Erickson, Riley has consistently fielded solid teams (the Beavers have been above average three out of his five seasons), but has yet to return the program to the heights reached under Erickson. However, even a quick glance at the above graph reveals Oregon State's historic 2000 season was an outlier in Erickson's tenure as they were never more than one standard deviation above average during his other three seasons at the school. Riley's winning percentage at Oregon State is a rather pedestrian .528 (38-34). However, besides Erickson, he is the only Oregon State coach to have a winning record at the school since Tommy Protho. The other five coaches (excluding Erickson) who preceded him had a combined winning percentage of .282 (95-247-7). 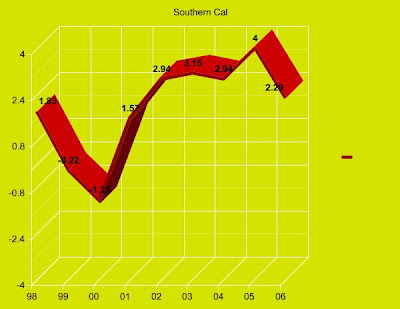 Since taking over for Paul Hackett in 2001, Pete Carroll has certainly awoken the sleeping giant that was Trojan football. Southern Cal did win or share six Pac-10 championships between 1980 and 2000, a number almost any other program would be more than happy with. However, in his six seasons, Carroll has won or shared five Pac-10 titles (five in a row). While the Trojans managed just a 6-6 record in Carroll's inaugural season, his team outscored it's opponents by 91 points and had a Pythagorean Record of 8.44-3.56. They were beset by a 2-5 record in close games (decided by seven points or less) and were actually the second best team in the conference behind Oregon. If I had been calculating SDPI five years ago, maybe their rise wouldn't have been so shocking. 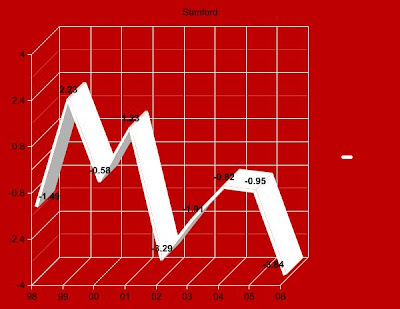 While Tyrone Willingham may have been a bad fit for Notre Dame, anyone who questions his coaching acumen need only look at what has happened to Stanford when he departed after the 2001 season. Since his departure, the Cardinal have gone 10-30 in Pac-10 play and not had an SDPI finish better than -0.82. In Willingham's four seasons featured in this analysis (he was actually there for three additional seasons not included here), his teams went 19-13 in conference play with two seasons where his teams were more than one standard deviation above average. Oh and he won a Pac-10 and SDPI title in 1999. 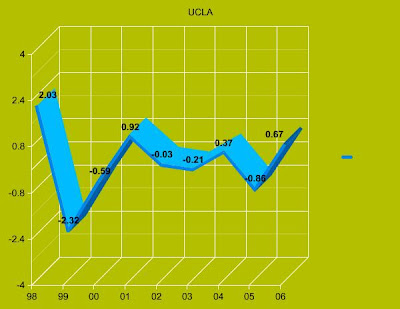 Bob Toledo is responsible for the first five seasons and Karl Dorrell the last four. Besides the first two seasons, when UCLA was one of the best and then one of the worst teams in the Pac-10, they have been consistently about average the past seven seasons. During those seven years, they have gone 30-27 in conference play and have finished 4-4 four times and 5-4 once. Interestingly, in their best season record-wise in that span (2005) when they were 10-2 (6-2 in Pac-10 play), they were actually outscored in conference play and had a negative SDPI. Not surprisingly, the team improved its performance in 2006, but its record declined. 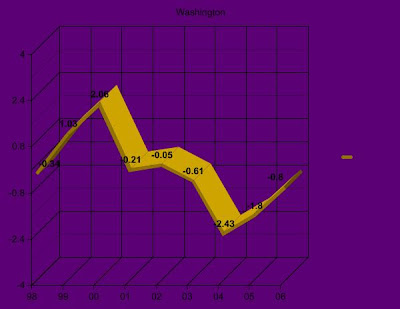 After beginning the new decade with a fantastic season, culminating with a Rose Bowl win over an over matched Purdue team, the Huskies have finished below average every season in Pac-10 play since. That Huskie team also delivered Miami it's only loss over a 40-game span. If not for their five-point win over the Canes in September of 2000, Miami could have conceivably been aiming for its 3rd consecutive national title in the 2002 Fiesta Bowl. Say what you will about Rick Neuheisel and his knowledge (or lack thereof) of gambling on amateur events, but the man was the glue holding the Huskies together. Since his departure, the Huskies have gone from mediocre to terrible. Things may be changing though, as Tyrone Willingham's teams have shown improvements in each of his two seasons on the job. 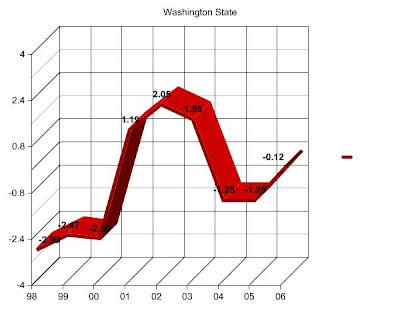 This graph begins in 1998, the season after Washington State's surprising run to the Rose Bowl behind Ryan Leaf. The Cougars would suffer through three straight desolate seasons (three consecutive cellar SDPI finishes and a 3-21 conference record) before rebounding in 2001. This time the Cougars were quarterbacked by Jason Gesser. Although he went undrafted, his pro career was probably marginally better than Leaf's. Head coach Mike Price left for Alabama following the 2002 season (when the Cougs actually won the conference tiebreaker over Southern Cal). He famously never got to coach a game for the Tide. He was replaced by Bill Doba. Washington State remained strong in 2003 before falling off in 2004. They improved in 2006 and were approaching an average team. 2007 will go a long way in determining the fortunes of both Doba and the Washington State program. The seat couldn't be much warmer.