In Case You Missed It: Week 4 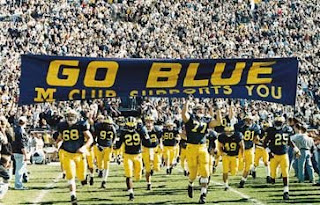 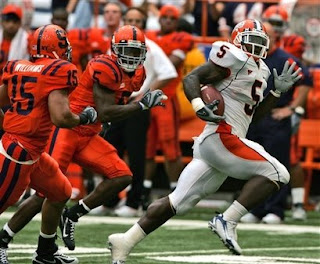 ...Illinois. The Illini, led by running back Rashard Mendenhall have nearly as many wins this season (3) as they had in Ron Zook's first two seasons. After rushing for only 33 yards on 11 carries in the opening 6 point loss to Missouri, Mendenhall has surpassed 100 yards every week, and actually crossed the double-century mark against Indiana this past week. He also has 8 touchdowns in only 4 games after scoring 8 in his first two seasons.

...Talk about pulling one out of the fire. Trailing 24-3 last in the third quarter, my Demon Deacons looked all but finished with Maryland inside out 5-yard line. One ill-advised pass later and the score is 24-10 and the stage is set for an improbable comeback. Alphonso Smith deserves a ton of credit for making the play and scoring the momentum-shifting touchdown, but this loss sits squarely on the bell of Ralph Friedgen. Inside the 5, with a 21-point lead, with a first-year starter at quarterback, all it takes is a few runs up the middle and s short field goal (at worst) to put the game away. Instead, one pass play shifts the course of the game and possibly the season for two teams. But before I declare the season saved for Wake, we must get better play from the quarterback position. Last season Riley Skinner was a big reason for the Deacon's success, manage the game (I hate that phrase) and throwing only 5 interceptions in 260 pass attempts. This season Skinner has already thrown 6 interceptions (3 on Saturday) in only 72 pass attempts. 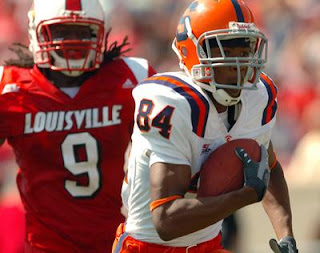 ...Did Bobby Petrino take the defense with him to the Atlanta Falcons? After giving up only 16.3 points per game last year, the Cardinals are allowing their opponents to score 32.5 points per game. Against Division IA teams that number is 40 per game.

...Yes the scoreboard finally looked good, but Auburn didn't exactly dominate New Mexico State. The Tigers outgained the Aggies by only 43 yards (422-379) and won primarily (here's an old refrain) thanks to their defense. The going gets a lot tougher against Florida this weekend.

...Time to congratulate a couple of teams that I figured would be in for long years. The Connecticut Huskies and Kentucky Wildcats are both 4-0. The Huskies have matched their win total from last season, and while anything less than 3-1 at this point would have to be deemed a failure (Duke, Maine and Temple were the first three teams on the schedule), 4 wins and a good shot at 5 (Akron up next) in September is cause for celebration. Be careful about anointing the Huskies a Big East sleeper though. As mentioned earlier, their schedule has been pretty soft, and in their biggest win thus far, a 34-14 decision over Pitt, the Huskies were outgained, but benefited from 6 Panther turnovers. Kentucky on the other hand, has been a touch more impressive, especially in their last two games against Louisville and Arkansas (although that first win just lost a little luster). After facing Florida Atlantic this weekend, the schedule really heats up with only SEC games left. A bowl game is still no guarantee, even with a 5-0 start, as the Cats must face every team in the SEC East to go along with LSU and Mississippi State. 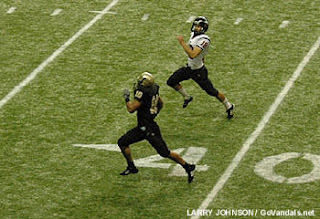 ...In an otherwise uninteresting game between two teams with a combined one win, Northern Ilinois' trip to Idaho did produce some enchanting moments in the Kibbie Dome. Down 35-7 (after 3 defensive touchdowns by Northern Illinois), Shiloh Keo returned a punt 100 yards for a touchdown to get the Vandals within 3 touchdowns at the half. The Vandals nearly came all the way back before falling 42-35. So much for not fielding punts inside your own 10-yard line. 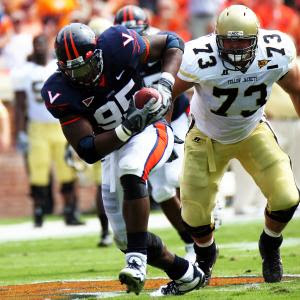 ...Left for dead three weeks ago after a humiliating loss to Wyoming, the Virginia Cavaliers are now 3-0 in the ACC. Two of those wins have been in doubt until the final minutes, the other was against Duke, and Virginia has still been outscored on the season so our old friend regression may yet get the Cavs, but 3-0 is 3-0. The Cavs still have 3 conference games against what looks like the weakest teams in the Atlantic Division (@Maryland, @NC State, and versus Wake Forest). Coupe that with the fact that Miami and Virginia Tech do not appear to be as dominant as they have been in past years, and well why can't the Cavs dream?

...Finally, I'm gonna go out on a limb and do some serious extrapolation, but bear with me. Central Florida whipped what I believed was one of the best teams in Conference USA coming into the season (Memphis) 56-20 on Saturday. The Knights have 9 more games (10 more counting the Conference USA Championship Game), so this is a long way off, but what if...The Knights win out? Their only loss thus far has been by 3 points to Texas. The two non-conference games they have left are against Louisiana-Lafayette and South Florida. The game against the Ragin' Cajuns is not a resume builder, but a win over a South Florida team that finishes with 8 or 9 wins could give them a boost. Winning out would also net the Knights wins over Southern Miss and Tulsa (and possibly Tulsa again or Houston in the Championship Game). The question I'm posing is: Would a one-loss Central Florida team (assuming Texas loses only once or twice) have a better BCS argument than an undefeated Hawaii team and would they get a bid?
Posted by matt at 3:57 PM