In Case You Missed It: Week 1

...Michigan went from #5 to out of the top 25. Anyone who thinks Michigan is not one of the 25 best team's in the nation is crazy. 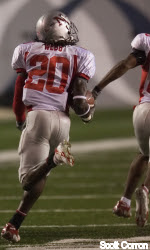 ...Thanks to the heroics of Ladarius Webb (pictured), who returned a pick for a touchdown, another IAA team knocked off a IA team on Saturday. Nicholls State upended Rice 16-14, a game which the Owls could ill-afford to lose if they harbored visions of a second consecutive bowl season. The Colonels also held Rice receiver Jarett Dillard to 5 catches for only 41 yards and ended his streak of consecutive games with a touchdown catch at 15. 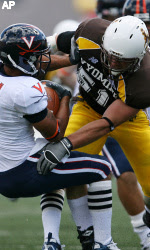 ...A pair of Mountain West teams, Wyoming and BYU, knocked around some of their BCS brethren on Saturday (Virginia and Arizona). The Cowboys held Virginia to 7 yards rushing, 110 total yards, 5 first downs, and only 3 points. Comparatively, Arizona looked like Hawaii against BYU as they gained 32 yards on the ground, 255 total yards, and had 11 first downs. Still, they didn't get on the scoreboard until after more than 59 minutes had elapsed. While it's not as if they stifled offensive dynamos, this has to make fans in Laramie and Provo feel better about their team's chances in the Mountain West, while at the same time making the seat a little warmer for Al Groh and Mike Stoops. 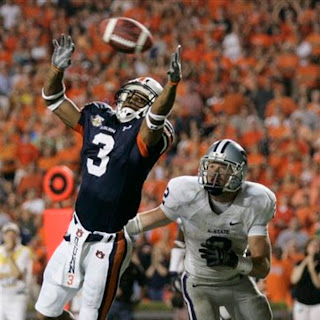 ...If you only glanced at the final score on the bottom of ESPN, you probably thought Auburn was in control for most of their game against Kansas State. If you looked a little closer, or even watched the game, you know Auburn came very close to coming out on the other end. The Tigers defense was stout as usual, holding Kansas State without a touchdown save for one trick play. However, the Auburn offense, behind a senior quarterback no less, gained just 291 yards and scored only one touchdown against a team that gave up 367.5 yards and 29.5 points per game on the road last season. 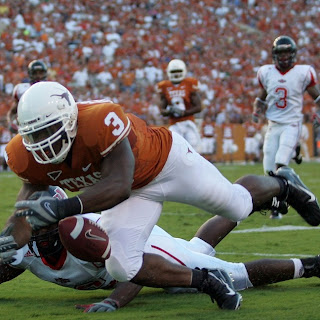 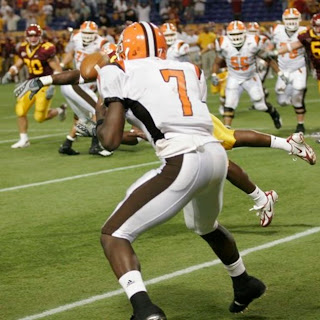 ...The Bowling Green Falcons flew into the Metrodome and left with a win thanks to a successful 2-point conversion (pictured) in the first OT. As should always be the case, decided underdogs should play for the win instead of the tie. 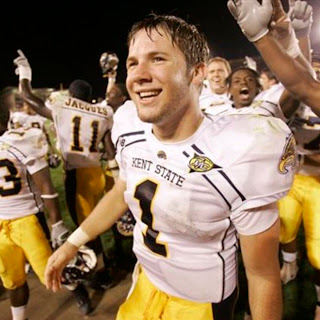 ...While Iowa State may be down, a victory for Kent State over a Big 12 team, especially on the road, is cause for celebration. The Golden Flashes were 1-10 in 2005 and now look poised to compete for the MAC Championship and a bowl bid. 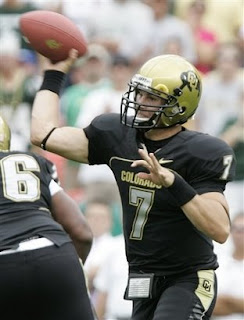 ...In the first game of the 2007 season, the Colorado Buffaloes passed for more yards (201) than they did in any game in 2006. A big reason for that production is redshirt freshman quarterback Cody Hawkins (pictured).
Posted by matt at 5:11 PM