In what I hope to make a new weekly section, I will try to help out the degenerates among my readers by giving you my thoughts on 15 spreads (5 dogs I like, 5 favorites I like, and 5 spreads you should stay away from). Let's jump on in (home teams in Bold).

Mississippi State +18.5 LSU
Two touchdowns and a figgie are a lot to give for a team breaking in a new quarterback on the road. The Bulldogs played much better at the end of last season. Despite finishing 1-4, they were outscored by only 15 points (3 per game) over that span. 4 of those games were against bowl teams and 3 came on the road. I'm not saying the Bulldogs will win, but they will keep it close.

Utah +6.5 Oregon State
In my opinion the Oregon State Beavers are getting way to much regard heading into the 2006 season. True they were 10-4 last season, but 3 of their 4 losses were not even close. Boise State humiliated them 42-14, Cal dominated them 41-13 (in Corvallis), and UCLA thumped them 25-7. They were 5-1 in close games, winning once by a single point, twice by two points, and once by three points. They were also +8 on the season in turnovers, a statistic that is highly random, and lose their senior quarterback, Matt Moore. Their statement win against Southern Cal came at home by two points in a game where they were out gained by 141 yards and out first-downed by 7 (23-16). Yet they won thanks to 4 Trojan turnovers (3 fumbles). The team on the other sideline come Thursday returns 16 starters, including 10 on offense and is no stranger to playing Pac-10 teams on the road (3 such road games in the last 5 years).

Syracuse +3 Washington
The Washington Huskies, a team that returns just 12 starters, are favored on the road. Incidentally, they have won just 4 road games in the past 4 seasons, and have not won a non-conference road game since 2000. To be fair, the Orange from Syracuse will not make anyone forget the 4 Horsemen, but they are usually pretty tough at home. Even during their 1-10 debacle of 2005, they finished 1-5 at home, but were only outscored by 5.8 points per game (4 of those home games were against 2005 bowl teams). Last season they finished 3-3 at home, including a near upset of Iowa. The Carrier Dome is certainly not a place where you want to break in a new quarterback, which is what the Huskies will likely be doing (red-shirt freshman Jake Locker).

Memphis +3 Mississippi
Last season, in Oxford, the Rebels won despite being out gained (374-337), out first-downed (24-20), and needed a creative fumblerooskie to beat the Tigers by 3. This season, the game is in Memphis and the Tigers look to be one of the nation's most improved teams. Last season their 2-10 record was greatly attributable to their poor record in close games (0-5) and the fact that they had to break in a new quarterback, but also a new running back to replace NFL Draft pick DeAngelo Williams. I will be shocked if Memphis does not win straight up.


Duke +4 Connecticut
Duke's last win over a Division IA team came on November 13th 2004 at home against Clemson. Clemson starts with a 'C'. Since that day, Duke has yet to play another team whose name begins with a 'C' at home. Until Saturday. In all seriousness, the Blue Devils bring back 11 starters on offense, were a tough luck 0-3 in close games in 2006, and are facing a team that was not exactly dominant last season. The Huskies 3 Division IA wins were by a combined 22 points over teams that finished 5-7, 3-9, and 6-6. They won one road game all season and even lost to Syracuse. Expect to see this come Saturday evening. 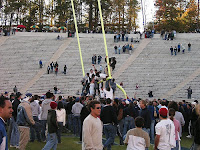 Miami -18 Marshall
The Hurricanes will be back with a vengeance in 2007, and their return to power begins at home against a mediocre Conference USA team. Marshall finished 1-6 on the road last season (5-7 overall). All 6 of their losses were by at least 10 points, and their lone victory came by 7 over UAB (3-9 record).

Colorado -2.5 Colorado State (at Denver)
Colorado will be one of the most improved teams this season, thanks to simple regression (in this case progression) to the mean on third down. The Buffs were the only college football teams to finish in the bottom 10 in terms of disparity in third down passing efficiency on both offense and defense compared to overall passing efficiency. This game should be close (last 5 decided by 7 points or less), but the Buffs will prevail by at least a field goal.

TCU -21 Baylor
The Baylor Bears return only 11 starters, including just 4 on offense, and travel to Fort Worth to face perhaps the nation's best mid-major team. TCU returns 9 starters from a defense that allowed a paltry 12.3 points per game in 2006. Even the most ardent Baylor-backer could not expect the Bears to score more than 10 points against TCU. Thus the Horned Frogs need only score about 31 to cover the number.

NC State -8.5 Central Florida
Both these teams appear to be vastly improved of their 2006 incarnations. The Wolfpack were a tough luck 2-7 in close games in 2006 and were -11 in turnover margin. They should fair much better in those categories in 2007. They also nabbed a proven coach, Tom O'Brien to instill some much needed discipline that was noticeably absent in the Chuck Amato era. The Golden Knights have been solid on the road the last two seasons (6-6), but all their wins have come over fellow mid-majors.

Florida State -3 Clemson
Like their rivals in Miami, the boys from Tallahassee will be back in a big way in 2007. Clemson has actually won 3 of the last 4, including the last two in Death Valley. However, the Nole defense is not who you want to start your first college game against which is exactly what Cullen Harper or Willy Korn will be doing.

Five to Steer Clear Of

Notre Dame -3 Georgia Tech
If Vegas really goes by the logic that home field equals 3 points, then these two teams are basically equal. 2005 springs to mind here. Over the opening weekend, Georgia Tech was a dog, albeit a big one, at Auburn. Auburn was replacing their starting quarterback and the Jackets held them in check by a score of 23-14. Of course, the Jackets would also beat Miami that season and then lose to Utah by 28 in the bowl. Georgia Tech is practically begging to be picked here, but a quick glance of Charlie Weiss' track record shows 5 of his 6 losses have come to teams that played in BCS bowl games. Against non-elite teams, Notre Dame has lost only to Michigan State in under Weiss.

BYU -4.5 Arizona
Examining only last season's records make this look like a total mismatch. BYU was one of (if not the) best mid-majors last season, finishing 11-2 and trouncing Oregon by 30 in their bowl game. Meanwhile, Arizona finished only 6-6 and were not invited to postseason play. However, one of BYU's losses last season actually came to Arizona in the opening game by a 16-13 score. This year the venue shifts from Tucson to Provo, but the Cougars will be without quarterback John Beck (drafted by the Miami Dolphins), while the Wildcats look to be at least marginally improved from last year.

Auburn -13.5 Kansas State
In my opinion, both these teams are over-rated heading into 2007. Auburn finished 11-2 in 2006, but was 5-0 in close games, and were crushed at home by a combined score of 64-25 in their two losses (Arkansas and Georgia). Meanwhile, Kansas State went 7-6, despite being outscored on the season, thanks to great special teams and a 3-0 record in close games. All 6 of their losses were by at least 14 points, and they were only 1-3 on the road.

Minnesota -14.5 Bowling Green
The Bowling Green Falcons should be on of the nation's most improved teams in 2007. However, their opponent has been dominant over non-BCS teams (with the exception of their squeaker over North Dakota State last season), especially at home.

I was def. glad to see you were wrong about my team, but I hate it that Wake didn't pull it out or at least cover against BC.