The goal of every statistical analysis in sports is to find out how 'good' a team really is. Many formulas exist to rank teams, and now I am throwing my hat into that ring. I would like to reveal to you what I like to call the Pythagenmelt rankings. While it may sound like some sort of grease fest you are likely to be served at Carl's Jr., it is actually a college football power ranking system. It is basically, the Pythagorean Theorem with schedule strength adjustments (and a few other minor adjustments). It is displayed like a team's winning percentage. For example, a team with a Pythagenmelt rating of .500 is an average team. This season, beginning with the first week in October (after most teams have played 4 or 5 games), I will be posting the Pythagenmelt rankings of the current season here at Statistically Speaking on a bi-weekly basis. However, as a little off season exercise, I calculated the Pythagenmelt rankings for all 119 teams from last season (before the bowls) to get a good idea of how the ratings would work. I am pretty satisfied with the results. Below you will find the rankings for every team by conference, with a national rank in parentheses. A short commentary will follow each conference, listing some observations I found while doing the rankings. I invite you to join the discussion in the comments section with feedback and/or suggestions. One final note, the rankings only include games against Division IA foes. All games against other competition are excluded. 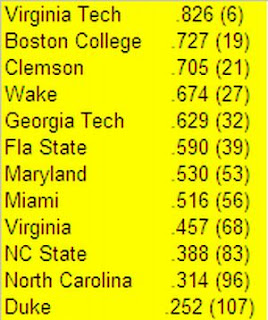 No real surprises here in the ACC. I don't think most people believe that Wake Forest and Georgia Tech were the best teams in the ACC last season. 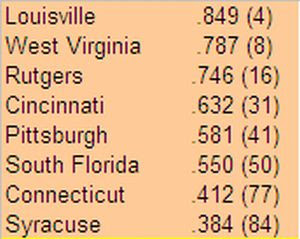 The one team that jumps out here is the Cincinnati Bearcats. Consider this: Of their five losses last season, four came to Ohio State (Pythagenmelt #1), Louisville (#4), Virginia Tech (#6), and West Virginia (#8) all on the road. While their head coach, Mark Dantonio, made what may end up being a lateral move to Michigan State, they nabbed one of the best lesser-known big time coaches in Brian Kelly from Central Michigan. Fresh off a MAC Championship in his third year at Central Michigan, Kelly, like Bobby Petrino at Louisville is a great hire to take this program to the next level. He also won two national titles at Division II Grand Valley State. This year they drop the Buckeyes and Hokies from the non-conference slate and get both Louisville and West Virginia at home. I'm not saying they will win the Big East, but keep your eye on them. 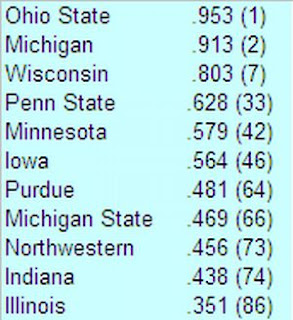 Remember,these are pre-bowl rankings, so the debacle in the desert is not included for Ohio State. Minnesota was much better than their record indicated in Glen Mason's final season. Methinks the Gopher faithful will find out how good of a coach Mason was very soon. 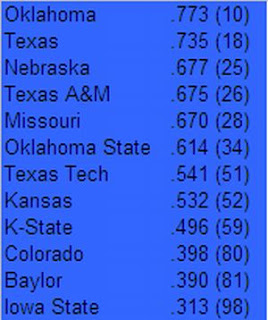 Could Texas Tech fall to fifth place in the Big 12 South in 2007? Performance-wise, they were already there in 2006. 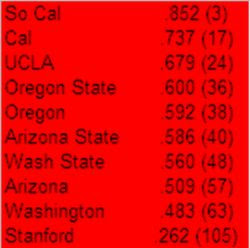 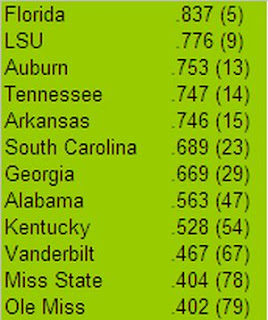 The best conference by far in 2006. Seven teams finished in the top 30, and the worst team in the conference finished #79. I was surprised by the Vols high ranking. The SEC East will be a bear in 2007, with Georgia, Florida, South Carolina, and Tennessee all harboring realistic hopes of taking the crown. Don't be surprised if Phil Fulmer is in Atlanta in early December for the second time in four seasons. 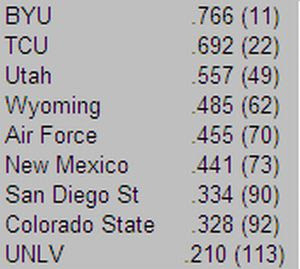 At the top the Mountain West was a BCS-caliber league. Elsewhere...Not so much. BYU is actually the highest rated mid-major from last season. And that's before their dominating bowl win over a solid Oregon team. 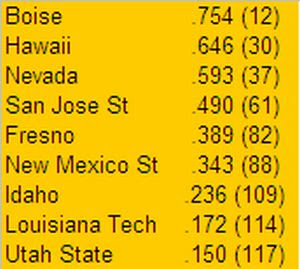 In you were wondering how Boise could be ranked behind BYU, a fellow mid-major with two losses, have a look at all the teams below Nevada. Three WAC schools finished 109th or worse, and only a third of the league had a Pythagenmelt winning percentage greater than .500. 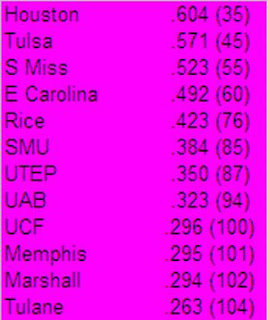 Not a lot to say here. The best team won the league and gave a pretty good SEC team all they could handle in the bowl. 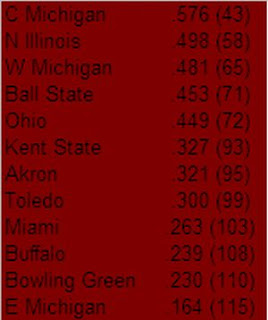 Not a banner year for the MAC as only Central Michigan finishes with a winning Pythagenmelt winning percentage. 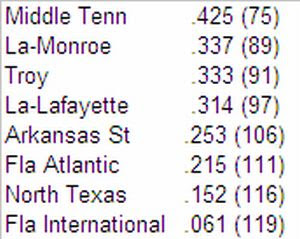 Once again the weakest of all the conferences. Louisiana-Monroe had some hard luck last season. Five of their 8 losses were by a combined 15 points, including a pair of two-point losses to Kansas (#52) and Kentucky (#54).
Posted by matt at 10:55 AM

IF the ranking are accurate, then why would the #5 team (Florida) kill the #1 team (OSU) in last years MNC??