Better Offense on Third Down 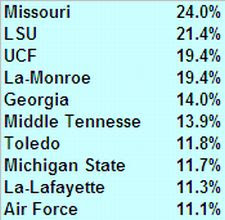 What this table means is that on third down, Missouri had a team quarterback rating 24% better than their quarterback rating for all passes thrown. Some observations: The LSU defense should once again be nasty, but the offense will definitely feel some growing pains this year as their extremely efficient third down performance is unsustainable. Plus they are sans JaMarcus Russell and four other starters on offense and lose their offensive coordinator. Don't pencil them in as SEC West champion just yet as Alabama and Arkansas will certainly have a say in the matter. Over in the Sun Belt, you can count on Middle Tennessee to not repeat as Sun Belt co-champions. They also lose five starters on offense (one of them senior quarterback Clint Marks). Finally, over in the MAC, Toledo will not be a cinch to win the West or even *gasp* return to bowl eligibility. They do have eight starters returning on offense, but the offense was actually more efficient on third down than all other downs and they still averaged their lowest point total in the Amstutz era. Couple those facts with non-conference games against Purdue, Kansas, and Iowa State and the four other tough teams in the MAC West (Central and Western Michigan, Ball State, and Northern Illinois), and it's not a stretch to predict two losing years in a row for the Rockets.

Worse Offense on Third Down 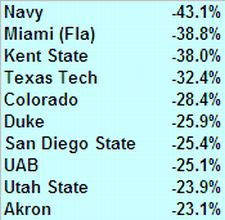 Look past Navy's ranking as they are a wishbone team that would obviously struggle in long yardage passing situations (typically what third down passes are) and look at the Hurricanes. The 'Canes averaged an anemic 19.6 points per game last season (take out the Florida A&M and Florida International games and that number drops to an embarrassing 15.4). This year they have nine starters back on offense including incumbent senior quarterback Kyle Wright. The Miami defense was still strong last season (15.5 point allowed per game--good for 13th nationally), so any offensive improvement, and there has to be after the abysmal showing on third down in 2006, and the 'Canes are instantly a contender in the ACC. Randy Shannon will probably get a little too much credit for what is actually regression (or in this case progression) to the mean, but either way look for Miami to give Virginia Tech all they can handle in the ACC Coastal Division. At #4, it's hard to believe Texas Tech could be fourth from the bottom in any offensive categories, but there they are. With arguably the best quarterback Mike Leach has ever had running his system (Graham Harrell), look for the Red Raiders to top last years average of 32.5 points per game and jump Texas A&M in the Big 12 standings (more on that later).

Better Defense on Third Down 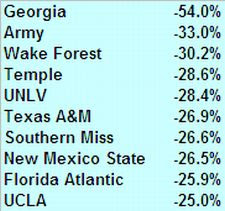 That Georgia number is unbelievable. Remember, negative numbers are better on defense (Georgia limited opponents to a quarterback rating 54% worse on third down than all other combined downs). The Bulldogs were also on the better offense list earlier. While the Bulldogs offense may improve since sophomore quarterback Matthew Stafford has a year of seasoning, the defense, with only four starters back is sure to regress. On third down, Georgia held opponents to a quarterback rating of 46.3. Overall, Georgia's opponents had a quarterback rating of 100.6. Sample size is not an issue either as Georgia faced 98 passes on third down (342 overall). That third down number has to come down, and so do Georgia's chances of winning the SEC East. If you were wondering how little old Wake Forest won the ACC, here's your answer. The Deacons will flirt with bowl eligibility this year, but won't come close to the magic of last season. Down at #6 are the Aggies from Texas A&M. The offense should improve under junior quarterback Stephen Mcgee, but the defense with the third down regression and loss of five starters should not. The Aggies will probably not be favored in any Big 12 road game (Texas Tech, Nebraska, Oklahoma, and Missouri), so don't be surprised if they top out at six wins. Finally at #10 is UCLA. They do have a some positive indicators, especially with an astounding 20 starters back! However, their defense was not as good as it seemed last season. UCLA will be better than 7-6, but anyone dreaming of an undefeated showdown with Southern Cal on December 1st had best wake up.

Worse Defense on Third Down 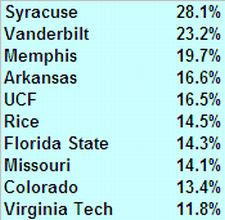 Bowl eligibility for Vanderbilt? It's not out of the realm of possibility with a non-conference slate of Richmond, Eastern Michigan, Miami (Ohio), and Wake Forest (all at home). They also get Ole Miss and Kentucky at home in conference play. Assuming they win 3 of 4 in non-conference play, and knock off the Rebels and Wildcats, that leaves one more win for a possible bowl bid. Perhaps Georgia on homecoming? Memphis will be back to bowl eligibility after a 2-10 season in which their defense gave up over 30 points per game. If Florida State returns to the ACC Championship Game, it will be because the defense, still good last season (19.8 points allowed per game--37th nationally) improves on third down and becomes outstanding again. Colorado at #9 appears on both the worse offense and worse defense lists. They are the only team to appear on both worse lists, so expect some improvement in Boulder, and if things break right, the Buffs could be in the Big 12 Championship Game. Look out for Virginia Tech. They had the nation's best defense (in scoring and total) last season despite being substantially worse on third down.
Posted by matt at 9:56 AM