Wide receiver is often the ultimate 'me first' position on the football field. The NFL is littered with prima donnas who strut their stuff and demand the ball (see Owens, Terrell and Johnson, Keyshawn). Today we'll look at some of the more under-appreciated stars of the college gridiron. 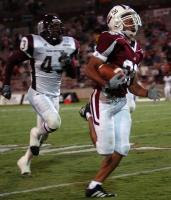 All Chris Williams did last season was lead the nation (not the conference, but the nation) in both receptions and receiving yards . He hauled in 92 passes for 1425 yards and 12 scores. He grabbed 10 passes or more in 3 games, and had at least 100 yards in 7 games. He also rushed for 53 yards on five carries, returned 6 punts for 92 yards, and 13 kickoffs for 301 yards. That's quite a season. And going into last year, the slight (5-8 155 lbs) Williams, had only 12 career grabs. Williams will probably not match his numbers from 2006 (the Aggies do a good job of spreading the ball around), but he can take solace in the fact that the Aggies stand a great shot at getting to a bowl for the first time since 1960.

In 2006, Sapp finished second in the Sun Belt in receiving yards. He caught 43 passes for 796 yards and 3 touchdowns. He topped the 100-yard mark only twice, but also came close twice (98 and 96 yards). His average of 18.51 yards per catch was tops in the Sun Belt among players with enough receptions to qualify making him one of the best big play threats in the league. Like Williams, Sapp is only a junior and with the Warhawks entire offense returning this season, look for him to top his solid numbers from 2006. 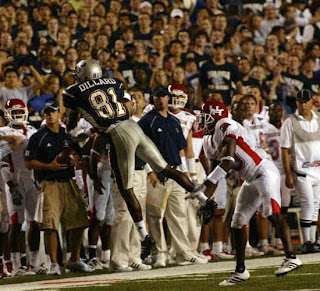 Dillard played a big role in getting the Rice Owls back to a bowl game for the first time since 1961. He led Conference USA in receptions (91), finished second in receiving yards (1247), and led in touchdown catches (21). Dillard caught at least one touchdown pass in all 13 games and has a streak of 15 straight games with a touchdown reception stretching back to 2005 (second longest streak in NCAA history). He had six 100-yard receiving games and never had fewer than 3 receptions in any game. The Owls were very fortunate last season (5-1 in close games) so another bowl bid is probably out of the question, but Dillard should continue to put up great numbers in his junior season.
Posted by matt at 6:53 PM

Always a pleasure to hear back from Franklin J. Feces.