In Case You Missed It: Week 11 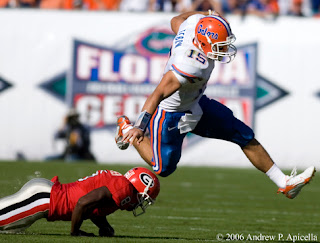 ...Yes he's only a sophomore, but if the Heisman goes to the nation's most outstanding player, well Tim Tebow is that guy. The table below lists the national rankings for Tim Tebow and Dennis Dixon in 5 important statistical categories. Their actual statistics are in parentheses.

Tebow ranks ahead of the consensus Heisman favorite Dennis Dixon in nearly every statistical category. The only category where Dixon ranks ahead of Tebow is in number of interceptions (3 versus Tebow's 5).

...Speaking of Florida and the questions surrounding Meyer and his spread offense when he first arrived on campus. Yes the spread will still work against great athletes once you get great athletes of your own. The Gators average 28.6 points per game and 373.4 yards per game in Meyer's first season (2005). In 2006 they averaged 29.7 points per game and 396.1 yards per game. Keep in mind both those teams were quarterbacked by the less than nimble Chris Leak. This season, with a mobile quarterback, the Gators are averaging 41.3 points per game and 450.2 yards per game. So a coach with a unique offense who has been successful at football outposts is now successful running the same offense in the big time. Nebraska take note. This man should be your next football coach. 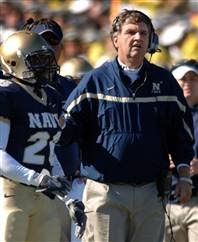 ...A pair of afterthoughts in BCS conferences have turned things around over the last month after horrendous starts. After starting the season 1-6, including a loss to Division IA Northern Iowa, the Iowa State Cyclones have hung tough with both Oklahoma and Missouri and scored upsets over Kansas State and Colorado. How have they improved in the last month versus the first half of the season?

Iowa State's offense has improved slightly (in both yards per play and total yards), while the defense has regressed slightly in terms of yardage allowed and improved slightly in terms of yards per play. So with only marginal improvement, how has Iowa State gone from being one of the worst teams in a BCS conference to a team that can go toe to toe with Oklahoma and Missouri. Turnovers. After giving the ball away almost 3 times per game in their first 7, they are only averaging one giveaway per game over the past 4.

Meanwhile in Raleigh, NC State has won 4 in a row after a 1-5 start and now a bowl game is within reach. How have they done it? Let's take a look.

The Pack have improved substantially on offense and defense, especially on defense where they are allowing one whole yard less per play. But another real difference, just like Iowa State, has been turnovers. The Pack gave the ball away almost 4 times per game over the first 6. They have cut that total to a shade over 1 per game over the last 4.
Posted by matt at 11:45 AM