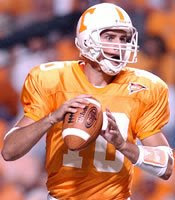 The Gators lone conference loss was by a single point to Alabama. However, these were not the typically dominant Gators the Steve Spurrier era. They won only 2 conference games by more than 20 points, with the largest margin of victory 28 points. All 6 of Tennessee's conference wins came by at least 14 points. 4 came by more than 20 points and their 2 losses were by 2 and 4 points.

Nebraska was much more dominant against Big 12 teams than Kansas State. 5 of their 6 conference wins came by at least 18 points. Kansas State had some big wins in conference play as well (3 by 21 or more), but also won 3 squeakers. The beat Missouri by 4, Texas Tech by 5, and Nebraska by a single point to hold the tie-breaker advantage.

Surprise, surprise. Georgia is not the Pythagorean Division champ. Georgia's Pythagorean winning percentage is .664 which is only about 9 one hundredths of a win less than Florida's. Tennessee was actually outscored on the year in conference play! When you lose games by 39 and 24 points, that can happen. Half of the Vols' SEC wins (3) came by a combined 6 points (2 in OT). They did beat Georgia and Arkansas by 21 points apiece, but good teams simply don't lose games by 40 points. Florida's 3 conference losses came by 3, 4, and 12 points. They also won 3 conference games by at least 20 points.

LSU dropped a 3-point decision to Auburn early in the year that ended up being the difference in the SEC West race. 3 of Auburn's 6 wins came by 5 points or less and they did not win a conference game by more than 17 points. LSU won 2 conference games by at least 27 points and 4 by double digits.

The game between these two schools was the beginning of the end of the Frank Solich era. Nebraska came into that game undefeated, having not won a conference game (or any game) by fewer than 10 points. Colorado beat them by 26. However, in their first 7 conference games, the Buffs biggest win in conference play had been by 14 points. Their only loss was also a 34 point drubbing at the hands of Texas. They did exact some measure of revenge in the Big 12 Championship Game by upsetting the Longhorns 39-37 and costing them a shot at the national title.

The 2004 season by the Tennessee Vols and their subsequent expectations for 2005 was the impetus for my first blog post. 6 of the Vols' 7 conference wins were by 6 points or fewer. Their lone comfortable win was by 14 points. They also suffered their lone conference loss by 24 points. Georgia on the other hand lost by 5 to Tennessee and by 18 to eventual SEC champion Auburn, but also won 3 conference games by at least 29 points.

Another appearance by the Tennessee Vols. The 2001 Florida Gators are probably one of the best teams to not play for a national championship and certainly the best team to not win their conference title. Florida won 5 of their 6 conference games by at least 29 points, including a 29-point win at eventual SEC champion LSU. They won 4 conference games by more than 30 and 2 by more than 50. Their 2 losses came by a combined 5 points. Tennessee on the other hand was not nearly as dominant. They won only one conference game by more than 11 points. 4 of their wins were by 8 points or less, including the division-deciding 2-point win over the Gators.

Colorado had a fine season in Big 12 play in 2002 as 5 of their 7 wins were by more than 10 points. The Wildcats from Manhattan simply had a phenomenal season running up the score. All 6 of their conference wins were by at least 34 points. Their two losses came by 4 and 3 points.

Technically, Alabama was both the division champ and the Pythagorean champ, but alas they were on probation.

The 9 teams on this list other than this year's Tennessee Volunteers went a combined 1-8 in their conference championship games. They were outscored on average by a little more than 9 and half points per game. In other words, don't expect a Tennessee upset victory on Saturday. And one final note, just so no one can accuse me of bias. The Wake Forest Demon Deacons' 2006 Atlantic Division title ranks 11th on the list of worst division champions. They had roughly one fewer Pythagorean win (.125 less Pythagorean winning percentage) than the Pythagorean champion Clemson Tigers.
Posted by matt at 10:29 PM

Matt, are you sure about your SEC East 2002 stats? Georgia won the East that year.

I enjoy your blog a great deal, by the way (no irony intended).

i finally used your blog title, check it out