One of my favorite set of posts from last offseason was the conference recap using SDPI. SDPI is a statistic I borrowed from Eddie Epstein that he used in his book, Dominance, to rank pro football's all-time greatest teams. SDPI stands for Standard Deviation Power Index and looks at how teams performed relative to the league average (or conference average in this case) and standard deviation in terms of points scored and allowed. The more standard deviations a team is above the mean, the better they are, and vice-versa. Here is the link to last year's SEC post. As you can see, SDPI was a useful tool in predicting some of the rise and fall among the SEC's teams. In the interest of providing an even better offseason analysis, I will now be conducting another SDPI, this time for yardage. It is calculated in the same manner as the SDPI for points, but will obviously be measured against the conference mean and standard deviation for yards. Think of it this way: Points are the end result and yards are the means to that end. Thus, looking at both sets of data, we can get an even better idea about which teams are likely to improve or regress in 2008.

To refresh your memory, here are the 2007 SEC Standings. 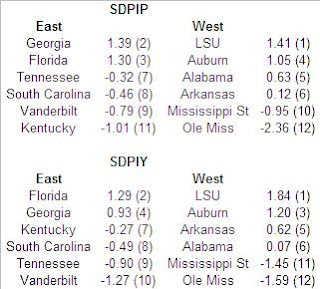 The big surprise when it comes to achievement versus performance from the SEC this past season is the Tennessee Vols. The Vols won the SEC East despite being only the 3rd best team in the division based on points and the 5th best team based on yards. Tennessee won the division because of some good fortune in one-score games. They knocked off South Carolina by 3 points in overtime, slipped by Vanderbilt by a single point, and edged Kentucky by 2 points in overtime. In all, the Vols were 3-0 in one-score conference games until the SEC Championship Game where they nearly derailed LSU's title aspirations until a late mistake by Erik Ainge.

Another team that defied their performance was Mississippi State. The Bulldogs parlayed a very good defense (5th in the SEC in points and yards allowed), great luck in one-score conference games (3-0), and some timely plays by said defense and their special teams (see below) into a 4-4 SEC record despite the impotence of their offense.

Best Offense: Florida 1.47 (SDPIP) and 1.43 (SDPIY)
Will the spread work against superior athletes? The answer is a resounding 'Yes', at least if you have a quarterback the caliber of Tim Tebow. Note the jump in yardage and points below once Tebow replaced pocket passer Chris Leak.

Worst Offense: Ole Miss -1.45 (SDPIP), Mississippi State -1.60 (SDPIY)
The State of Mississippi: As inept at offense as they are at educashun.

Best Defense: Auburn 2.08 (SDPIP) and 2.13 (SDPIY)
The defense has been world class for sometime now, making up for an offense that has not been close to competent the past 2 seasons.

Worst Defense: Kentucky -1.54 (SDPIP), Tennessee -1.10 (SDPIY)
Both teams had pretty good offenses that were able to offset their lack of production on the other side of the ball. Is it any surprise the game between these two teams was a 52-50 overtime shootout?

Hardest Schedule (based on cumulative SDPI of opponents): Ole Miss 4.16 (SDPIP) and 3.23 (SDPIY)
The Rebels played in the tougher division and in their intra-division games drew both Florida and Georgia, the two strongest teams from the East.

Easiest Schedule: Arkansas -2.01 (SDPIP), Georgia -1.96 (SDPIY)
Let me preface this by saying that there are no easy conference schedules in the SEC. That being said, the Dogs and Hogs had much easier schedules than their conference brethren. SDPIP believes Arkansas had the easiest schedule and Georgia the second easiest. SDPIY has their roles reversed. Georgia played in the easier division where only one opponent rated as above average (Florida). In their games against the West, they did face Auburn, the second best team in the division, but they also drew Ole Miss; winner of zero SEC games. Arkansas played in the tougher division, but in their games against the East, drew 3 of the 4 below average teams (Kentucky, South Carolina, and Tennessee).

East
Florida/Georgia
Both teams return a ton of talent on both sides of the ball. You know Florida's key skill position players: Tim Tebow, Percy Harvin, Kestahn Moore, but improvement on the other side of the ball will determine whether the Gators live up to the preseason hype. The Dogs also bring back their fair share of skill position players: Matthew Stafford, Knowshon Moreno, and Mohamed Massaquoi as they look to return to the SEC Championship Game for the 4th time in 8 seasons under Mark Richt. But their real strength last season was the defense. In fact the offense was below average in terms of yards gained relative to other SEC teams. To take the SEC East this season, they need some offensive improvement; in particular some improved quarterback play. The much ballyhooed Stafford finished 91st in the NCAA in completion percentage (55.7%) and 56th in passing efficiency (128.92).

West
?
LSU was the favorite heading into the offseason, but with the Ryan Perrilloux situation, the top of the SEC West could be in flux.

Alabama, Ole Miss, South Carolina, and Vanderbilt
Performance-wise, the Tide were a middle of the pack team in 2007, finishing 5th in SDPIP and 6th in SDPIY. Still, if a few bounces had gone their way, they could have finished with 5 or 6 conference wins. The Tide were only 2-4 in one-score conference games. Improvement in the always fickle 'close games' department would not be a total shock in 2008. 9 starters return on offense in 2008, including senior quarterback John Parker Wilson and running back Terry Grant. Losing receiver DJ Hall will hurt, but Hall practically disappeared over the Tide's final 5 games in 2007. After nabbing 13 catches in a rout of Tennessee, Hall managed just 17 catches the rest of the year. The defense, the strength of last year's team, gets 6 starters back and should remain strong. Couple that with what is widely regarded as one of, if not the, best recruiting classes, and you have all the ingredients, for contention in the SEC West. The Rebels of Ole Miss will be hard-pressed not to improve as they failed to win a solitary SEC game last season. True, they were the worst team in the conference, but the difference in their performance and that of their rivals in Starkville wasn't extremely different. The Rebels' biggest undoing was their turnover margin--an SEC worst -11 in conference play, that further exacerbated their poor down-to-down performance. In all likelihood, that margin will trend back toward mediocrity this season. The Rebels also upgraded at the head coaching position, swapping a crazy cajun for a Nutt. Ole Miss probably won't get to bowl-eligibility in 2008, but they should win a few conference games and look toward 2009 with high hopes. The Gamecocks lost their last 4 SEC games and last 5 games overall to finish 6-6 and 3-5 in SEC play. The primary culprit was luck (with injuries, turnover margin, and ill-timed false starts by the opposition) and in their last two conference losses, the defense.

That unit brings back 10 starters in 2008 and can only improve. Senior quarterback Blake Mitchell is gone, but he was never a superstar in Spurrier's offense. The conference road schedule outside of Florida is not too challenging (Vanderbilt, Kentucky, and Ole Miss), so the Gamecocks should be headed to another bowl game. And finally we have Vanderbilt. The 'Dores have been oh so close to snagging a bowl bid over the past few seasons. The main culprit has been an absolute failure to have any success in one-score games. Last year, Vandy was 0-3 in one-score conference games, bringing their record under Bobby Johnson in such games to 4-17, easily the worst in the SEC. 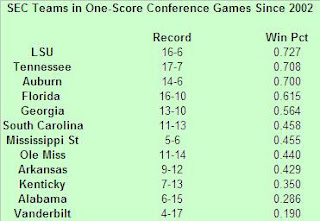 Last season Vandy had a pretty strong defense (4th in the SEC in yards allowed and 6th in points allowed), but the offense was non-existent, finishing 11th in both yards and points. The good news for Vandy is that the offense should improve with both Mackenzi Adams and Chris Nickson back to try their hand at quarterback. Receiver Earl Bennett and running back Cassen Jackson-Garrison are gone and their is turnover on the offensive line, but it will be hard for the Vandy offense to be worse than it was last season despite the personnel losses. On defense, the secondary returns intact, and the best players on the line (Broderick Stewart) and in the linebacking corp (Patrick Benoist) are back. Plus the schedule is very manageable. Duke, Rice, Miami (Ohio), and Wake Forest are the non-conference slate, so a 3-1 record is an attainable goal. In conference, the 'Dore have winnable road games against Ole Miss, Missisippi State, and Kentucky, plus home dates with South Carolina and what should be a weakened Tennessee squad. All that has me calling for the unthinkable. 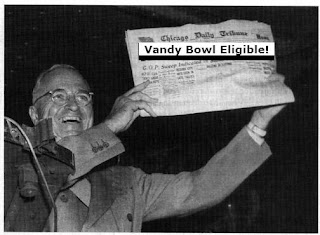 Kentucky, Mississippi State, and Tennessee
Kentucky brought a ton of talent back from their 2006 bowl squad, yet finished with the exact same record overall and a game worse in SEC play. Outside of the monumental upset over LSU, the Cats beat one team with a winning record before the bowl game against short-handed Florida State--Arkansas. Kentucky was outgained and outscored by their conference opponents and once again sported a horrendous defense (10th in the conference in yards allowed and 12th in points allowed). Now quarterback Andre Woodson, running back Rafael Little, receiver Keenan Burton, and tight end Jacob Tamme are all gone. As Sam Cooke said, a change is coming. In terms of yardage, Mississippi State was one of the SEC's worst teams in 2007. They gained the fewest in conference play, and despite a defense that was solid, they were outgained by over 73 yards per game. The defense does get 8 starters back and may be even better in 2008, but the Bulldogs were downright lucky in almost all 4 of their SEC wins in 2007. Auburn outgained them by 110 yards, but committed 5 turnovers in a 5 point defeat. Alabama outgained them by 59 yards, but lost thanks to the game-changing interception mentioned earlier and viewable above. Even the worst team in the conference outgained them by 36 yards, but lost thanks to the punt return shown above. This is not to say the Bulldogs did not deserve their wins in 2007, but it their 4-4 SEC record is not indicative of how they played down-to-down last season. Finally, we have the Tennessee Vols. My very first post on this blog examined Tennessee's extremely fortuitous 2004 season and what it meant for 2005. Tennessee's 2007 season was not quite as fortuitous, but they were still extremely lucky to be playing for the SEC Championship in December. Tennessee was not even close to being the best team in the SEC East in 2007. Their 39 point loss to Florida drives that point home in a way words cannot. Tennessee allowed more yards than any SEC team in 2007. More than the morose units in Oxford and Lexington. That unit may improve in 2008, but it won't become LSU over night. The offense gets everyone back except for the most important cog, quarterback Erik Ainge. And don't forget about the loss of offensive coordinator David Cutcliffe, who left the Vols for bluer pastures in Durham, North Carolina. The Vols may very well be better performance wise in 2007, but they will not match their 6 conference wins as the one uncontrollable element--random chance--returns to normal.
Posted by matt at 7:31 PM

great site. can you add a feed?