In addition to the SDPI posts, another offseason interest of mine has been to look at how each IA conference has shaken out since 2005. I chose 2005 as the starting point because that was the year the ACC expanded to 12 teams, the Big East added 3 new members and booted Temple, Conference USA added a championship game, the Mountain West added TCU, the WAC looted the Sun Belt after several of its members joined Conference USA, and the Sun Belt added 2 independents from Florida (FAU and FIU). Since 2005, there has only been one change in any IA conference. That was the expansion of the MAC by a single team with the addition of Temple. We've already examined both the ACC and the Big East, so now we'll turn our attention to every southern man's favorite whipping boy--the Big 10. First here are the cummlative Big 10 standings since 2005.

Not surprisingly, the teams with the best overall record has defended their home turf well. Ohio State and Penn State have both won 14 of their 16 conference home games since 2005. What is a little surprising is that Ohio State has lost only once on the road in conference play. That means they have twice as many home losses as road losses! If you've read the other league wrap-ups, you may remember that the other tops teams are just as good on the road as they are at home. West Virginia has the exact same home and road conference record while Virginia Tech is only one game better at home against the ACC than they are on the road. Perhaps this is an indication that homefield advantage means less to elite teams. That is, they enjoy the proverbial bullseye they take with them on the road and are actually just as likely to fall asleep and lose to a lesser team at home as they are to fall to a motivated underdog on the road. As the other conference breakdowns come, we'll see if this is an actual trend or just a function of the order of the breakdowns. The biggest discrepancy between home and road record belongs to Penn State and Wisconsin. The Nittany Lions are 14-2 in Happy Valley, but a rather mediocre 9-7 away from home. Meanwhile, Wisconsin is 13-3 in Madison (with two home losses in 2008), but a below average 7-9 away from home. Among bad teams, Indiana has the biggest discrepancy as they are a somewhat dangerous 6-10 at home, but only 2-14 away from home.

Now here is how homefield advantage shakes out in the Big 10 (in conference play only) with respect to the nation at large (with rank out of the 11 IA conferences in parentheses).

Overall, the Big 10 has been mediocre in terms of homefield advantage. However, it is interesting to note that while the ACC and Big East have had their whipping boys (Duke and Syracuse are a combined 3-27 at home versus conference foes the past four seasons), the Big 10 teams with the worst home records are Illinois and Minnesota at 5-11. That winning percentage is more than three times the mark of the aforementioned Blue Devils and Orange.

Next up is how each Big 10 team stacks up offensively for each season. This is the ranking of yards per game in conference play. 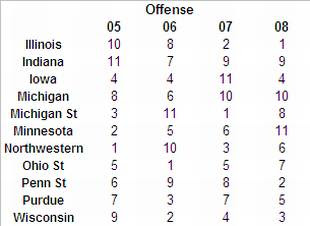 There's a lot of ebb and flow for the offenses in the Big 10. Two of the top three offenses from 2005 (Northwestern and Michigan State) ended up being the bottom two offenses in 2006. The next season, they both rebounded to rank in the top three once again. Illinois went from being one of the worst offenses in the conference at the beginning of the Ron Zook era to one of the league's best. Call it the 'Juice Effect'. This table and the subsequent one for defense show which side of the ball Ohio State and Penn State have used to dominate the conference (hint: its not offense). This table also shows a disturbing trend for Michigan at the conclusion of the Lloyd Carr era. Rich Rod was unable to reverse that course during his first season on the job. 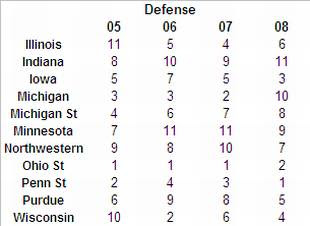 Why did Michigan fall from perennial bowl team to also-ran in 2008? The defense fell apart. As we noted earlier, the offense had been in a steady decline at the end of Lloyd Carr's tenure. However, the defense remained among the best in the conference and kept Michigan near the top of the league standings. When the defense degenerated and the offense remained stagnant, the Wolverines fell to the bottom of the standings. The Buckeyes have owned the defensive side of the ball throughout Jim Tressel's tenure, and when the offense cooperates (see the number one ranking in 2006), an undefeated season is sure to follow. Besides Ohio State and Penn State, the rest of the conference has seemed to alternate strong defensive showings with mediocre to weak performances. That is of course, with the exception of Indiana, Minnesota, and Northwestern. The Hoosiers have finished last in defense once and never fared better than eighth in the conference in yards allowed. Minnesota has finished last twice, with their best placing being seventh. Northwestern has yet to finish last, but they have been between seventh and tenth each season. This is somewhat ironic considering they are coached by a former linebacker.
Posted by matt at 4:14 PM