In addition to the SDPI posts, another offseason interest of mine has been to look at how each IA conference has shaken out since 2005. I chose 2005 as the starting point because that was the year the ACC expanded to 12 teams, the Big East added 3 new members and booted Temple, Conference USA added a championship game, the Mountain West added TCU, the WAC looted the Sun Belt after several of its members joined Conference USA, and the Sun Belt added 2 independents from Florida (FAU and FIU). Since 2005, there has only been one change in any IA conference. That was the expansion of the MAC by a single team with the addition of Temple. A few weeks ago, we looked at the ACC since 2005. Now, we shall turn our attention to the league that the ACC pillaged and allegedly left in ruins--the Big East. First here are the cummlative Big East standings since 2005.

West Virginia has thoroughly dominated the league since 2005. Their record is five games clear of second place Rutgers, and interestingly, they are the only team to have a winning record in conference play in each season since 2005. It also pays to mention here that the Big East has done pretty well for itself since being left for dead following the exodus of Boston College, Miami, and Virginia Tech. The conference has won three of its four BCS bowl games since 2005, two of them as heavy underdogs. In addition, if not for one gaffe by its eventual conference in champion in 2006 and again in 2007, the Big East winner would have been playing for all the marbles in early January. Big East teams have also posted a respectable 13-7 record in bowl games since 2005. How has the Big East been able to maintain a BCS-worthy level of success since losing three of its marquee programs?
1. Its members have hired good coaches (for the most part).
While Rich Rod was hired before the the exodus, he is an example of an excellent coaching hire as he put the Mountaineers in position to contend for not only a conference, but national title as well. Brian Kelly is another up-and-comer who may eventually prove to be too big for Cincinnati, but for the time being, he has been an upgrade over Mark Dantonio (though that is in no way an insult to Dantonio). Randy Edsall is another solid coach, who has guided Connecticut as they have transitioned from IAA newbie to BCS conference team in only a decade. And who can forget Greg Schiano, who has done his best Bill Snyder impression, and made Rutgers a legitimate threat to win the conference. Of course, there have been some questionable hires as well (Greg Robinson, Bill Stewart, and Dave Wannstedt to name a few), but for the most part, the positions have been filled with competent men.
2. They grabbed the right teams from Conference USA.
Cincinnati is a large state-supported institution in a football crazed state. Louisville was arguably the best team in Conference USA when they were poached by the Big East. South Florida may have been a reach at the time as they were only 4-7 in their second season of play in Conference USA, but the Bulls, like the Bearcats, are a large state-supported school in a football hotbed.
3. They gave Temple the boot.
The Owls have very little in the way of gridiron history, so throwing them out was addition by subtraction.

West Virginia has defended its homefield very well, with an 11-3 record (tops in the league), but it should also be noted they also have the exact same record on the road! Every team except Syracuse has a winning record at home. The biggest discrepancy between home and road record belongs to the either the Connecticut Huskies or the Louisville Cardinals. Connecticut is a solid 8-6 at home since 2005, but only 3-11 on the road (with two of the wins coming this past season against basement dwellars Louisville and Syracuse). Louisville has gone 10-4 at home since 2005 (9-1 before their disastrous 1-3 home record in 2008), but only 5-9 away from Papa John's Stadium.

Now here is how homefield advantage shakes out in the Big East (in conference play only) with respect to the nation at large (with rank out of the 11 IA conferences in parentheses).

As you can see, with the exception of 2007, the Big East has consistently been one of the most home-friendly conferences. From 2005-2008, they rank behind only the Big 12 in homefield advantage, with home teams winning nearly 60% of the time in conference showdowns. If we remove the record of the moribund Orange from Syracuse, that number climbs to 66.2% (nearly two wins for every one loss).

Next up is how each Big East team stacks up offensively for each season. This is the ranking of yards per game in conference play. 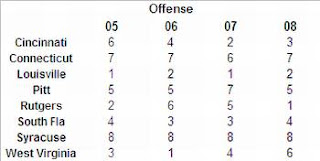 Even with the loss of offensive guru Bobby Petrino following the 2006 season, Louisville has remained among the most prolific offenses in the league. The reason for their decline will be revealed in the next paragraph. The influence Brian Kelly has had on the Cincinnati offense is readily apparent as they have finished in the top three in offense in the conference during both of his seasons as head coach despite starting a new quarterback in 2007 (Ben Mauk) and several new quarterbacks in 2008. One remarkable fact is the consistency with which several teams have finished in the final offensive rankings. Syracuse has been dead last each season, Pitt has been fifth three times in four seasons, Connecticut has finished seventh three times in four seasons, and South Florida has fnished third or fourth each season. 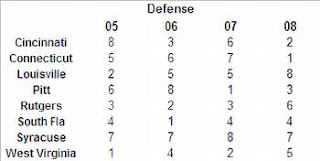 While the majority of the offenses in the Big East have been very consistent, the defenses have been the exact opposite. One season after finishing last in the conference in defense (2006), Pitt regrouped and posted the best defense in the league. Connecticut nearly equaled that feat by posting the second worst defense in 2007 (thank you Syracuse) and rebounding to feature the league'e best defense in 2008. Cincinnati has also gone from terrible (2005), to good (2006), to below average (2007), and back to good again (2008). Rutgers has also seen their defense go from a strength (2005-2007) to a relative weakness. However, the biggest dropoff has been from the Louisville Cardinals.

The Cardinals allowed about 100 more yards per game to Big East foes than they did in 2005. It also doesn't help that their turnover margin has been trending downward at the same time.

It's been a perfect storm of attrition, injuries, and turnovers that has Steve Kragthorpe squarely on the hot seat in 2009.
Posted by matt at 2:08 PM