In addition to the SDPI posts, another offseason interest of mine has been to look at how each IA conference has shaken out since 2005. I chose 2005 as the starting point because that was the year the ACC expanded to 12 teams, the Big East added 3 new members and booted Temple, Conference USA added a championship game, the Mountain West added TCU, the WAC looted the Sun Belt after several of its members joined Conference USA, and the Sun Belt added 2 independents from Florida (FAU and FIU). Since 2005, there has only been one change in any IA conference. That was the expansion of the MAC by a single team with the addition of Temple. We've already examined the ACC, Big East, Big 10, and Big 12. Now I'll try and shed my East Coast bias by looking at the Pac-10. First here are the cummlative Pac-10 standings since 2005. 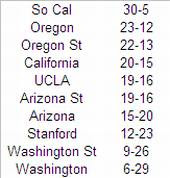 Remember the Florida State Seminoles in the mid-to-late 1990's? If they played in a stronger conference (and on the west coast), they would be the present day Trojans. Southern Cal has thoroughly dominated the league, but thanks to the relative strength of the other nine teams, the Trojans have surprisingly lost five conference games. See the table below for each team's scoring margins in Pac-10 play since 2005. 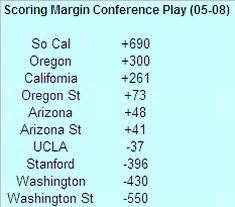 That +690 means Southern Cal has won their conference games in the past four seasons by an average of 19.7 points per game. 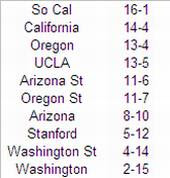 You'll notice that half the league's teams have played 17 home games, and the other half have played 18. That is because the Pac-10 instituted a nine-game conference schedule in 2006 (to ensure each team plays every team each season) which means half the league's teams play five home games, while the other half only play four. Those teams with five home games play four the next and vice-versa. Since that scheduling policy has been in effect for three seasons, the home schedule is not even. Southern Cal's lone home loss? Maybe you remember it.

The biggest discrepancy between home and road record belongs to the Cal Golden Bears. The Bears are a robust 14-4 at home (with two of the losses coming to Southern Cal), but only 6-11 on the road for a difference of 8.5 games. UCLA receives an honorable mention, as they are 13-5 at home, but equally as poor as Cal (6-11) on the road for a difference of 7.5 games. Surprisingly, half the league is either as good or better on the road as they are at home. Arizona is half a game better at home, Oregon State is half a game worse, and the three bottom-feeders (Stanford, Washington, and Washington State) are all 1.5 games worse at home.

Now here is how homefield advantage shakes out in the Pac-10 (in conference play only) with respect to the nation at large (with rank out of the 11 IA conferences in parentheses).

As you can see homefield advantage in the Pac-10 has improved a little each season, culminating with home teams winning at the second best clip of any conference in 2008 (second to the Sun Belt). That's a far cry from 2005, when home teams didn't even win half their games.

Next up is how each Pac-10 team stacks up offensively for each season. This is the ranking of yards per game in conference play. 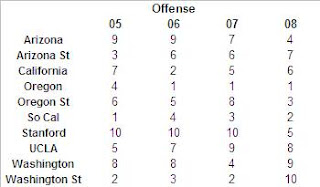 Surprisingly, Oregon has had the best offense in the Pac-10 for three years running. That's quite a coupe for the departing Mike Bellotti, to beat Southern Cal in any statistical category. Notice how much Arizona improved when they brought in Sonny Dykes to be their offensive coordinator prior to the 2007 season. Could Dykes, the son of former Texas Tech coach Spike Dykes, and disciple of Mike Leach and Hal Mumme, be running a team of his own in 2010? California's relatively pedestrian finishes in offense under Jeff Tedford (alleged offensive guru) are a tad surprising. In a moment, we'll see that defense played a much larger role in the Golden Bears continued resurgence. Give Jim Harbaugh some credit. He has raised the Stanford offense from the dead, and made it the team's strength. If only Washington State had some semblance of a defense when Alex Brink played quarterback. Brink became the full-time starter in 2005, and its clear the offense, under his guidance, was more than capable of getting the Cougars to the postseason. 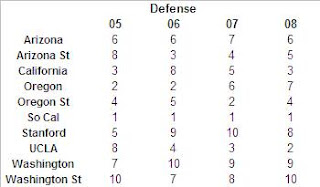 Southern Cal has had the top spot on lock down for the past four seasons. The only other defense that has consistently been among the best in the conference is Oregon State's. The Beavers have been in the top half of the conference defensively each of the past four seasons. This is somewhat ironic considering head coach Mike Riley's forte is offense (he calls the plays). As mentioned previously, another offensive minded coach (Jeff Tedford) has seen his defense become the team's greatest asset. Aside from a poor performance in 2006, The Cal defense has been amongst the best in the Pac-10. And don't look now, but New Mexico State may have hired themselves one hell of a defensive coach. DeWayne Walker took over the defensive coordinator duties for the UCLA Bruins prior to the 2006 season and produced solid to stellar defenses each year. He'll be running a BCS conference team by 2013.
Posted by matt at 4:21 PM

Great article. I love the SS series you're doing. You might like this post I did about USC, the Pac-10 and the BCS over at my blog, Three's A Pattern:

FYI, you should also look at how many points a team outscored their opponents. For example: in 2008 Oregon State outscored their opponents in the 4th quarter 116-76 and a total score for all games played for the season 397-300. Also look at Yards allowed by a defense in rushing and passing. Cause those are factors too. Just letting you know you're missing a few important facts that help a team win ball games, avg pts means nothing to pts held to and yards held to.